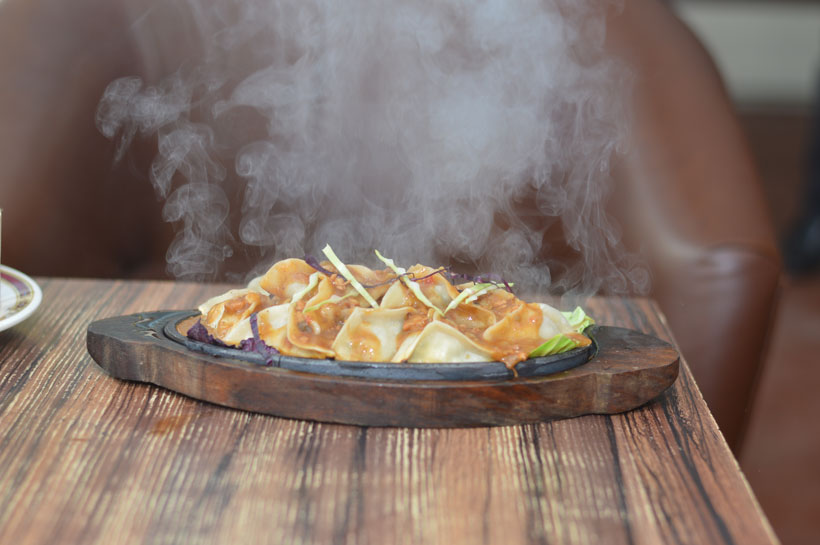 Bajeko Sekuwa doesn’t really need an introduction. It’s already a go-to spot for most city dwellers whenever they wish to satisfy their carnivorous cravings. But, by the looks of it, the popular sekuwa joint isn’t taking the acclaim for granted. Keen to entice more customers as well as indulge their regulars, we heard that the Anamnagar branch of the restaurant had just recently added a few new items to their menu.

So when we went to check it out, coincidentally, it turned out to be exactly what we needed after a motorbike ride on a cold, January morning: momos. But these weren’t your regular plate of steaming momos; they sizzled, they were submerged and they looked like stars.

Bajeko Sekuwa is obviously not the first place to take every Nepali’s favorite meal and put their own little spin to it but Gaurav Khatiwada, representative from the restaurant, claims to be confident with their recent results. Apparently, after a series of tests and experimentations with various ingredients, they have managed to procure that distinct flavor that Bajeko’s is famous for, even in their new momo dishes.

Well, there was only one way to find out. When we sat down for the tasting, the entire restaurant’s attention was immediately drawn to the sizzling dish that was being ushered in from the kitchen. The entrance of the sizzler momo was certainly impressive, but what about the taste, you ask?

I’m happy to inform, it didn’t disappoint. The momos which were steamed, and then slightly fried, had a mild taste. It came with a special sauce that had been made of Bajeko’s exclusive masala and minced meat. That’s right, the minced meat wasn’t only in the momos but also in the sauce mixture. Further, the chef was very generous with the helpings. The momos came with some cabbage dressing and rich, flavorful sauce poured all over it. Needless to say, the components of the dish really complemented one another.

It was surprising just how much a dish we have had hundreds of times before can taste completely different with some slight tweaks of the ingredients. The next item, soup momo, proved to be another testament to that.

As some might suspect this isn’t a version of jhol momo. This dish actually has its momos completely submerged in a proper chicken soup. Custom made for cold and gloomy winter days, it came to us in a ceramic bowl that was covered with a lid. Points to whoever thought of the presentation here because, the moment the lid was taken off, the steam rising from the soup and the momos made for a very inviting and appetizing sight.

Chef Ramesh Thapa Magar tells us that this soup momos recipe was inspired by the weather and diet in the upper mountainous regions of Nepal. With ingredients such as garlic and hot chili, he set out to make a dish that warmed up the body from the insides.

Another distinct factor about this dish is its meaty flavor. Compared to this, the sizzler momos were mild in taste but lovers of non vegetarian food certainly won’t have anything to complain about here either.

Star momo: Rs 199
Similarly, Bajeko’s new star momos were quite a mouthful of delight as well. The best part about the dish had to be its dipping sauce. As we all know, the dipping sauce can make or break a momo experience and even though the kitchen staff at Bajeko’s tried to push the boundaries with a peanut and coconut powder base sauce, the risk has paid off. The combination of the unique flavors hit you almost instantly and it’s unlike any that’s available elsewhere.

The only drawback is that, for the time being, these new options at Bajeko’s is only available for chicken momos and are not served at all the other restaurant branches.

Since these are still early days for the new menu, it’s yet to be fully put into practice.

However, we have been assured that it will soon be incorporated into the menus at other outlets as well.

Until then, you can head to Bajeko Sekuwa, Anamnagar, to try out exciting new renditions of a dish we, Nepalis, never seem to get enough of.

Rethinking pasta primavera to make it taste like spring

As expected from Trishna Gurung, she continues giving us reasons to appreciate the essence of our folk tunes. She has... Read More...