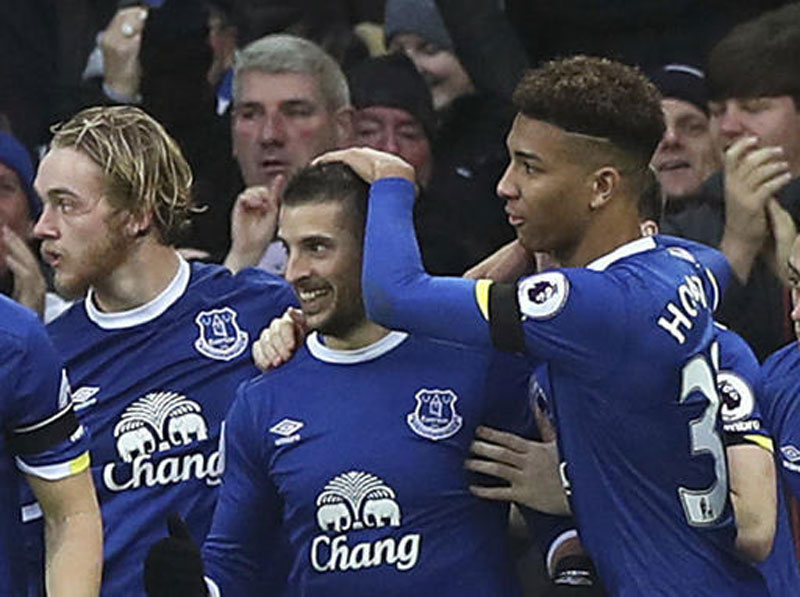 LIVERPOOL, Jan 15: Manchester City endured more misery on Merseyside by losing 4-0 at Everton in the Premier League on Sunday, leaving Pep Guardiola's team out of the Champions League positions after the heaviest league defeat of the Spaniard's coaching career.

City has now lost three of its last four matches away, with the latest setback for Guardiola coming at the hands of a team managed by his former Barcelona teammate, Ronald Koeman. The team had dropped out of the top four — into fifth place — following wins for Tottenham and Arsenal on Saturday, and is now 10 points behind first-placed Chelsea.

Lukaku sidefooted home a square ball from Mirallas to put Everton ahead in the 34th, with the move sparked by Davies intercepting Gael Clichy's ball forward from left back.

Starting for a second straight game, Davies was everywhere — even clearing Bacary Sagna's header off the line just before halftime at Goodison Park.

Ross Barkley slipped in Mirallas to score with an angled shot in the 47th before the best goal of the match, Davies dinking the ball over goalkeeper Claudio Bravo and inside the near post to crown an impressive individual display.

Lookman, signed from Charlton this month and on as a substitute for his Everton debut, completed City's misery four minutes into injury time by shooting through Bravo's legs.

Manchester City manager Pep Guardiola was banned for two matches by UEFA on Monday after being found guilty of communicating... Read More...