Even candidates don't know how to vote! 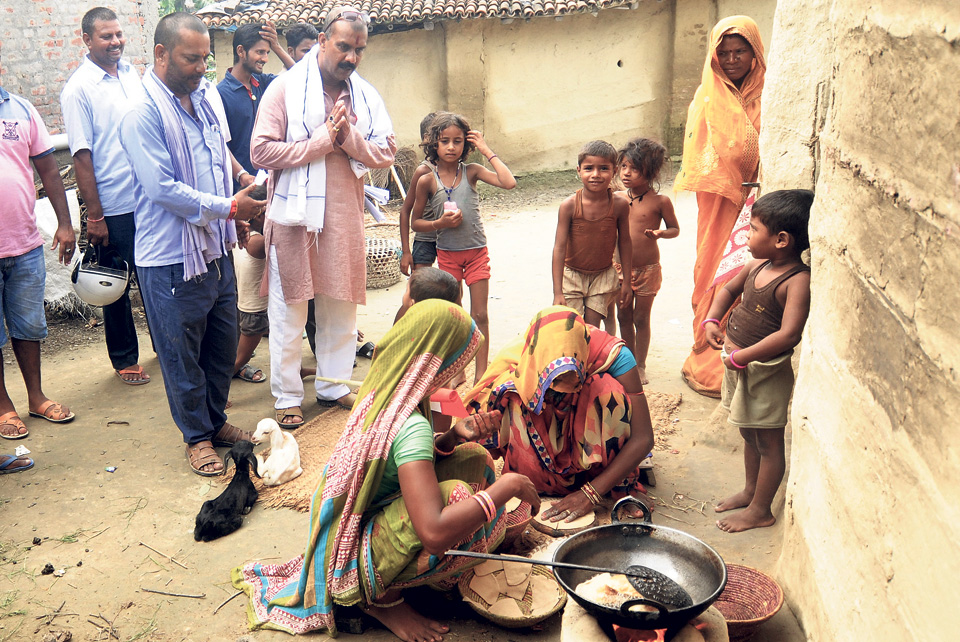 Mayoral candidate (white scarf) of CPN-UML canvassing votes at a locality in Sabagadha of Rautahat district on Monday. Province 2 going to the local elections on September 18.

DHANUSHA, Sept 12: Sumitra Devi Pasman has filed her candidacy for the post of ward member of Nagarain Municipality-9 in the upcoming third phase of local elections. These days she has been visiting every doorstep of her locality in order to persuade the voters. It might be hard for some to believe but Sumitra Devi who has filed her candidacy from the CPN-UML doesn't know what her election symbol is. While other candidates tell people their election symbols during their poll campaigns, she just urges them to vote for her.

When asked about her party and how people can vote her she hardly pronounced the name of her party, but could not tell anything about the voting process. According to her, she decided to fight for the post as per the request of her friends. Before the announcement of elections she had never imagined that she will ever be a part of politics.

Similarly, Sonabati Devi Pasman of the same village these days is also seen actively involved in poll campaigns. She has registered her name for the Dalit member of her ward from CPN (Maoist Centre). There is not much time left for elections but she remains answerless when people ask her about how they can vote her. She laments that the large size of the ballot paper is also posing problems in the voting process.

Hira Devi Sada, 48, who will be contesting for the post of woman member of Sabaila Municipality Ward-12 from CPN (Maoist Centre) is also unaware about   the voting process. “After spending more than half of my life in fields and kitchen, I never imagined myself visiting locals and asking them for votes like ministers,” she said. She thought of making the most out of the opportunity provided to the Dalit people.

There are so many candidates like her who have no idea about how to cast votes also because the election has been announced after an interval of twenty years. Recently, the mayoral candidate of CPN (Maoist Centre) organized a training session for teaching the voters of Sabaila Municipality to cast votes in the elections. They provided the voters with a model ballot paper and stamp.

Those candidates who even didn't vote themselves

BHAKTAPUR, May 30: Any candidate contesting in an election hopes to garner as many votes as possible and get elected... Read More...