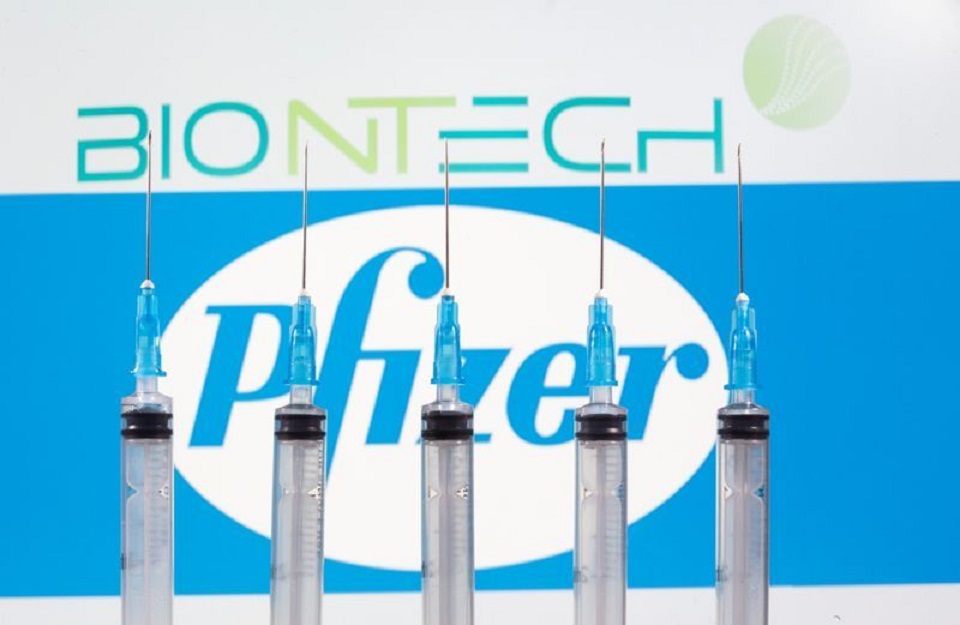 Syringes are seen in front of displayed Biontech and Pfizer logos in this illustration taken November 10, 2020. REUTERS/Dado Ruvic/Illustration

BERLIN/BRUSSELS, Dec 16: Europeans are set to start getting coronavirus vaccines before the new year after the regional drug regulator accelerated its approval process following the launch of immunisation campaigns in the United States and Britain.

The European Medicines Agency (EMA) said an expert panel would convene on Monday Dec. 21 to evaluate the vaccine made by U.S. company Pfizer and German partner BioNTech. It had previously said the meeting could be as late as Dec 29.

While EMA’s mandate is to issue recommendations on new medical treatments, the European Commission has the final say on approval and typically follows EMA’s advice.

EMA said its expert meeting was brought forward after the companies had provided more data, as requested, and the EU Commission would fast-track its procedures to rule on approval “within days”.

Germany should start giving coronavirus shots 24 to 72 hours after the BioNTech/Pfizer vaccine gets EU approval and could begin as soon as Christmas, Health Minister Jens Spahn said on Tuesday.

EU Commission President Ursula von der Leyen echoed those sentiments by saying on Twitter “(It is) Likely that the first Europeans will be vaccinated before end 2020.”

Germany, France, Italy and five other European states will coordinate the start of their vaccination campaigns, the countries’ health ministers said in a joint statement on Tuesday.

The countries will promote “the coordination of the launch of the vaccination campaigns” and will rapidly share information on how it is proceeding, said the statement, released by Italy.

The statement was also signed by the health ministers of Germany, France, Belgium, Luxembourg, the Netherlands, Spain and EU neighbour Switzerland.

Rising infection rates and tighter lockdown measures in many European nations have added to the pressure on the EMA to act as quickly as possible and cast a shadow over the Christmas celebrations.

The EMA added any approval would come with a safety monitoring plan, manufacturing controls, an investigation plan for use in children and binding obligations by the manufacturers to provide more efficacy and safety data.

Britain was the first to approve the shot for emergency use on Dec. 3, followed by Canada on Dec. 9 and the U.S. Food and Drug Administration (FDA) on Dec. 11.

EMA said in early December it planned to issue its view on the BioNTech/Pfizer vaccine by Dec 29, and on another candidate developed by Moderna by Jan. 12.

Both U.S. biotech firm Moderna and Pfizer-BioNTech have reported vaccine effectiveness in trials of well above 90% - an unexpectedly high rate. Any side effects have eased quickly and had not been serious, they said.

BioNTech reiterated it was on track deliver 50 million doses globally this year, for 25 million two-dose courses needed for immunisation.

Ready a master plan on railways to connect Nepal with Europe, Africa: House panel to govt

KATHMANDU, Dec 22: The Development Committee of the Legislature-Parliament has directed the government to prepare a master plan on railways... Read More...