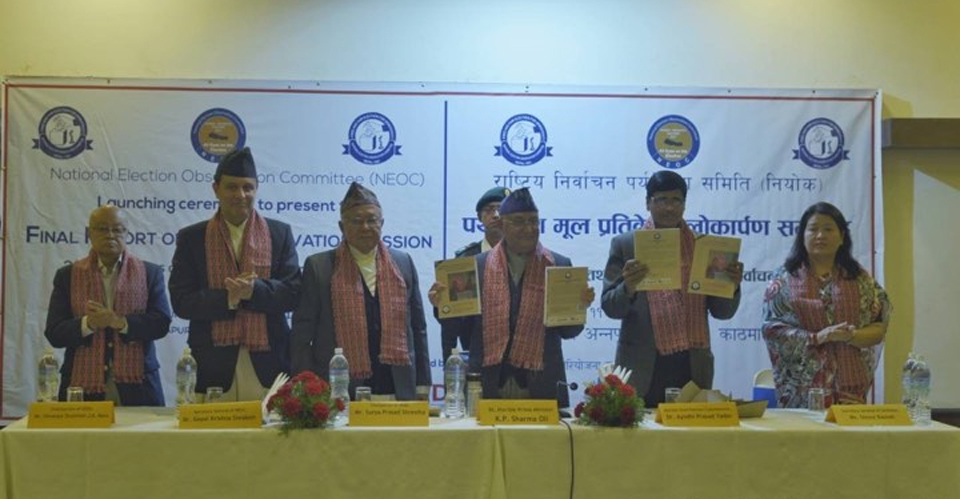 "There are some who think that they can do anything in Nepal under the pretext of poverty and backwardness existing in our society. EU's election observation report has undermined Nepal's sovereignty and its achievements. It's an insult to Nepal."

At a function organized in Kathmandu on Sunday to release the final report of a domestic poll observing group, National Election Observation Committee, the prime minister accused the EU of insulting Nepal for being poor and backward.

"There are some who think that they can do anything in Nepal under the pretext of poverty and backwardness existing in our society. EU's election observation report has undermined Nepal's sovereignty and its achievements. It's an insult to Nepal," said the prime minister expressing his dissatisfaction over the EUEOM's failure to correct the report. "I was expecting that the EU would correct its report. Instead, it [EU] gave yet another arrogant statement. I would like to request EU to think again seriously, Nepal is sovereign."

The EU and Nepal government are at odds over after the EUEOM questioned some of the constitutional provisions including the "quota system" for Brahmins and Chhetris in the federal parliamentary and provincial assembly. The EUEOM had suggested excluding the representation of Khas Arya community from the 'quota system' saying they are already "well represented".

"The quota system, in an effort to promote gender and social inclusion, also includes groups that are already well-represented," the report states, adding, "This is arguably in contravention of international standards on equality, as affirmative action measures are foreseen only as a means to promote equality."

The poll observing group has also accused the Election Commission (EC) of indulging in non-transparency in procuring election logistics and educating voters. The EC has already rejected the report of the EUEOM and the latter is under pressure to retract its report after all stakeholders including the government and EC rejected the report.

During Sunday's function, Prime Minister Oli also alleged that EUEOM through the report attempted to take revenge against the government after some of its poll observers involved in religious conversions were expelled. "Some people came here under the guise of poll observers and the government deported them when it noticed that they were advocating for secularism in Nepal," said Prime Minister Oli.

He also claimed that Nepal is secular in true sense because leaders here take oath in the name of the people.

The premier also challenged the European nations to increase representation of women in their state structures to match that of Nepal.

Women comprise 33 percent of the total members of the federal parliament whereas nearly 40 percent of the elected representatives in the local elections are women.

Oli also claimed that Nepal is more liberal than any western country and 70 percent of voter turnout was historic in the context of nearly 15 percent of the eligible voters currently abroad for employment.

"Nepal's foreign policy is friendly towards all," reaffirms PM Dahal