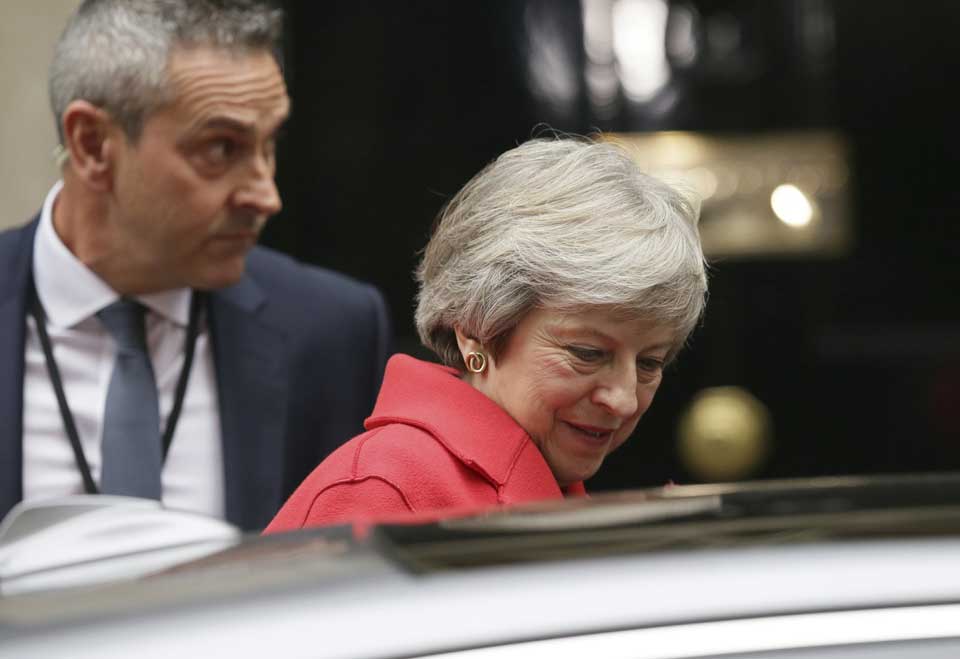 LONDON, Nov 15: Two British Cabinet ministers, including Brexit Secretary Dominic Raab, resigned Thursday in opposition to the divorce deal struck by Prime Minister Theresa May with the EU — a major blow to her authority and her ability to get the deal through Parliament.

As pro-Brexit Conservatives called for a no-confidence vote in their leader, a defiant May insisted Brexit meant making “the right choices, not the easy ones” and urged lawmakers to support the deal “in the national interest.”

“The choice is clear,” May told the House of Commons. “We can choose to leave with no deal. We can risk no Brexit at all. Or we can choose to unite and support the best deal that can be negotiated — this deal.”

But the resignations, less than a day after the Cabinet collectively backed the draft divorce agreement, weakened May and emboldened her rivals within her Conservative Party.

Leading pro-Brexit lawmaker Jacob Rees-Mogg called for a vote of no-confidence in May, a move that could trigger more demands for her ouster.

Under Conservative rules, a confidence vote in the leader is triggered if 15 percent of Conservative lawmakers — currently 48 — write a letter to the party’s 1922 Committee of backbenchers, which oversees leadership votes.

Rees-Mogg said in his letter that the Brexit deal was “worse than anticipated” and May had lost the confidence of her lawmakers.

Only committee chairman Graham Brady knows for sure how many letters have been sent, but Rees-Mogg’s letter is likely to spur others to do the same.

Raab said in his resignation letter that “I cannot in good conscience support the terms proposed for our deal with the EU.”

“I cannot reconcile the terms of the proposed deal with the promises we made.”

Raab is the second Brexit Secretary that May has lost — David Davis, who like Raab backed Brexit in the U.K.’s June 2016 referendum on its membership of the EU, quit in July of this year.

Work and Pensions Secretary Esther McVey followed Raab out the door. She said in a letter that it is “no good trying to pretend to (voters) that this deal honors the result of the referendum when it is obvious to everyone that it doesn’t.”

The departures — several junior ministers have also quit — are a further sign that many supporters of Brexit won’t back May in a vote in Parliament on the deal. That prompted a big fall in the value of the pound, which was trading 1.3 percent lower at $1.2829.

Pro-Brexit politicians say the agreement, which calls for close trade ties between the U.K. and the bloc, would leave Britain a vassal state, bound to EU rules that it has no say in making.

Before Parliament votes on the deal — the culmination of a year and a half of negotiations between the two sides — EU leaders have to give their backing. On Thursday, EU chief Donald Tusk called for a summit of leaders to take place on Nov. 25 so they can rubber-stamp the draft deal reached by officials earlier this week.

May has supporters in her party, and they argued Thursday that the alternatives — leaving the trading bloc without a deal or a second vote on Brexit — were not realistic options.

″‘No deal’ is not pretty,” Health Secretary Matt Hancock told BBC Radio 4. “A second referendum would be divisive but not be decisive.”

But May’s chances of getting her deal through Parliament before the U.K. leaves the bloc on March 29 appeared to be shrinking. Her Conservative government doesn’t have enough lawmakers of its own to get a majority, and relies on the support of the Democratic Unionist Party from Northern Ireland, which says it will not back the deal.

Opposition parties also signaled that they would vote against the agreement if it comes before them — most likely in December.

Main opposition Labour Party leader Jeremy Corbyn said May should withdraw the “half-baked” Brexit deal. He said Parliament “cannot and will not accept a false choice between this deal and no deal.”

Ian Blackford, who heads the Scottish National Party in Parliament, said the deal was “dead on arrival” and urged May to stop the countdown clock to Britain’s exit, less than five months away.

“Do the right thing and we will work with you,” he said. “Stop the clock and go back to Brussels.”

Meanwhile in Brussels, Tusk heaped praise on the EU’s Brexit negotiator, Michel Barnier, who had “achieved the two most important objectives” for the bloc — limiting the damage caused by Britain’s impending departure and maintaining the interests of the other 27 countries that will remain in the EU after Brexit.

Addressing the British, Tusk said: “As much as I am sad to see you leave, I will do everything to make this farewell the least painful possible for both for you and for us.”

The deal requires the consent of the European Parliament as well as the British one. The parliament’s chief Brexit official, Guy Verhofstadt, welcomed the draft deal as “the best agreement we could obtain.” Verhofstadt predicted the EU Parliament could approve the deal at the start of next year, well in time of the March 29, 2019 exit.

LONDON, Oct 9: British Prime Minister Boris Johnson is facing a fresh rebellion in his cabinet, with a group of... Read More...