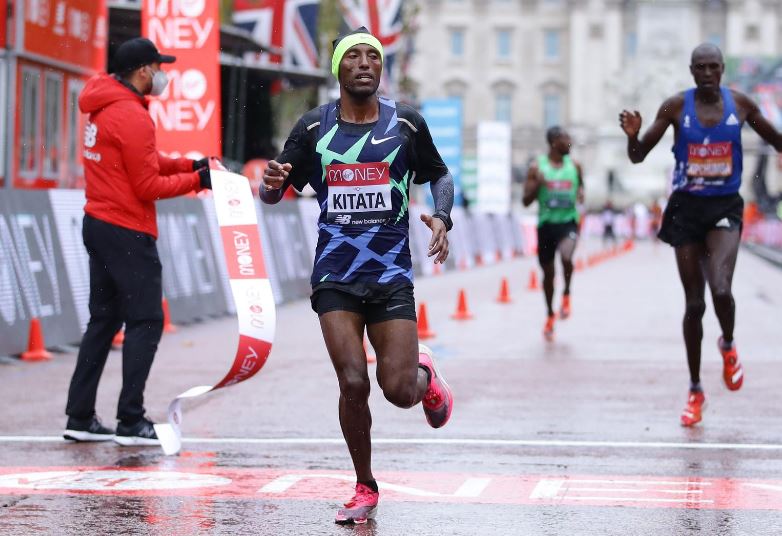 In cold, wet conditions, 24-year-old Kitata edged clear in the final metres to win by one second over Kipchumba in a relatively slow two hours, 05.41 minutes.

Sisay Lemma of Ethiopia was third in 2:5.35, with Kipchoge, the hot favourite, who in his last race a year ago became the only man to break the two hour mark for the distance, eighth in 2:06.49 having suffered cramp and a blocked ear.

In the absence of injured Kenenisa Bekele, Kipchoge was widely expected to lift a fifth London crown but was never able to impose his usual speed in the relentless cold rain.

He was in a pack who went through halfway in just under 63 minutes - very pedestrian in relation to his recent races, not least his official world record of 2:01.39 set in Berlin two years ago.

Ethiopians Lemma and Tamirat Tola, both sporting woollen hats to stave off the cold, took up the running as the field began to realize that, perhaps, Kipchoge was struggling.

They were right. The favourite, whose face never usually gives any indication of suffering, was showing the occasional grimace and he lacked his usual smoothness.

At one point the leaders clocked a five minute mile, a virtual jog at elite level. Then, as never previously seen during his all-conquering career, Kipchoge, 35, broke, dropping back from a pack of six with just over three miles to go.

As the pace eventually picked up it was down to three, shoulder to shoulder, as they entered The Mall in a finish more like an 800m race than a marathon. The tall Kipchumba looked as if he would do it as he edged ahead, but Kitata fought back magnificently to take the tape.

Kitata, who finished second in London in 2018, thanked his missing compatriot for his victory. “Kenenisa Bekele was helping me for this race and he advised me how to run,” he said. “I trained for the same course, I am very happy to win.”

Kipchoge had won 12 of his 13 previous marathons – the blip being a second place behind a then-world record in his second outing over the distance in Berlin in 2013.

“I’m really disappointed, I had a problem with my right ear after it blocked, and then I really cramped and had problems with my hip from about the last 15 km,” he said.

“It’s really cold but I don’t blame the conditions and I’m still there to come back again.”

Earlier, Kenyan world record holder Brigid Kosgei was a comfortable winner of the women’s race in 2:18.58 as American Sara Hall produced a great finish to snatch second from Ruth Chepngetich.

The races, originally postponed from April because of the COVID-19 pandemic, were run over almost 20 laps of a fenced-off course in a “controlled secure biosphere” around St James’s Park.

Although there was no mass field this year, around 40,000 people are running the distance at venues of their choice through the day. They will receive official finisher’s medals and raise millions of pounds for charities hard hit by the cancellation of the April race.

Nepal witnesses sharp decline in COVID-19 cases, only 570 new cases recorded in past 24 hours
35 minutes ago
Marriage attendee found with left leg chopped off
4 hours ago