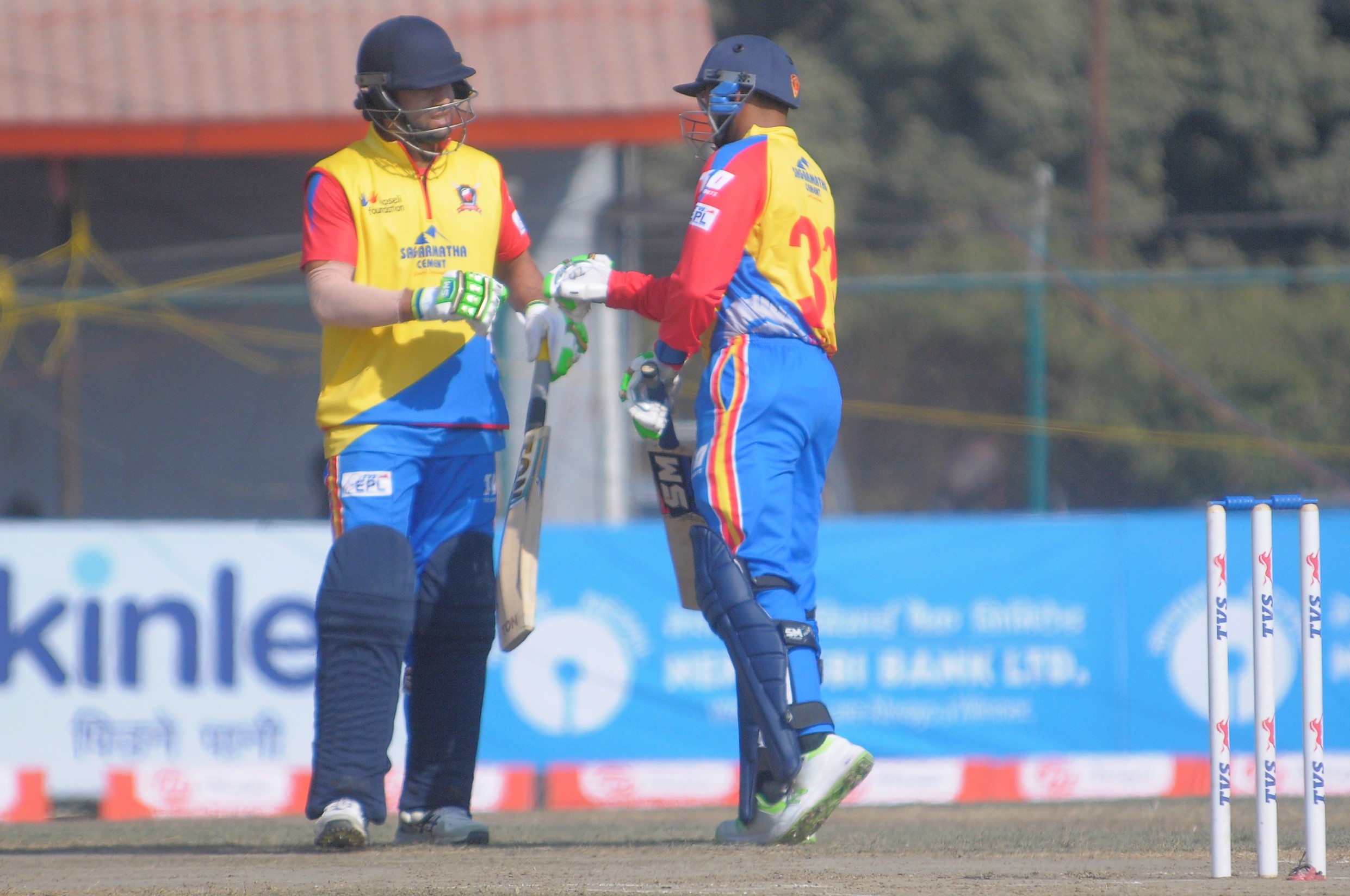 Money per Run
Everest Premier League has been the most expensive tournament for cricket in terms of the auction. Players were purchased for record values. Cricketers like Binod Bhandari and Pradeep Airee were most expensive players of the tournament except the marquee players who were not involved in auctions. Sagar Pun and Aasif Sheikh weren’t far behind too. But EPL hasn’t been kind to them. They have struggled to make runs. Here are the total costs for each run these players have made in EPL so far.
Player (Cost per Run)
Pradeep Airee (NRs 6666)
Binod Bhandari (NRs 8750)
Aasif Sheikh (NRs 4464)
Sagar Pun (NRs 2054)


Reasons for Tigers’ complete failure
1. Injury: Subash Khakurel took manger’s role after being ruled out of the tournament for a hand injury. Replacement player Anil Mandal, who was unsold at first place, could only make 34 runs in two innings with a strike rate around 62.

2. Captaincy: Prithu Baskota, the announced captain for Chitwan was arrested by Nepal police in cheat scam regarding his shares in club Déjà vu. He was replaced by Dipendra Singh Airee who clearly seemed taken aback in such a high profile tournament.

3. Overseas players: Chitwan also had the poorest pool of overseas players in the tournament. Praveen Gupta, the former Uttar Pradesh spinner, was the only performing foreign player who played a vital role in winning the only match of the tournament. Shabez Khan and Pramesh Kumar were only liabilities for the team.

4. Lack of experienced head:  One of the key reasons Chitwan finished last in the EPL 2017. There was no Basant Regmi or Sagar Pun or Karan KC, who were available in the auction, types of experienced guys with the Nepal national team or such premier tournaments. Losing Subash and Prithu certainly didn’t help. They lacked leaders.

5. Poor fielding: Chitwan Tigers, arguably, had the poorest fielding records in the tournament. Drop catches, misfield, overthrows, etc could be seen in every Chitwan match.

Gladiators scour talents
Bhairahawa Gladiators became the team to face Biratnagar Warriors after defeating Chitwan Tigers in the first match of the day 8. Both teams are poles apart in comparison but found their ways to do with their set of available players. While Paras Khadka and boys just needed to turn up and do the basics right, Sharad Vesawkar had to scour to find specific players to do the specific jobs. Eight different bowlers have picked up at least a wicket each for Gladiators in last two matches. In last match Bhuwan Karki didn’t bowl a single over but was called to deliver 4 today. Karki responded by picking up 2 wickets.  Dipesh Shrestha has been their star bowler so far in the tournament but only bowled one over today. Vesawkar also tried his youngsters and fringe players providing much-needed game time in the middle for guys like Rohit and Bhupendra Thapa before the second stage of the EPL. Thapa is their third keeper of the tournament with Puneet Bisht and Prakash KC doing the same job previously. Vesawkar also has kept himself and Hari Shankar as surprise factor with the ball. Also, despite failures, he has stuck with Pradeep Airee at top of the order and continues to back his decision that Airee can win Gladiators a match single-handedly on his day.

One can predict the playing XI and batting order for Warriors tomorrow but it can't be said same for Gladiators. They have been mixing it up, surprising their opponents throughout the group stage.

Special Sunil innings
Sunil Dhamala is playing one of the best games of his career. At least, the innings he played today against Lalitpur Patriots say so. Lalitpur has an effective varied bowling attack. From Sandeep Lamichhane’s leg break to Lalit Rajbanshi’s left-arm spin. The international standard was also up to the mark with Dinesh Bhandari’s pace and Sunny Patel’s spin. The pitches have been on the slower side throughout the tournament. More so the one used today where both Chitwan and Bhairahawa struggled to make runs. However, Sunil Dhamala who made most of his runs in front of the wicket played shots all around the ground. He wasn’t hurried for once which can be seen with most Nepali young batsmen throwing their wickets after getting settled in. He took his time, much like Aarif Sheikh the other day, scored his fifty with a style off a six against Sandeep Lamichhane at midwicket boundary. He also scored a straight six against the leg-break bowler which has to be one of the shots of the tournament. He didn’t stop there. He stayed not out surviving 20 overs, which itself is a record in EPL 2017. He further smashed three more sixes and helped Pokhara collect 40 runs in last 4 overs of the innings which most teams in EPL has struggled to do. Dhamala played positive cricket and was rewarded at the end.

Bhari’s brain fade
The match went down to the wire. Lalitpur Patriots required 7 runs in last 4 deliveries of the match. Susan Bhari was the bowler. Batsman pushed it for a single; the ball went straight to a fielder. The non-striker had already committed for the run. The batsman who played the shot gave up in the middle of the pitch, just waiting for the fielder to throw the ball and Bhari to dislodge the bails. But for some reason, Bhari threw the ball to wicketkeeper Binod Bhandari after collecting it. The non-striker had already reached the crease and that allowed the other batsman to reach his. More so, it all got so mixed up that it followed a misfield and an overthrow that resulted in three runs for the Patriots team. The result of the match so much depended in this particular incident that from a potential run out it accumulated three runs for Patriots and equation came down to four required from three deliveries. A load of discussion and stares between skipper Gauchan, bowler Bhari and keeper Bhandari followed but the damage was already done.

Plenty of records were broken in the match between Chitwan Tigers and Biratnagar Warriors. Tigers were at the receiving end... Read More...

US positive about providing support to Nepal to combat coronavirus: US envoy
20 hours ago