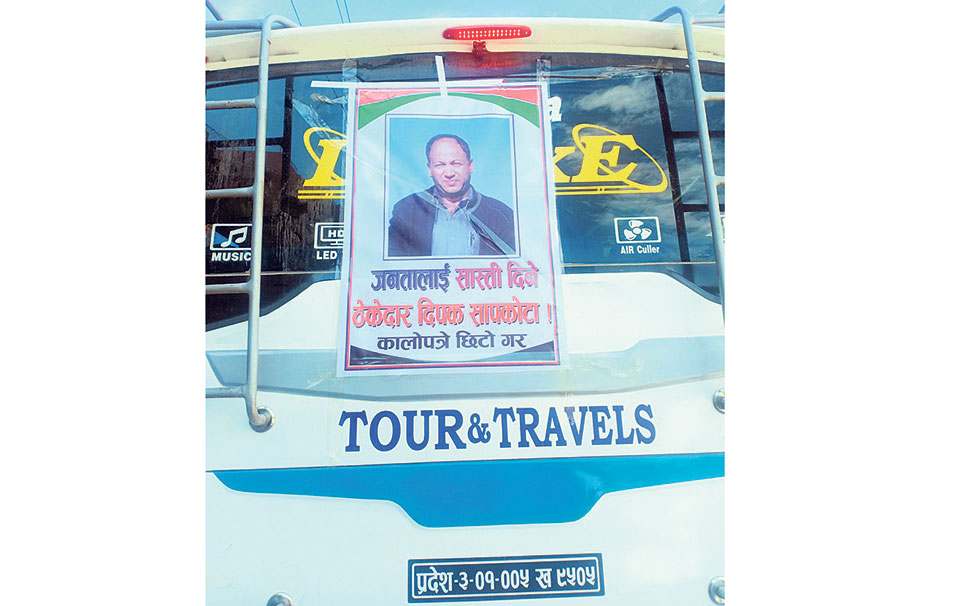 DOLAKHA, Nov 17: After enraged locals pasted posters containing the photos of contractor Sharada Adhikari at public places, locals of Dolakha have also followed the same way of protest on Saturday.

The locals of Dolaka pasted the photos of Deepak Sapkota, managing director of Shankhar Mali Construction Service, on the buses en route to Kathmandu from Dolakha. The company has been delaying the construction works of the road connecting Dolakha with Kathmandu. The company had bagged the contract to upgrade the roadway some five years back.

The posters of Sapkota have also been pasted in Charikot market. According to Pushkar Adhikari, a hotel entrepreneur of Charikot, the locals have been protesting against the construction company, but it hasn't expedited the road upgradation work.

The contract to upgrade the 55-kilometer Lamosanghu-Jiri road section of the Araniko Highway was awarded to two different construction companies at Rs 1.15 billion. The road section is under construction with a loan support from Exim Bank of India.

According to Deep Barahi, chief of the road expansion project, even 50 percent of work has not been completed till date.

On Tuesday, the locals of Nagarkot had also pasted the posters of the contractor at public places along the Kamalbinayak-Nagarkot road including electricity poles, trees and public buses mocking the contractor.

Nagarkot Nandum Tourism Development Committee had taken the lead of the protest. According to the committee, 130 posters were pasted on electric poles and 40 on vehicles. The contract for widening the 16-km road was awarded to Shailung Construction Company six years ago. After the protest, the construction company resumed the work from Friday.

DOLAKHA, Feb 26: Locals of Dolakha protesting against the delay in work on the Charikot-Khadichaur road stretch,   obstructed the movement... Read More...