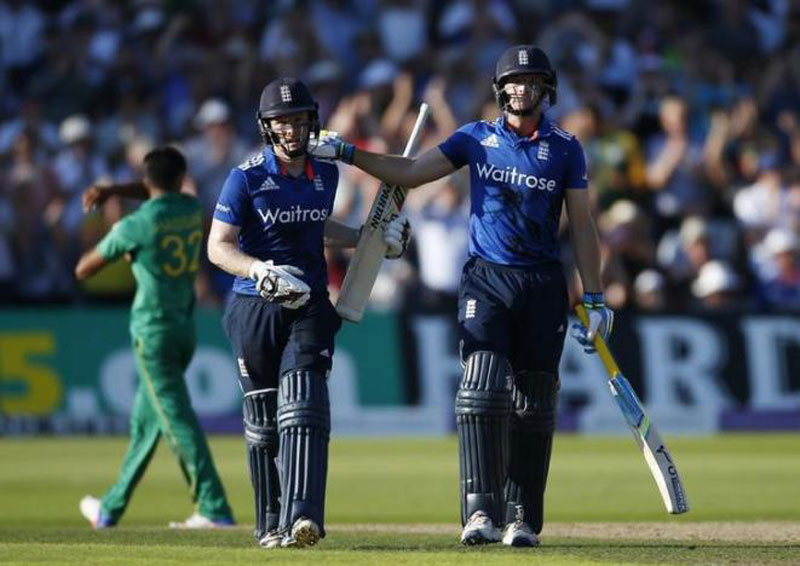 England amassed a world record one-day international total of 444 for three as they crushed Pakistan by 169 runs at Trent Bridge on Tuesday to take an unbeatable 3-0 lead in the five-match series.

Jos Buttler struck the last ball of the innings for four to take Eoin Morgan's men past Sri Lanka's 443 for nine against Netherlands in July 2006.

Hales plundered 171, the highest individual limited-overs score by an England batsman, before Buttler reached his fifty off 22 deliveries, another record for his country.

The hosts passed their previous highest total of 408 for nine, made against New Zealand last year, while captain Morgan got to his half-century off 24 deliveries as he and Buttler shared an unbroken fourth-wicket partnership of 161.

"Quite a monumental knock from Alex Hales," said Morgan. "To score 171 in any form of the game is remarkable and our innings was based around that.

"Records are hugely important, it emphasises we're not just a chasing side. We probably have 17 or 18 players who have played in the last year and a half and could come into this side."

Hales flayed four sixes and 22 fours in his 122-ball knock to surpass Robin Smith's 167 not out against Australia in Birmingham in 1993.

Caught off a no-ball on 72 and dropped on 114, the 27-year-old right-hander passed Smith's score by pulling Hasan Ali to the mid-wicket boundary.

The bowler trapped him lbw with the next delivery to end a second-wicket stand of 248 with Joe Root, who fell soon after for 85, but the pain was far from over for the Pakistan bowlers.

Buttler hammered six sixes and three fours to get to his half-century and finished 90 not out off 51 balls while Morgan ended unbeaten on 57.

Pakistan, in reply, were bowled out for 275 in 42.4 overs with paceman Chris Woakes the chief destroyer, taking four for 41.

Opener Sharjeel Khan hit 58 but wickets fell at regular intervals until Mohammad Amir smashed 58 in 28 balls to share an unlikely last-wicket stand of 76 with Yasir Shah (26 not out).

Amir's half-century was the first by a number 11 in ODIs.

"It was very tough today," said Pakistan skipper Azhar Ali. "I think they were exceptional innings from Hales and Buttler.

"On a wicket like this you really need to support the bowlers and that didn't happen."