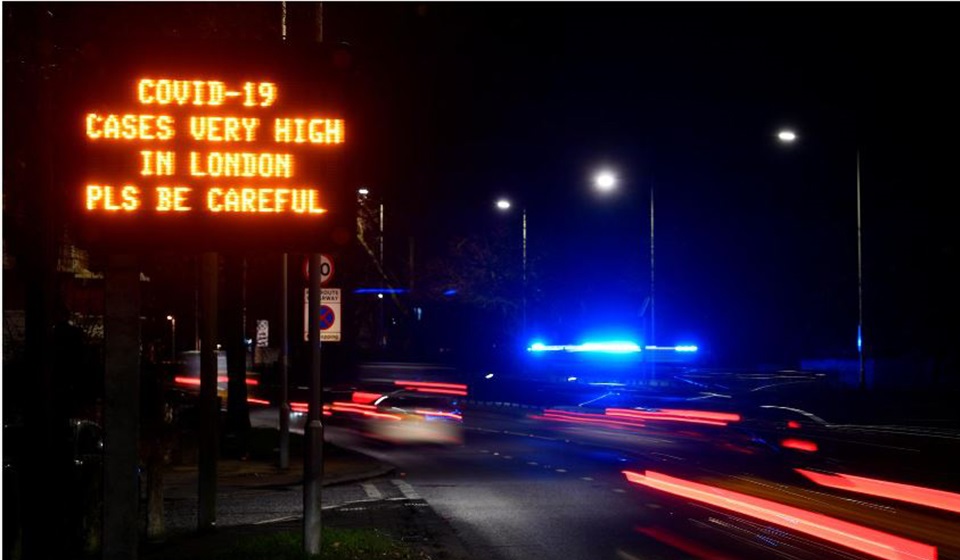 LONDON, Jan 5: British Prime Minister Boris Johnson on Monday ordered England into a new national lockdown to contain a surge in COVID-19 cases that threatens to overwhelm parts of the health system before a vaccine programme reaches a critical mass.

The announcement came just hours after the government hailed Britain’s success in becoming the first country to begin rolling out the vaccine developed by Oxford University and AstraZeneca against COVID-19.

Johnson said a new, more contagious variant of the coronavirus first identified in the United Kingdom and now present in many other countries was spreading at great speed and immediate action was needed to slow it down.

“As I speak to you tonight, our hospitals are under more pressure from COVID than any time since the start of the pandemic,” Johnson said in a televised address to the country.

“With most of the country already under extreme measures, it’s clear that we need to do more together to bring this new variant under control,” he said.

“We must therefore go into a national lockdown, which is tough enough to contain this variant. That means the government is once again instructing you to stay at home.”

Non-essential shops and hospitality would have to remain closed, while primary and secondary schools would close from Tuesday for all pupils except vulnerable children and those whose parents are key workers.

Johnson said the disruption meant it would not be possible for all exams to go ahead this summer -- the second academic year in a row in which the pandemic has played havoc with pupils’ education and future plans.

Johnson said that if the vaccine rollout went as planned and the number of deaths responded to the lockdown measures as expected, it should be possible to start moving out of lockdown by the middle of February.

However, he urged caution about the timetable and appealed to everyone to comply with the rules.

Britain’s economy suffered a historic crash of nearly 20% in the April-June period of 2020 as swathes of business were shuttered by the first lockdown.

The new measures, which allow companies such as construction firms to remain open, could cost about 10% of economic output for as long as they last, said Julian Jessop, a fellow at the Institute of Economic Affairs, a think-tank.

As Britain grapples with the world’s sixth highest death toll and cases hit a new high, the country’s chief medical officers said the spread of COVID-19 risked overwhelming parts of the health system within 21 days.

The surge in cases has been driven by the new variant of COVID-19, officials say, and while they acknowledge that the pandemic is spreading more quickly than expected, they say there is also light at the end of the tunnel - vaccinations.

Johnson’s government earlier touted a scientific “triumph” as Britain became the first country in the world to start inoculating people with shots of the Oxford/AstraZeneca vaccine.

Dialysis patient Brian Pinker, 82, received the first vaccination outside of a trial.

“I am so pleased to be getting the COVID vaccine today and really proud that it is one that was invented in Oxford,” said the retired maintenance manager, just a few hundred metres from where the vaccine was developed.

But even with the vaccines being rolled out, the number of COVID-19 cases and deaths keep rising.

More than 75,000 people in the United Kingdom have died from COVID-19 within 28 days of a positive test since the start of the pandemic. A record 58,784 new cases of the coronavirus were reported on Monday.

Moving a few hours ahead of Johnson, Scottish First Minister Nicola Sturgeon imposed the most stringent lockdown for Scotland since last spring.

The devolved administration in Wales said all schools and colleges there should move to online learning until Jan. 18.

LONDON, March 28: Medical workers in England on the front line of the coronavirus pandemic started to be tested on... Read More...