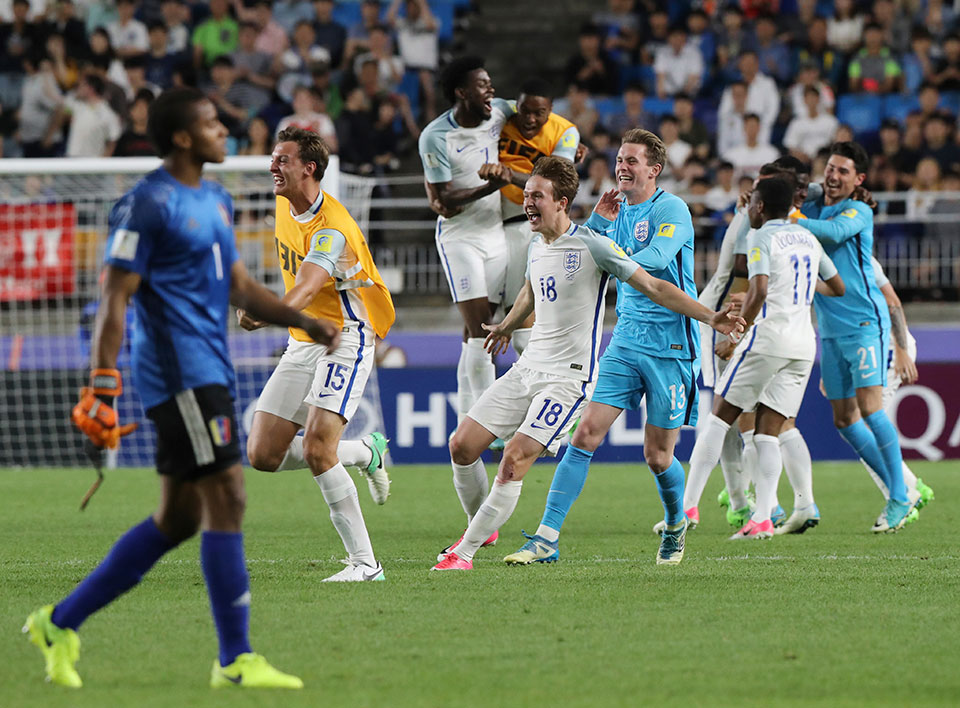 SUWON, South Korea, June 11: A first-half goal from Dominic Calvert-Lewin gave England a 1-0 win over Venezuela in the 2017 Under-20 World Cup final at Suwon World Cup Stadium on Sunday and a first global title since 1966.

The Everton striker made the difference, though goalkeeper Freddie Woodman saved a second-half penalty from Adalberto Penaranda as the South Americans piled on the pressure in an open and entertaining clash in which both teams hit the woodwork.

England made most of the running in the first half though Venezuela looked dangerous in attacking areas.

The European team had the first chance as Dominic Solanke took advantage of a defensive slip to enter the penalty area, but with just the goalkeeper to beat, the Liverpool striker did not make clean contact and shot against Wuilker Farinez's legs.

Ten minutes later, Ademola Lookman forced an acrobatic save from Farinez with a fierce drive from outside the area.

Venezuela came even closer moments later. Ronaldo Lucena's swerving free kick from more than 30 meters (33 yards) out swerved and beat a surprised Woodman, but bounced off the post.

Calvert-Lewin broke the deadlock 10 minutes before the break. The forward beat a defender to a free kick from Lewis Cook, had his first shot saved by Farinez and reacted quickly to put the rebound over the line from close range.

England, which arrived in South Korea without winning a game in this competition since 1997, was composed in possession in the first half but guilty of giving the ball away in the second.

Six minutes into the second half, Venezuela, a country that has never appeared at the senior World Cup, should have drawn level. Sergio Cordova looked certain to score a fifth goal of the tournament with the ball at his feet and just Woodman to beat but the goalkeeper came out quickly to block.

England then almost extended its lead out of nowhere. Josh Onomah's shot from well outside the area hit the crossbar before bouncing onto the goal line and away to safety.

With 17 minutes remaining and Venezuela increasingly pushing forward, referee Bjorn Kuipers from the Netherlands pointed to the spot after Jake Clarke-Salter took down Penaranda in the area despite English protests.

Woodman, of Newcastle United, made a fine save from Penaranda, one of the stars of the tournament, sticking out a hand to palm the ball away though he was diving in the opposite direction.

Venezuela had equalized in the final moments of a semifinal victory over Uruguay but was unable to repeat that feat. It was England celebrating a rare taste of global glory on the final whistle.

Vardy determined to boost England hopes ahead of World Cup