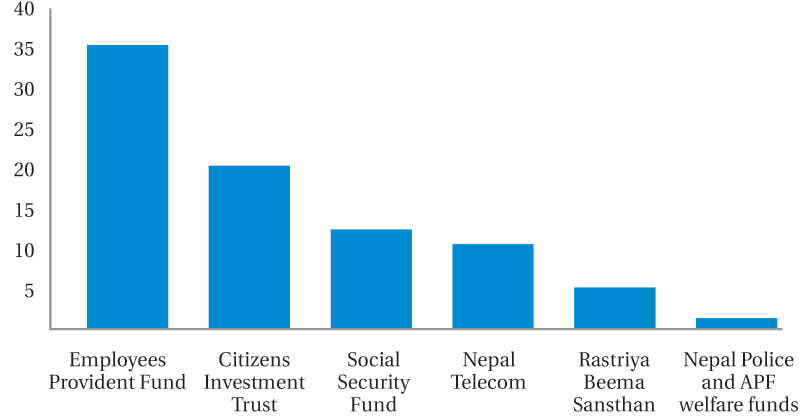 KATHMANDU, Aug 26: When Employees Provident Fund (EPF) agreed to a loan-finance of Rs 800 million to build 22 MW Chilime Hydropower Project two decades ago, it took many by surprised and was seen as a high risk decision.

Following the success of that investment, the story of non-traditional, non-BFI funds putting the money in their trusts to build infrastructure for the country turned another chapter on Friday when their executives expressed confidence and said they have a capacity to inject Rs 83 billion into mega power projects.

EPF and six other institutions separately made commitments to the Minister for Energy Janardan Sharma on Friday to invest in any viable and profitable hydropower project. Their combined commitment is in tune of Rs 83 billion as loan financing.

Sharma had invited them to explore viability of dipping into state-controlled institutions’ funds and using them as lenders. Some of the executives told Republica that said they were encouraged by the minister’s move. They said they were not consulted for the purpose of financing hydropower projects after the financing of 456 MW Upper Tamakoshi Hydropower Project in 2011.

EPF, RBS and CIT had agreed to finance the project worth Rs 14 billion and the project’s construction is about 75 percent complete. Nepal Electricity Authority had guaranteed EPF and the other institutions’ loan finance of Rs 35 billion (initial cost estimates) while private sector banks had declined to begin investing in such projects citing high risk.

Talking to Republica after the meeting on Friday, Minister Sharma said he was encouraged by the commitments and that they had also pledged an additional Rs 50 billion in total every year.

“We will select important projects which are profitable and viable for injecting funds to start projects,” Sharma said.

Nepal Army also has been lobbying to invest a significant amount from its welfare fund which has a cash reserve of Rs 33 billion however there is no legal ground for such investment.

“Banks and Financial Institutions and any other institutions would fear their investment in hydropower would default while we got Chilime financed by EPF,” Nepali said. However, there is a high confidence in the projects, he added.

Four projects with a combined capacity of over 200 MW are being developed by subsidiary companies of Chilime Hydropower Company Ltd and all are financed by ‘domestic resources’, and the general public bought equity shares through initial public offerings.

Nepali, who is also a board member of Budhigandaki Hydroelectric Project Development Committee, estimates that government-owned and private sector bank and financial institutions can altogether comfortably mobilize Rs 100 billion to build power plants while the general people would put up about an equal amount for the purpose.

“However, building a project requires strong leadership and a change in the bureaucratic mentality in project implementation,” Nepali added.