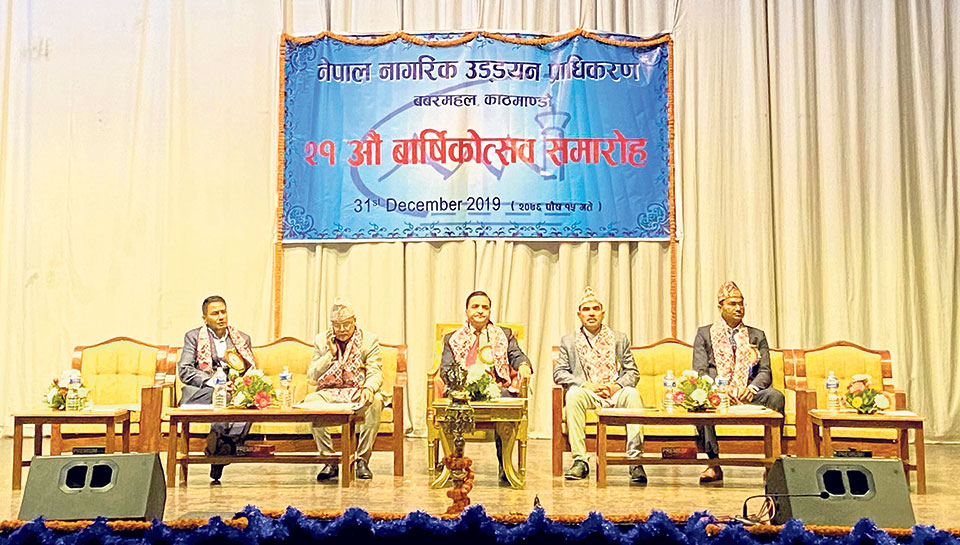 Warn of padlocking CAAN offices if decision not rolled back

KATHMANDU, Jan 1: Leaders of trade unions at the Civil Aviation Authority of Nepal (CAAN) have warned of padlocking the offices of the aviation regulator if the decision to split CAAN to two entities is not rolled back.

The Ministry of Culture, Tourism and Civil Aviation (MoCTCA) has already decided to split CAAN into regulation and operational bodies.

Speaking at the 21st anniversary of the authority organized in Kathmandu on Tuesday, Shrawan Kumar Yadav, chairman of CAAN Trade Union, said that the union has already started second phase of protest against the ministry's decision. "A united CAAN is our goal," he said, adding: "We are against privatization of CAAN. We will stop our protest only after our demands are addressed.”

Yadav also said that CAAN employees will go to any extent to save their organization. "We submitted our memorandum against the decision to the ministry, but we didn't get any response. Later, we issued a press statement, but still there was no response," he said, adding that the ministry invited them for talks only after they registered the statement at the ministry. "We have seen the fate of entities that have been privatized by the government."

Addressing the concern raised by the staffers, Minister for Culture, Tourism and Civil Aviation Yogesh Bhattarai said any organization needs to broaden its scope as per the need of the time. “Some organizations integrate, some will get dissolved in the course of time,” he said, adding: “The restructuring is not bad. CAAN is being restructured to form regulating and operating bodies.”

Stating the government will not take any decision that will impact professional development of its employees, he assured CAAN staffers that they will continue to get perks and benefits that they are enjoying even after the restructuring. "

Similarly, Rajan Pokhrel, director general of CAAN, said the authority was sensitive about the staffers job security and facilities post-restructuring.

Meanwhile, 400 staffers of CAAN signed a petition against the decision to split CAAN in a single day, according to Yadav.

The government is preparing for the split as part of its effort to make the regulatory body more effective as per the international aviation principles. It is hopeful that the split will prompt the European Union to remove Nepal from its air safety list, paving way for the Nepali airlines to fly in the European space.

As Oli government limits its role to counting deaths during the greatest public health crisis, people are dying at an alarming rate
21 hours ago

Complaints filed against ambassadors-designate Khatiwada and Regmi
16 hours ago

Govt refutes curfew and state of emergency rumors
16 hours ago