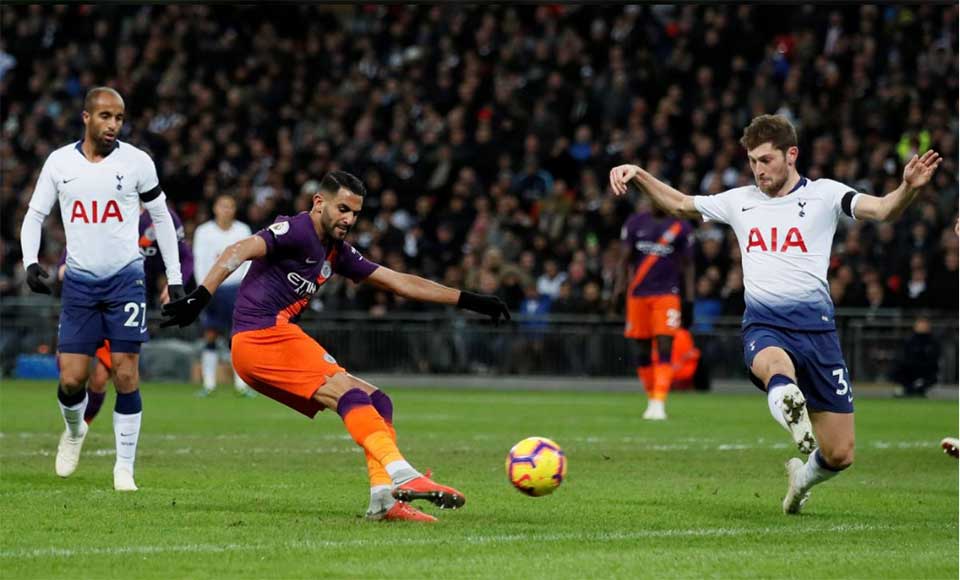 LONDON, Oct 30: Manchester City returned to the Premier League summit on goal difference as they dug out a 1-0 victory over fifth-placed Tottenham Hotspur courtesy of an early goal by Riyad Mahrez at a subdued Wembley Stadium on Monday.

It was not the free-flowing City of late and Tottenham will rue missing some good chances to salvage something from a disjointed affair on a patchwork pitch at a half-empty Wembley.

Mahrez caught Tottenham cold in the sixth minute after a defensive mistake but despite City’s dominance, they were missing their clinical edge on a surface that looked more suitable for American football after an NFL fixture a day earlier.

David Silva and Mahrez both could have put the game beyond Tottenham but the hosts, who were on a four-match winning run in the league and could have gone above City into second with a victory, always posed a threat.

Dele Alli returned from a hamstring injury for Tottenham and his arrival as a substitute sparked some late pressure in which Erik Lamela spurned a glorious chance to equalize.

City held firm for a sixth consecutive Premier League clean sheet to knock Liverpool off top spot. They both have 26 points while Tottenham has 21.

After the tragic events of Saturday, in which Leicester City owner Vichai Srivaddhanaprabha died alongside four other people in a helicopter crash outside the King Power Stadium, it was fitting that Mahrez, a Leicester hero during their 2016 title success, proved the matchwinner.

The game was only six minutes old when City goalkeeper Ederson launched the ball forward and Spurs right-back Kieran Trippier made a mess of his clearing header. That let in Raheem Sterling, who squared for Mahrez to fire home past Hugo Lloris.

The Algerian celebrated in poignant fashion by raising both arms towards the heavens.

“I am very, very sad. That is why when I scored I put my hands in the sky for him,” Mahrez, who was voted PFA Player of the Year after Leicester’s stunning 2016 title, said of Vichai’s death.

“He did a lot for me and Leicester and it is difficult to speak about. It is very sad.”

City coach Pep Guardiola said there was never any chance he would leave Mahrez out.

“Sometimes to play in a big game helps,” he said. “He did really good, he was focused and did a great job.”

purs appeared to lack confidence in the opening stages and City threatened every time they went forward.

Mahrez had another shot turned onto the post by Lloris while Silva fired straight at the French keeper.

City’s defending was sloppy at times though and Tottenham striker Harry Kane whizzed one shot narrowly over and then his touch let him down as he was played through by Lamela after a mistake by Aymeric Laporte.

The halftime interval featured a message for ailing Spurs maestro Glenn Hoddle, who suffered a heart attack on Saturday, and Mauricio Pochettino’s side could have used some of Hoddle’s flair as they toiled way.

City should have buried the hosts in the 55th minute when Bernardo Silva played in namesake David but the Spaniard inexplicably opted not to shoot with the goal gaping, leaving Guardiola angrily kicking the air.

Sterling was also guilty of a miss but Tottenham grew in belief and when Alli rolled the ball across the area for an unmarked Lamela, the Argentine looked set to equalise but lifted his left-foot shot over the crossbar.