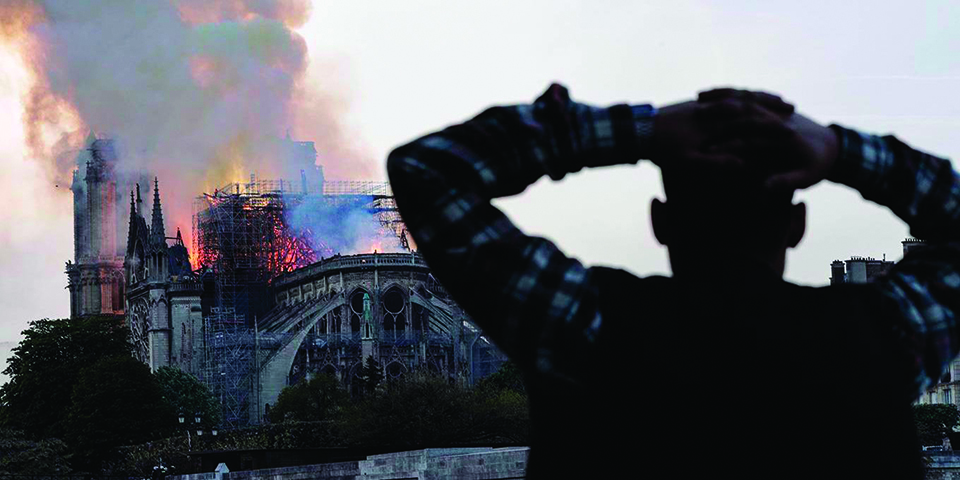 Paris was not burning, but its emotional heart was. What’s more, this gigantic fire was live on prime-time news

PARIS – People were chanting, praying, and crying, or just frozen in total disbelief, as the flames engulfed “their” cathedral of Notre Dame, the object of their individual and collective memory. The emotions of those who witnessed the fire in Paris on April 15 and 16 have been echoed around the world. Let us hope that this global outpouring of empathy in response to a tragedy will have lasting positive effects, in France and beyond.

Not since the two terrorist attacks that bloodied the French capital in 2015 had I received as many messages of sympathy (and interview requests) as I did after the fire broke out. They came from Australia, Japan, the United States, the United Kingdom, the Netherlands, and many other countries.

The fire also prompted an immediate rush of generous financial contributions to help rebuild the cathedral, not only from France, where hundreds of millions of euros were pledged in just one day, but from across the globe. In America in particular, wealthy donors were quick to support the cathedral that had rung its bells in grief for the victims of the September 11, 2001, terrorist attacks.

Some may be slightly shocked by such a moving outburst of positive emotions, as if the fate of an 800-year-old building were more important than the survival of the planet, the lives of millions of refugees, or the plight of the world’s poor. We seem to find it easier to care about preserving the inheritance of the past than about saving the future. We would rather protect historical buildings than human beings.

And yet I understand and share the emotions triggered by the fire, as well as the sense of responsibility for handing this monument intact to future generations. Notre Dame was a familiar fixture for my grandparents, and I want “her” to continue to be so for my grandchildren. If our collective duty as human beings is to repair and improve our surroundings as much as we can in our very short time on this planet, then the fate of the cathedral is a natural priority. I want history to see my generation as the one that did its utmost to rebuild Notre Dame, or perhaps make it even more beautiful, as a universal symbol of peace and beauty.

I am not a Christian. But as a Parisian, a Frenchman, and a European, not to mention a citizen of the world, I was seized by a profound sense of impending loss when the fire began, as experts feared that the entire cathedral could collapse. I had to rush to see the building to keep a memory of it, before it became a field of ruins, a sea of ashes. I felt I owned Notre Dame, as an integral part of my history and even my life.

Countless millions before me could have said the same. Napoleon was crowned emperor in Notre Dame in December 1804. A generation later, the French literary giant Victor Hugo immortalized the cathedral in his novel The Hunchback of Notre Dame, which was later made into successful films and a musical. And in August 1944, Charles De Gaulle attended a mass there to celebrate the liberation of Paris during World War II, when the city was not yet fully pacified.

But why do millions of people all over the world share my emotions? The cathedral’s beauty is certainly part of the reason, as is the spectacular nature of the fire that nearly destroyed it. A friend of mine, whose balcony looks out on Notre Dame on the left bank of the Seine, described to me what she could only call a “fascination with horror.” Paris was not burning, but its emotional heart was. What’s more, this gigantic fire was live on prime-time news. The most visited monument in Europe, according to the French authorities, was about to collapse. It was precisely this element of familiarity that helped to generate the near-universal empathy for the cathedral’s fate.

This reminded me of a debate I had ten years ago with the American philosopher Martha Nussbaum, who described an experiment on mice. Only when a mouse they “knew” was subjected to pain, she said, did the other mice express an interest in its suffering. The rest of the time, they were completely indifferent.

This empathy has turned something that started as a horror movie into a feel-good film, at least for now. French President Emmanuel Macron sensed the widespread emotion and used it masterfully in calling for national unity in the fire’s aftermath. For the last few months, France has experienced demonstrations and outbursts of violence every weekend, and the country has never been so polarized in recent times. But Macron suddenly had a powerful argument at his disposal: such a tragedy calls for transcending petty divisions and embracing generosity and collective responsibility.

The positive emotions that emerge following such an event are usually intense and short-lived, and this time will probably be no different. True, the Notre Dame drama, and Macron’s skillful response to it, has given the French president some much-needed respite ahead of the upcoming European Parliament elections. But as former British Prime Minister Harold Wilson used to say, a week is a long time in politics. And the European elections are still a month away.