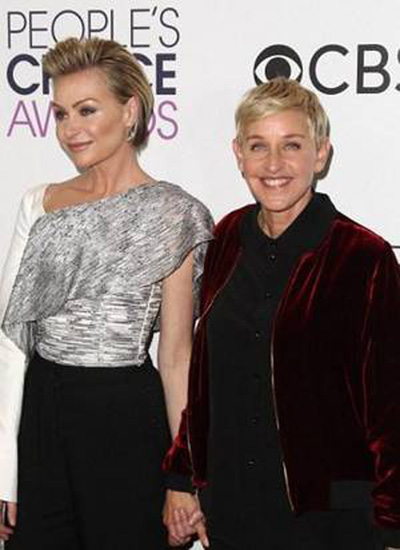 Actress and comedienne Ellen Degeneres made People’s Choice Awards history by becoming the most decorated celebrity in the TV ceremony’s 43 years.

The ‘Finding Dory’ star, who hosts her own top-rated daytime talk show in America, picked up her 20th, 21st and 22nd awards at the Microsoft Theater.

Singer-actor Justin Timberlake presented her with the favorite daytime TV host and favorite animated movie voice trophies, while her sketch romp around a shopping mall with Britney Spears, which aired on her show last year, earned her the favorite comedic collaboration prize.

Handing her another three honors, Timberlake called Ellen “one of my very good friends” and “one of the best people on this planet”.

“And everybody keeps thanking the people and it’s redundant but you are the people who are responsible for me being up there so I say thank you people.”

Timberlake was also a big winner at the awards bash, picking up favorite male artist and favorite song for ‘Can’t Stop The Feeling.’

Blake Shelton was another double winner, making history as the first country act ever to win a People’s Choice favorite album award and landing the favorite male country artist prize.

It was also a huge night for girl group Fifth Harmony, who performed for the first time as a four-piece.

The quartet wowed the audience and viewers at home by wearing revealing black leather outfits for a raunchy rendition of their ‘Work From Home’ hit.

The band, who also picked up the favorite group prize for a second successive year, were stunned by the departure of Camila Cabello last month.

Tyler Perry picked up the award for favorite humanitarian at the event, which was hosted by Joel McHale.

Actor and former Miss World Priyanka Chopra, who won the Favourite Actress in a New TV series award at the... Read More...