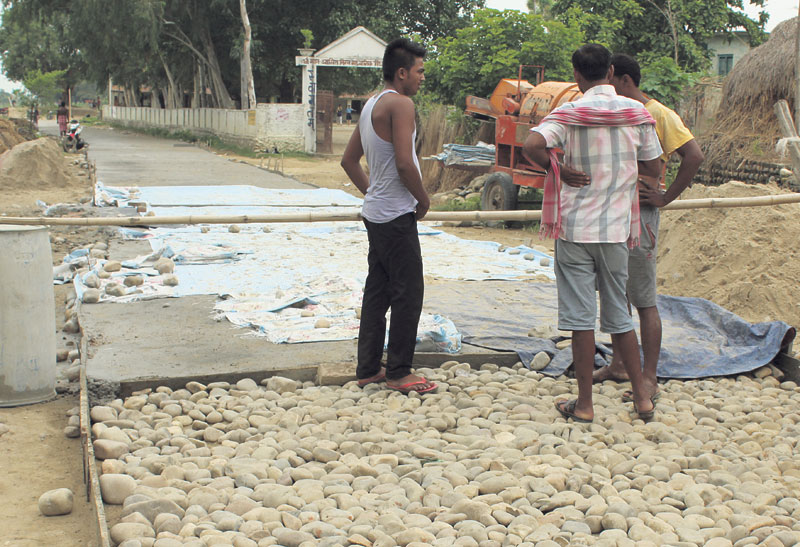 A graveled road being readied for applying concrete plaster, in Sabela municipality, Dhanusha in this recent picture. (Suresh Yadav/Republica)

PANCHTHAR/Janakpur, July 1: The rain has been falling incessantly these days but this has not obstructed work on some development projects. Widening of the Chisapani road is going on in full swing. Excavator has been working through the day on the road, which looks less like a road and more like a ploughed field ready for planting paddy saplings.

The secret behind such incessant work is the need to finish development budget for the road allocated during the last fiscal year.

Rs 2.5 million budget had been allocated for road section in Chisapani, Phidim that joins Mid-hilly highway to Mechi highway in the 2072/73 fiscal budget. However the budget for the program was not released only at the last moment and therefore the upgrade on the road were left in limbo so far. A consumer committee, a body necessitated by the project working procedures to upgrade the road, this Sunday only for starting the upgrades on the road. “The committee was formed in utter rush and the expansion of the road also started in a rush. Authorities had managed excavators and workers also in a great rush, “said a Phidim local.

Commonly called 'Asare bikash' (development project that is implemented in the last days of Nepali month of Asar), projects undertaken during this season are hardly impeccable. This road widening project have just nine days left for completing the project, Dilip Lawati, general secretary of the consumers' committee formed to look after the project informed.

“Four excavators have been working from two sides of the road to complete the task as soon as possible,” he informed.

[Giriraj Baskota/Republica
An excavator at work at the Chisapani - Jorsal road section, Phidim, Panchthar, in this recent picture.]

However, Chisapani is not the only place where Asare bikash is in full swing. Eight different developmental projects are being carried out in Phidim, as part of the New City Project. “We have little time left to do a lot of work. Given the short deadline and massive work we have to complete, rush is inevitable,” Lawati explained.

According to Ramprasad Sapkota, one of the project engineers in Phidim, the problem is the late arrival of the budget as well as delayed directives from concerned authorities for implementing the project. Sapkota informed that Rs 10.2 million was released only recently for the projects adding that the budget released earlier was negligible. “The additional budget released recently is for the upgrading of the road, construction of irrigation canals and among other infrastructures,” he said.

While the lack of budget is shown as the hindrance in developmental works, freezing of development budget has been a great problem. Inability of the concerned authorities and stakeholders to complete assigned tasks on time and freezing allocated budget is a common practice when it comes to development related budgets.

“Given the delayed release of the budget and the extent of work we have to complete within a very short period of time, it wont be a surprise if the budget freezes,” Sapkota said hinting that despite the incessant work they might not complete the project on time.

Millions allocated for road without standard
Similar rush development is seen in Sabela. Rs 3.6 million has been allocated for upgrading of a road section that joins Sabela of eastern Dhanusha to Janakpur. Consumers' committee for upgrading a 600 meter road section was formed just this week and consequently work on the upgrades was launched at breakneck speed.

“Upgrades on the road are being carried out by the committee. Inability to stop vehicles from plying on the road has been a great hindrance in speeding up the project,” Sharma said while admitting that the durability of project would not be very promising. But in his admissions he defended he was not to blame for the delays. “What can I do? Individual cannot be held responsible for all the delays done by concerned authorities.”

Jeet Narayan Yadav, president of the consumers' committee is not happy either. He also very well knows that the budget is not being properly used. “We have been upgrading the road, but at the same time, jeeps, trucks are plying there. This has been affecting the quality of the pitch?” he said even though as the president of the committee he is responsible to ensure that the project is completed with expected quality work. “We cannot stop the vehicles from plying through the road, as there is not alternative route to divert the traffic. So there is nothing we could do to stop them from affecting the new plaster on the road.”

Roshan Yadav, a local social activist, stated that the situation is worrisome. He too shared concerns that that the plaster on the road, for which millions of rupees is being invested will not be durable.

Guru Subedi, section officer at the municipality office while expressing astonishment at the way development projects were implemented, asserted that his office will take stern actions, against wrong doers. “I am surprised to know the way development projects are being implemented. This is absolutely against the prescribed standards. We will monitor and take action against the guilty,” he said.

One of the biggest ironies of Nepal’s budget system has been that while the country somehow manages to allocate budget... Read More...

BIRGUNJ, July 3: The budget allocated by Ministry of Forest and Soil Conservation for the Medicinal Herbs Development Program (MHDP) has... Read More...