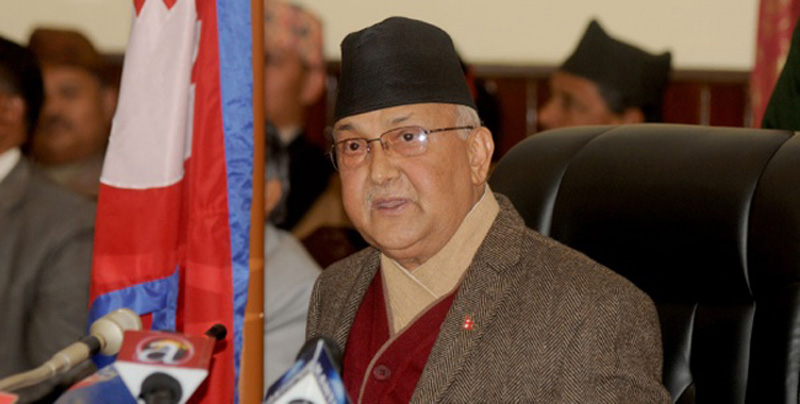 KATHMANDU, Dec 11: Chairman of major opposition CPN-UML, KP Sharma Oli, has expressed wonder why the government was voicing for constitution amendment rather than making preparations for elections.

During a talk program organized by the student wing of the party, ANNFSU, here Sunday, Chairman Oli argued that constitution could not be amended without any reason. It is high time government focused elections, he underscored.

He, however, said constitution could be amended for the elections. "Let's seek the provisions that bar elections on time, and amend it," he urged the government, adding that amendment must not be the cause resulting in crisis in country.

"I can't tolerate the ill attempts that jeopardize country's sovereignty and interference in internal affairs," he emphasized.
According to him, the provision of 33 % reservation for women should be increased to ensure more rights and opportunities for women. Once the participation of women is increased in every state mechanism, they would be empowered for leadership and responsibility, viewed the UML Chairman.

On the occasion, UML central member Sabitri Bhushal said her party has formulated a code of conduct against violence against women. All should unite to eliminate VAW, he urged the participants.

Spokesperson of the National Human Rights Commission, Mohna Ansari, said both men and women should be engaged in the campaign against VAW.

Other speakers suggested the party leaderships that they made the VAW one of their agendas. RSS

Government to take together constitution amendment and elections bills

KATHMANDU, Dec 27: The government has informed the federal alliance which also includes the United Democratic Madhesi Front that it... Read More...

Withdrawal of constitution amendment motion is only way out: Oli

Expansion of financial access a must for economic development in Province-1: NRB study
23 minutes ago

EU, UNFPA announce to continue their collaboration to combat GBV in Nepal as their two-year project concludes
25 minutes ago