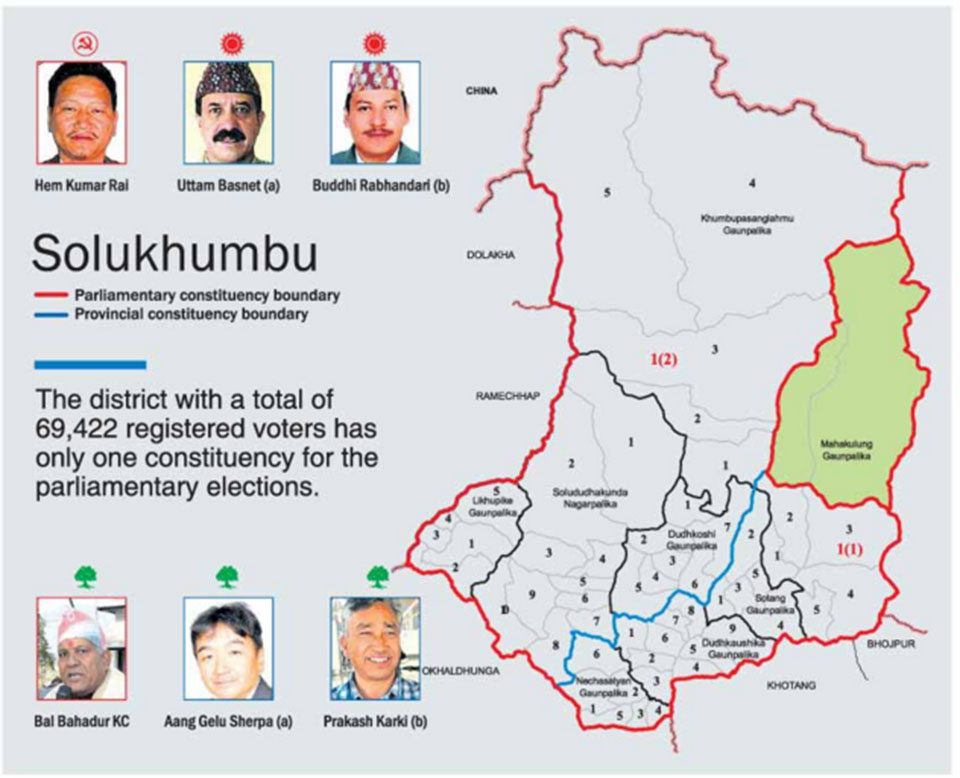 SOLUKHUMBU, Nov 13: With the upcoming parliamentary and provincial elections now less than two weeks away, the ruling Nepali Congress (NC) and the left alliance are in for a fierce competition in Solukhumbu district, home to the world’s highest mountain, Mt Everest (8,848 m).

NC had emerged victorious in the 2013 Constituent Assembly (CA) election in the district. This time, however, the party faces a formidable foe in the form of the left alliance which is strong enough to challenge its realm. The two biggest communist parties of Nepal - CPN (Maoist Center) and CPN-UML - have joined hands to form the left alliance, setting up the stage for highly competitive elections.

The results of the recently concluded local elections show that the communist forces are stronger than the ‘democratic’ forces in the district. In the local elections, the Maoist Center had grabbed three local units, while the UML secured victory in four local units. NC got victory in the remaining one local unit, i.e., Solududhkunda Municipality.

While the two communist parties had together secured a total of 21,699 votes in the district, NC had managed to get just 12,714 votes. If the past result is anything to go by, the communist influence seems strong enough to break NC dominance in the upcoming parliamentary and provincial elections scheduled for November 26.

NC which appeared weak in the local elections has consolidated its strength by resolving the internal rift in its district chapter. NC leaders Bal Bahadur KC and Aang Gelu Sherpa have settled their disagreements and are working together to make the party win the upcoming elections.

On the other hand, the left alliance faces rebel candidates. UML leader in the district, Lochan Kumar Sharma, is contesting the elections from constituency 1 (a) as an independent candidate after being denied a ticket by his party.

UML had snubbed Sharma by giving election ticket to Basnet, who is new in the party. Rebel candidate Sharma is set to give a serious trouble to the left alliance.

The district with a total of 69,422 registered voters has only one constituency for the parliamentary elections.