Eid being observed across the nation 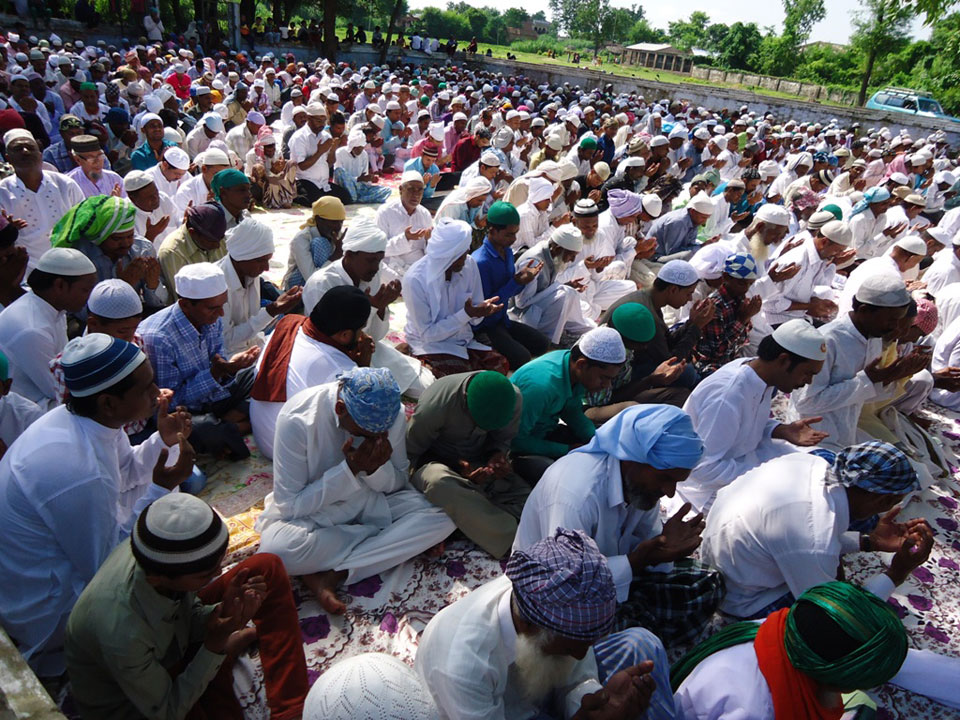 KATHMANDU, June 26:  Muslims across the country are celebrating Edi-ul-Fitr with zest and zeal today. The great festival of the Islamic community is being observed with great gaiety and gusto by reciting special Namaz, offering prayers in mosque, receiving blessings from the elders and giving blessings to juniors.

The festival, which marks the conclusion of a month-long fasting of the Muslims during the month of Ramadan, falls on the first day of the tenth month according to the Arabic calendar.

In Nepal, the festival is being observed today as the new moon-sighting on the last day of the ninth month on Sunday evening.

On this day, Muslims devotes converge mainly in the mosque or any outdoor location in the early morning for Edi prayer and break their fast feasting on delicacies.

Families and friends gather to mark the end of a month-long fast 'Ramadan' and exchange Eid Mubarak (greetings) as well as gifts. A spirit of generosity is encouraged hence they give alms to the poor. The celebration lasts up to three days in general.

The government has declared a public holiday today on this occasion.

President Bidya Devi Bhandari has expressed best wishes to all Nepali Islam brothers and sisters living at home and abroad for their happiness, peace and prosperity on the occasion of Eid-al-Fitr.

In a message today, President Bhandari has expressed her confidence that the special festivals like Eid-al-Fitr observed in our country would promote mutual reconciliation, goodwill and fraternity among different castes and lingual communities.

The President said that this festival has made immense contribution for protection and promotion of our unique cultures and traditions and added that this would consolidate the notion of national unity amid diversity.

Meanwhile, Vice President Nanda Bahadur Pun has extended best wishes to all Nepalis including Islam community in and outside the country on the occasion of Eid al-Fitr.

"The festival may bring happiness, peace, good health and prosperity to the lives of all Nepali people," read the message of well wishes extended by Vice President Pun.

He also expressed hope that this festival may create mutual harmony among communities of all castes, languages and religions, increase fraternity and strengthen national independence, integrity and sovereignty.

He also wished that this festival would inspire all political parties to pursue consensus, cooperation and collaboration.

Also, CPN-UML Chairman KP Sharma Oli extended best wishes to all Nepalis including Muslim community in and outside the country on the occasion of the festival. RSS

The National Muslim Commission (NMC) has extended its best wishes to all Nepali brothers and sisters on the occasion of the main festival of Muslim religious people, Eid-al-Fitr, on Monday.

The festival would help consolidate national unity in the country by consolidating religious and social harmony among entire Nepali people, stated a greetings message sent by NMC today. RSS

Eid being observed across the nation

KATHMANDU, July 7: Muslims across the country are celebrating Edi-ul-Fitr with zest and zeal today. The great festival of the Islamic... Read More...

Akshaya Tritiya being observed across country

Indonesia police chief, others removed over soccer disaster
12 minutes ago