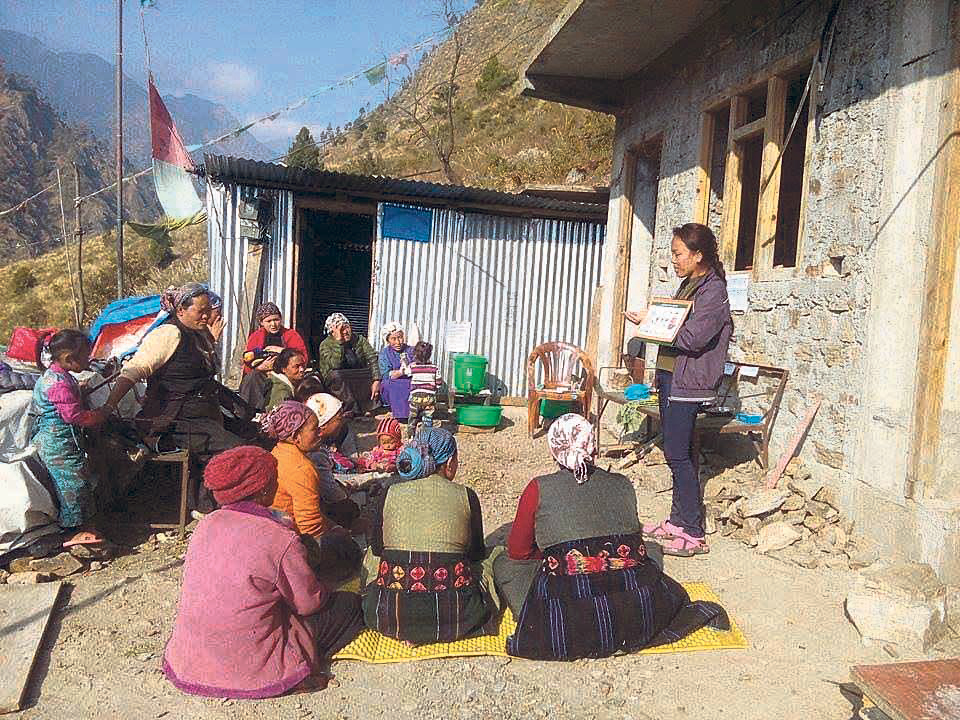 Expecting and nursing mothers take part in an organized mother’s group meeting in Rasuwa in this recent picture. Photo: Republica

RASUWA, Sept 2: Deployment of a professional health worker to educate mothers about childcare has seen tangible results in Rasuwa. Earlier Female Health Volunteers (FHV were responsible for organizing mothers’ group, locally known as ‘Ama Samuha,’ and training them on childcare. But they rarely engaged the mothers.

Mothers have shown active participation in learning and practicing hygiene habits these days after the addition of a health professional to their team.

“The mothers would show little interest in our lectures. But since the addition of the health workers to our team, women look more serious about learning things,” said an FHV from Jyangla village of Kalika Rural Municipality – 5, Anjita Tamang. “When health workers themselves are present during the training, participants get more valuable and accurate health tips. This has impressed upon them, and they are taking these lessons seriously,” she added.

Tamang said that in the past, the FHVs provided guidelines to mothers on childcare, including briefing them on the 1000-day safe motherhood package. However, things have changed of late.

The provincial and local governments have made it mandatory for health workers to visit the villages and assist the FHVs in conducting workshops and providing guidelines to mothers.

“And this has positively impacted the health of mothers and babies. Families have become more careful about nutrition, healthy diet, and hygiene,” she reported.

Parbati KC, the chairperson of Gautam Buddha Swasthya Ama Samuha, agrees to that. She notes that a higher number of women in rural areas are taking an interest in safe motherhood these days.

“Women have become aware of the fragility of health during pregnancy and post-delivery. They have started to take such things seriously,” she said. “We have noticed remarkable progress in the implementation of 1000-day motherhood program though the lack of resources has still marred this project in some areas,” she added.

Under safe motherhood, the government provides counseling for expecting and nursing mothers. Expecting mothers are offered cash incentives if they go for all their health checkups during the pregnancy period and also deliver the baby at a government facility.

The program was affected after the implementation of federal structure across the country. There was a lack of clarity regarding the provincial and local government’s roles. Among others, there was confusion on which of the governments should manage the budget for the program.

With time, things have turned clearer, and service delivery has been smoother.

“Yes, in the immediate aftermath of the implementation of the federal structure, we faced problems in managing the budget of this and other health programs. Such confusions were rampant even in other sectors also. But now, there are little disputes left to be solved,” noted Narayan Poudel, chief of Health Division of Kalika Rural Municipality.

“Since some months, health workers are directly working in the fields. They provide the necessary counseling to women. And this has brought good results,” he added.

According to him, the rising awareness is not just about safe motherhood. Health workers’ tips and teachings benefit mothers on other health issues as well.

“One professional health worker can make a huge difference in rural society. Earlier, even if they would come, they would only stay at health posts and provide their service. Now, they reach out to people’s door with volunteers, making a greater contribution to improving the health of the people,” Poudel remarked.

Meanwhile, Ama Samuha’s chairperson KC informed that the mothers’ groups discuss several health issues during their meeting. “We are not limited to motherhood issues alone. Health professionals provide us knowledge about a wide range of health issues,” she said.

There are a total of 245 FHVs in the district. They have been demanding better stipends for a long time now.

RASUWA, May 4: The number of candidates filing nominations to various positions in the five rural municipalities under the May... Read More...