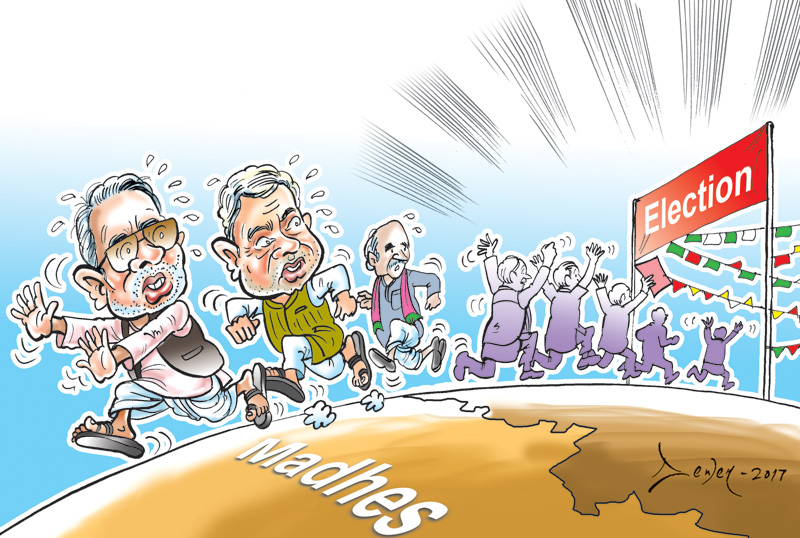 KATHMANDU, July 4: The power tussle raging within the Rastriya Janata Party Nepal (RJPN) has taken a nasty turn with several leaders from western tarai accusing the party leadership of using them and their constituencies as a scapegoat to secure its electoral interests in Province 2 in the east.  RJPN"s presidium constitutes six leaders, all from the central and eastern tarai.

Sources said several second-rung leaders including Hridayash Tripathi, Brijesh Gupta, and Sarbendranath Shukla have expressed serious reservation with the party leadership for failing to take a clear position on polls participation.  Some of them have even threatened to quit the party if they are not given right space.

The party had decided to boycott the second phase of local elections to protest the delay in the constitution amendment. Though party representatives, especially those considered close to Shukla and Gupta, in the districts like Rupendehi and Kapilvastu of Province 5 fielded independent candidacy at the eleventh hour, the party candidates have won elections in just two local units as of Tuesday.

“The party neither succeeded in stopping the polls in Province 5 nor could make best use of them. The party leadership completely ignored western tarai while paying excessive attention to Province 2,” said Tripathi, who stopped leaders from his districts to contest in the local elections.

RJPN leaders privy to the internal feud said the current dispute should not be looked as mere dissatisfaction over the party"s decision regarding poll participation.

At the heart of the current feud, according to them, is long-running power struggle between leaders representing Province 2 and Province 5.

The tussle in RJPN began in April when six parties hastily announced unification without finalizing the leadership issue.  Not a single leader from western tarai is included in the presidium although Madhesi parties had won six out of 11 seats in the second Constituent Assembly elections in 2013 under the first-past-the-post (FPTP) electoral system from the region. The western tarai is also home to some senior faces in Madhesi politics.

“After unification, the situation became such that people like Anil Jha, Rajendra Mahato and Mahendra Yadav became senior to Tripathi and Shukla, who were already established politicians when the former were nowhere in the scene,” said an RJPN leader. He said that both Shukla and Tripathi have demanded dignified space in the party.

Leaders said the ongoing differences, if not addressed now, is likely to push the party to the brink of collapse. But people close to RJPN"s top guns said that the problem is not as serious as it appears.

“It"s natural to have some issues as we were six parties before unification. The differences can be resolved,” said Brishesh Chandra Lal, a leader close to RJPN leader Mahanta Thakur.

KATHMANDU, June 9: Parliament on Thursday amended a provision of the Local Level Election Act through a fast-track process, smoothing the way for... Read More...