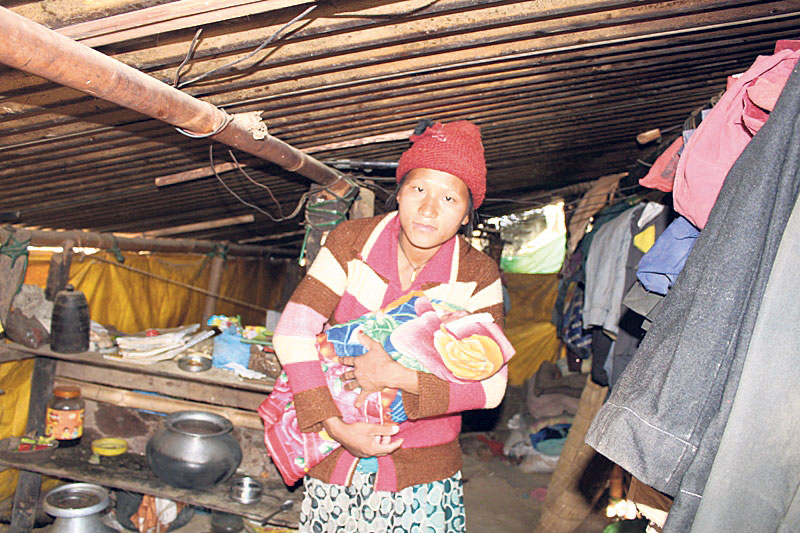 We are in such a pathetic condition that managing two meals a day for the family has become very hard. In such circumstances expecting a nutritious diet is something I don't dare to dream.

PALPA, Jan 10: Even after 20 months earthquake victims in Sahalkot are still languishing in tents and struggling for surviving the cold. Extreme cold is taking its toll in the settlement, claiming lives of three elderly people this winter, Umer Kumar Gaha, coordinator of the district's Earthquake Victim Management Committee, informed. Most of the earthquake victims are now suffering from fever, cough, rheumatism, pneumonia, jaundice, diarrhea and dysentery.

Mina Rana of Sukekot, Palpa is a nursing mother of a newly born child. Though she and her child are supposed to receive better care, they have not been able to get proper food and sleep. With sparse warm clothes, she is struggling to keep herself and the child warm in the tent. “We continue to struggle against odds in the tent. We are doing our best to cope with the miseries that have not left us since the earthquake. What is more upsetting is the miserable condition of my little baby who has already shown symptoms of jaundice,” she said. “Not just nature but even the government has been so cruel towards poor people like us. Last year also we spent the whole winter waiting for the relief but the government failed to fulfill its promise,” she said venting frustration with the sluggish response of the government.

Mina and her family live in the tent where they cook, sleep and even keep their cattle.

“We are in such a pathetic condition that managing two meals a day for the family has become very hard. In such circumstances expecting a nutritious diet is something I don't dare to dream,” she added.

Gobardhan Damai, of the same village, whose three-storey house was destroyed by the massive earthquake, is now suffering from pneumonia. His 19-member family is waiting for the last 20 months to get proper shelter. “The little amount of money that we earn through odd jobs is not sufficient to feed the family. Some days we have to sleep with empty stomach,” said Damai. Cold has badly affected health of some of the family members but they don't have money for the treatment, he informed.

In the whole district, Sukekot is one of the most affected VDC. Government had provided cash relief of 15,000 for making tents and 10,000 for buying warm clothes to the victims.

But some victims are yet to receive this amount. “The government at the time provided food and the financial help of 25,000 to each victim family but after that they have received no further help,” Gaha said adding that he had no idea why the government is taking so long to help the victims.

Victims accuse government and non-governmental organizations of distributing false hopes and fake promises. “Almost all the tents leak during heavy rainfall because of which victims are obliged to take shelter in schools but  how long will this continue?” Gaha questioned.

District Data Collection and Management office (DDCM) has started collecting the data of earthquake victims from December 19. Anirudra Prasad Upadhaya, chief of DDCM said “We have sent 32 teams for collecting social, financial and physical details of earthquake victims and their house. These teams will spend 45 days to collect these details.” The team which includes an engineer will be collecting data from eight houses a day. At the end they will collect data from 11,345 households.

Focal person of the DDCM, Durga Bahadur Thapa, informed that the fresh data is expected to provide accurate assessment of the victims and the damage. “These teams will be collecting records of all the victims including mapping victims with or without earthquake victim cards,” he said adding that discussions were underway to introduce a new process of relief distribution.

GORKHA, Jan 2: Life of earthquake victims in Gorkha has been hit by the increasing cold. On Sunday, several villages in... Read More...

RASUWA, Nov 1: Documents related to the first installment of housing grants for earthquake victims have gone missing from the District... Read More...