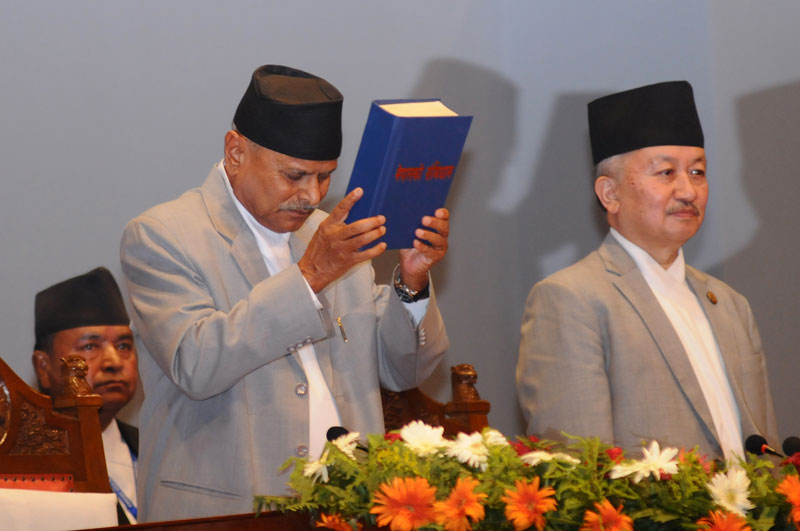 This is a country where more than half the people live under the US $2-a-day international poverty line. Poverty keeps them from seeking adequate medical attention when they fall sick, resulting in many preventable deaths and impairments. Yet this is also a country where the state spends perhaps billions of rupees each year in foreign medical junkets of its VVIPs, mostly top ranking current and former government officials. The latest such recipient of state largesse is former President Ram Baran Yadav, who has just gotten 70 million rupees for first the diagnosis and then the treatment of his prostate cancer. These expenses, in my view, are fully justified.

Surely, we need to have some sympathy for someone, anyone, who comes down with “the emperor of all maladies”. And as our cancer treatment centers are still in their infancy, Yadav also as surely deserves to go the US for his treatment. So what if, during a casual online browsing, you find that half of all men over 50 go on to develop some kind of prostate cancer? The five-year survival rate of men with prostate cancer is 92 percent, a website informs you. If you survive the first five years, the 10- and 15-year survival rates are 93 percent and 77 percent respectively, it says. In other words, most forms of prostate cancer are easily treatable, with radical measures like surgery and radiation advised only in a small number of cases. But why take any chance at all?

The oncologists in Nepal who assured the former head of the state that he need not scour the planet for the ‘best possible care’ and that such care was available right here in Nepal were only puffing themselves up. Who do they think they are? If the former president insists on presidential treatment, the best the hard-earned money of Nepali taxpayers can buy for him, he gets it. End of the story.

Yadav, moreover, is far from the only VVIP who has decided to bless Nepalis with the privilege of treating their exalted ailments abroad. In 2014 former Prime Minister Sushil Koirala spent 20 million rupees—money which would otherwise have lined up the pockets of some conniving bureaucrats—on his cancer treatment in New York. Koirala’s successor, KP Sharma Oli, kindly donated 13 million rupees, on Nepal’s behalf, to the royal Thai hospitals that regularly host him. (His initial offer of his self-healing kidneys for research, post-mortem, was unfathomably rejected.)

But why should they only go when they have something serious?

Prevention, after all, is better than cure, and so the new and welcome trend of our VVIPs touring the world in search of best ‘routine checkup’. Running anew on high-grade imported blood, no wonder oldies like Sher Bahadur Deuba and KP Sharma Oli these days find the energy and the drive to keep going when other people their age would have long since settled for jiggling grandchildren on their laps. These crusaders for democracy in Nepal deserve eternal love and respect of their people for so selflessly dedicating their life to public service, a service that does not end till their last breath.

George Orwell warned us, all those years ago, that all his talking animals were equal but some animals were more equal than others. Law of the nature; can’t change it, you see. So if some folks in our society have been able to elevate themselves from nobodies to royalties, some almost overnight, we needlessly envy them. Shouldn’t we all rather admire these hardy folks and look to follow on their footsteps to surefire success? They are indeed role models to be paraded in front of our kids: Look, this is how you become rich and famous without ever having to worry about how you get there.

They could also give our youngsters a lesson or two on how to successfully stifle shame, that useless emotion that’s well past its evolutionary sell-by date. His Highness Yadav was graced with (only) 60 million rupees by the government following an interview in Nagarik, where he literally begged to be treated at a “good place”. But if anyone should be ashamed it’s us, the common people, who want to drag down a royal personage to our own level, and who expect him to get treatment at our no-good hospitals. How cheap!

Have we forgotten all the horror stories coming out of them of late?

So let us all take this opportunity to wish Yadav the very best of luck as he embarks on his treatment in the US and hope that the wishes of millions of Nepalis who will be praying for his health and happiness come true.

With monarchy now gone, there has been a veritable anarchy in the country. But they were soulless autocrats, weren’t these, those Shahs? Good riddance, I would say. Better to try to perverse the new royalty comprised of certified, if a little ailing, democrats.

KATHMANDU, Sept 10: The two leading umbrella organizations of the private sector are now intensifying their lobbies for the protection of... Read More...