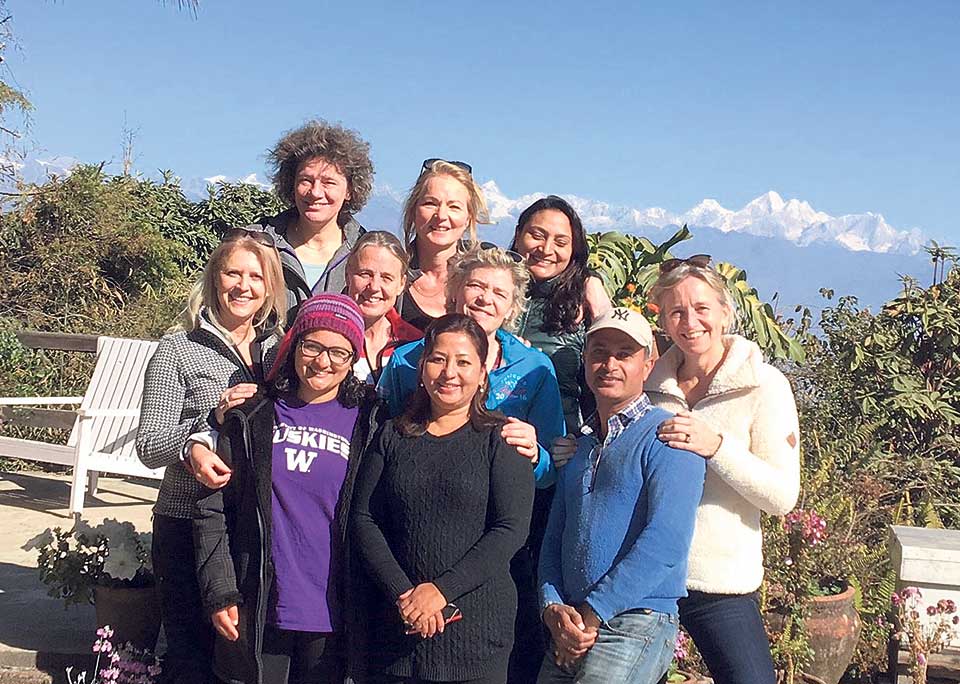 Six powerful women from the Netherlands visited Nepal earlier this month to see if they could contribute to jumpstarting some aspects of Nepali economy. The six women in the team consider themselves to be soul sisters. Their personal stories of survival and triumph are inspiration to many. They sit in the boards of powerful companies and have gone on to do big projects around the world, and they deeply care about the state of affairs in far-flung villages in Nepal.

They have initiated Inspire to Care, a Dutch-based initiative, to support and mitigate disability-related issues in children and are lending hands to expand the program to three provinces across Nepal. These women recently traveled to Ilam, Sunsari and other villages in eastern Nepal at the invitation of Karuna Foundation.

Betteke de Gaay Fortman is the manager of Karuna Netherlands and has been its international director since its inception in 2007. She has been to Nepal multiple times to support local entrepreneurial organization in sustainability and exit, self-reliance and empowerment of the poorest. She also brought along her younger sister Marry on this recent trip.

Marry de Gaay Fortman was texting the president of KLM to have a direct flight from Amsterdam to Kathmandu. She is a lawyer and is a non-executive board member at KLM, the flag carrier airline of the Netherlands. She also leads Women Inc. in the Netherlands which recruits successful and powerful women to help inspire young girls to achieve their aspirations. The organization, Marry says, takes inclusive approach to create connected and independent women who are responsible for their own careers. She sees the need for similar arrangements to help inspire young girls to achieve their dreams.

“Everything you put on the ground grows here,” says Thecla Bodewes, who runs one of the oldest ship making companies in the Netherlands. She observes that Nepal has a lot to learn from the Netherlands in infrastructure and management of projects.

Ilona Haaijer wonders why Nepali companies cannot work to produce fortified food and export that. She is experienced in leading complex, global, multi currency and multi asset businesses and she was recognized as one of 50 senior executives under 45 from the Netherlands as “CEO’s of the Future” by leading Dutch business magazine management team. She did not know much about Nepal beforehand but loved the spirit of the people here and sees the need for further training and exposure where multinationals like hers can play an effective role.

Ilona thinks resilience is a key attribute to make it to the top. She was born to a wealthy family but her parents got divorced and there was no family track record of going to university. She then had to figure it out from an early age. “I’m sure many women in Nepal also have a tough beginning and I hope they have the resilience to stick with it to build a great and meaningful career,” says Ilona.

Ilona sees the need for universities and research and development centers to move closer and start exchanging ideas. She gives an example of Nepali tea as a low hanging fruit that could very easily be harnessed in the international market with right branding and marketing.

“Nepal has to pick two to three products and run with it,” says Carolien Gehrels. She led the international city marketing programs for Amsterdam, Leiden and Maastricht and developed the “I Amsterdam” and was elected vice mayor for the City of Amsterdam in 2006 for the social democrats (PvdA).

She dreams in building twin city relations in order to build sustainable relationships. Carolien runs an engineering company and focuses on city to city learning. She understands the systems of a city and loves working on environment, infrastructure and energy, and has been connecting engineers to cities. “With will and organizational skills, you can improve very fast and make cities vibrant and livable,” Carolien says.

Mélinde Kassens came to Nepal in 2016 to direct and shoot a program on how Nepalis were coping in the aftermath of the 2015 earthquake, and how aid money donated in response to the 2015 earthquake was being used.  She is a reporter and director at the Dutch Broadcast Foundation, leading public service broadcaster in the Netherlands for news, sports and events. She feels a sense of immense possibility here and that people are motivated rather than focused on making money in Nepal. She also says that Nepal needs to tell her story via arts, films and documentaries so that the outside world sees the immense possibility here.

The six women want to connect Nepali products and companies to the global market. They are also willing to help brand some of the products produced here and explore international market for the same. They also felt the energy, drive, and willingness to learn and a restlessness to move forward in the people of Nepal.