Durable cottages being built against refugee and local's wishes 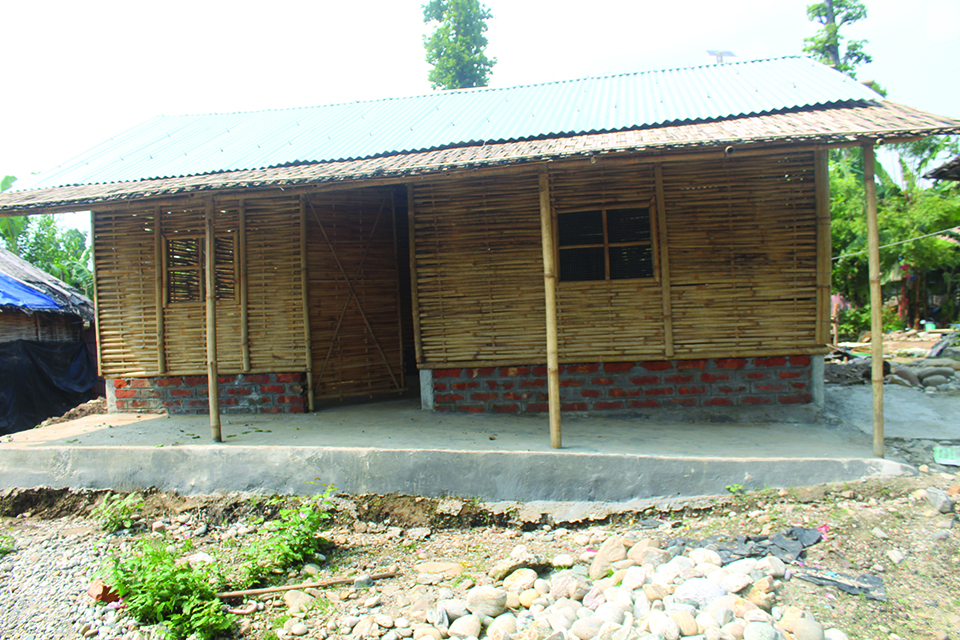 DAMAK, June 10: Bhutanese refugees still languishing in refugee camps in Jhapa and Morang have time and again made it clear that they want to go back home. For pushing this demand, they have taken to streets several times, met political leaders, and have appealed to the international community. After over 100,000 refugees chose to settle down overseas following the third country option availed to them, those who stayed back have become even desperate to get free of the refugee life in Nepal. Around 7,000 of these refugees in the camps, most of who are elderly and are in weak health, are now in dilemma as stronger cottages are being constructed for them.

Donor agencies have started constructing stronger cottages in the name of 'disabled' and 'lonely' people. Even amid protests by locals and community forest consumers and community office, UHCR has been erecting such cottages in forest areas.

"Even after our consistent protest, construction of stronger cottages has not been stopped. We strongly protest against such moves and demand that it be stopped immediately," fumed Nain Singh Bhandari, vice president of Hamse Dumse Community Forest Consumers' Group. "This is not legal, but they are continuing it," he accused.

According to Bhandari, the community forest has been 'occupied' by the refugees for the last 25 years. But now, construction of durable cottages in there has raised eyebrows of the community forest stakeholders. "We are alarmed. This is not something we want or even the refugees want. So, it is better that such move be stopped without any delay," he stated. Currently, refugees are staying in Beldagi of Damak and Pathari of Sanishchare in make-shift huts.

Construction materials like bricks, sand, iron pillars are being piled up in the forest area near the refugee camps and this has alarmed local stakeholders. So far, three dozens of such cottages have been constructed for the refugees.

“They have already constructed three dozen of houses and more are in the making. This is illegal, but they are carrying on with the construction," Bhandari reported.

Lutheran World Federation has been active in the project. With the funding of UNHCR, the federation is carrying out the construction of cottages for the refugees.

Damak Municipality has also shown serious concern regarding the issue. Stating that the construction is illegal, it has urged the donors to stop the project. However, even this has not been paid attention to, said Mayor of Damak municipality, Romnath Oli.

"We are serious about it. They are building one after the other house for refugees. The jungle area is occupied, which is not right," said Oli. "We have urged them to stop the construction, but they have been ignoring it," he added.

Damak Municipality has also shown serious concern regarding the issue. Stating that the construction is illegal, it has urged the donors to stop the project.

Mayor Oli stated that matter is now going to be discussed with the provincial and central government and appropriate action would be taken in coordination with the governments.

On the other hand, refugees have their own grievances; especially those who did not leave Nepal for the third country settlement had harbored hope to get back their home in Bhutan. Despite several attempts to realize the dream, they have not been lucky so far. According to Tikaram Rasaili, secretary of Bhutanese Refugees Camp, Beldagi, donors used to take care of ration for the refugees but recently this facility has come to an end totally.

"Neither are we able to return home, nor are we taken care of by the government here or the donors anymore. In such situation, we are in a miserable condition," he said. "The only thing we want is our repatriation," he added.

Rasaili is not impressed at all by the activities of the donor agencies. They do not seem to be concerned about the refugees, their hardships or their needs but are constructing houses on the basis of their own whim, he said.

As per the existing refugee law, they are not allowed to work as paid labor outside the restricted area. Such provision limits opportunities for them to earn a living. According to a youth refugee leader, Yubaraj Rai, donor agencies are not 'kind' towards the refugees, as they are not ready to listen to their voice. "Neither could we be Nepalis, nor Bhutanese. We are neglected so much that we have no choice than to live a dead life," he stated, adding that the 'left over' refugees have strong desire to get back to Bhutan.

The refugees had come to Nepal in the 90s through India. While 112,000 have settled down in USA, Australia and other countries, 7,000 are still in Nepal and have expressed desire to get back home 'before they die'. Rasaili stated that there is no other solution of the problem than repatriating them to Bhutan. "We want the governments of Nepal, India and Bhutan and the international community to understand the matter and pave way for our repatriation," he stated.

Most govt buildings in Paanchthar built against criteria

PAANCHTHAR, Jan 24: Several government buildings in Panchthar have been found built spending large amount of money against the standards and... Read More...

KHOTANG, Jan 22: Locals of four VDCs in the district have continued their agitation showing dissatisfaction over the report of... Read More...