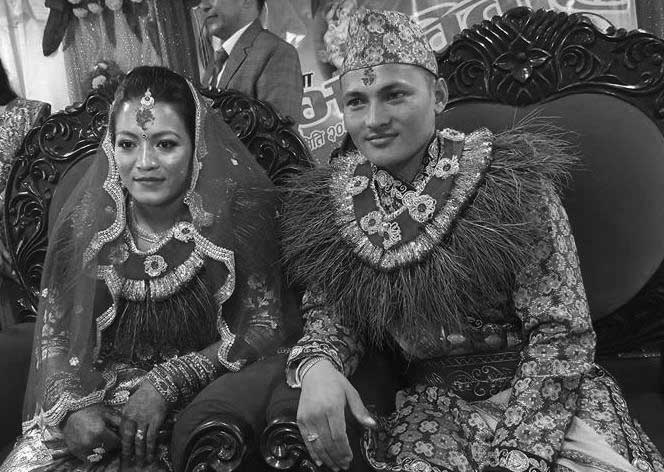 RUKUM Nov 25: Nabin Shrestha and Anita Pradhan were married three days ago. After tying their knots, the couple headed to Rukumkot to receive blessings from their loved ones. As both had to resume their services on November 24, the couple took a jeep to reach the district headquarter Khalanga, three hours away from Nabin’s home on November 23. Nabin and Anita, both inspectors had planned to resume their duties at Surkhet and Rautahat respectively.

The couple became one of the seven people killed in a fateful jeep accident. Families are broken and the two new districts, East and West Rukkum are in shock.

“It is a painful incident, and we had never thought death would come so soon to honest police officers,” Shreeraj Gautam of Rukumkot said.  “They had vowed to live and die together.”

Nabin was a resident of Sisne rural municipality, Rukumkot-6, Rukkum and Anita hailed from Itahari sub metropolitan city-17. The couple had married on November 21. Nabin had joined police services in 2013 and his wife, Anita entered service in 2014.

In his village, Nabin was an idol for its youth—living a simple and honest life with dignity. “He was an idol for the village youths,” Lilamani Gautam a local resident said.

“He always worried about Nepal,” Purnajung Shaha, another resident said. “He was an honest police officer. We have lost a loyal police forever.”

Tears are all that falls from the bereaved family.

Nabin is survived by his parents, an elder sister and a younger brother.

Seven people were killed and three are critically injured after a jeep, Ga. 1 Ja 4260 met in an accident at Kalimati of Musikot municipality-6.  The jeep was travelling from Rukumkot of East Rukkum to Musikot of West Rukkum.

KATHMANDU, March 3: Amid growing concerns over the rapid spread of coronavirus (COVID-19) in different parts of the world and... Read More...

KATHMANDU, April 26: The meeting of the Legislature-Parliament has been deferred on Wednesday after the obstruction of main opposition party CPN-UML. Read More...

Madrasa education to be included in government curriculum
58 minutes ago

The trials of Aung San Suu Kyi, from heroine to villain to convict
2 hours ago