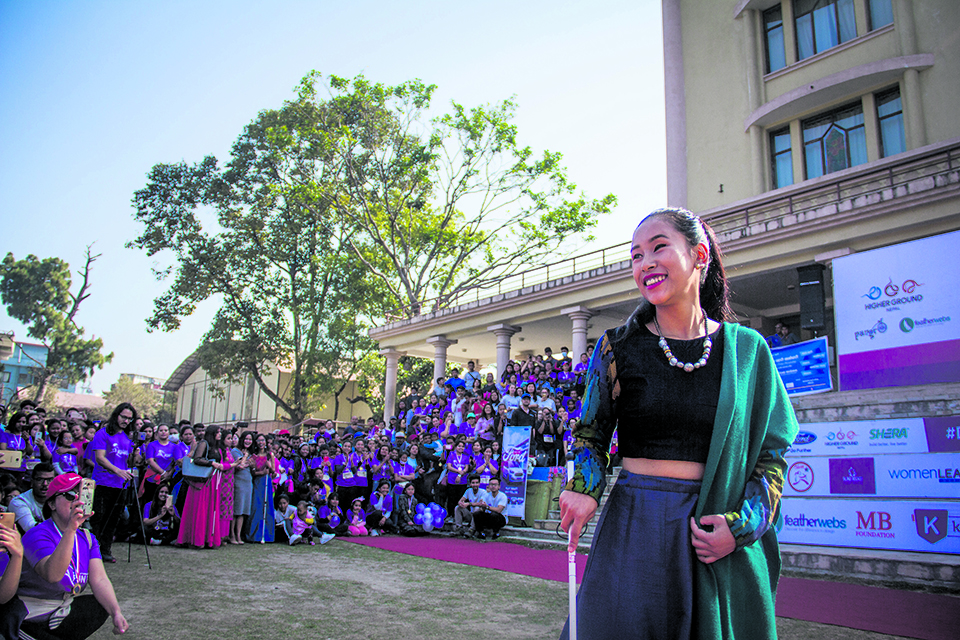 On March 16, 12 models walked the ramp for a fashion show at St. Xaviers’s School in Jawalakhel, Latipur. The event was a part of the Fun Run organized by Higher Ground Nepal in association with Pangro, Featherwebs, Valley Plus, Shera and Ford Nepal. What was special about the fashion show was that all 12 models were visually impaired and walking the ramp was something they never thought they would or could do in their lifetimes.

Abhishek Shahi, who was one of the models, says it was a once in a lifetime opportunity. Walking the ramp was a whole new experience, something none of the models had ever imagined themselves doing. The fashion show was made possible by Blind Rocks, an organization devoted to empowering and uplifting the blind community. Blind Rocks’ founder Shristi KC is forever on the lookout for platforms for people from the blind community to take on challenges and showcase what all they are able to do.

Abhishek lost his sight when he was 16 years old but has always held his love for modeling and acting to heart. He has been with Blind Rocks from its earliest days and admires the organization’s dedication to do something new every time. “They really do think outside the box, taking us out for hikes and extreme sports and organizing these kind of events. They are challenging you but also putting great faith in your ability. This was a really fun experience for me,” he says.

At Blind Rocks, people with visual impairments are given lessons on dance and music, taken for treks and challenged to take up extreme sports. “Just because they can’t see doesn’t mean they don’t have other talents. Blind people too, like anyone else, are fully capable of facing and overcoming challenges,” says Shristi, who herself is visually challenged but that has never stopped her from being a professional dancer and motivational speaker and generally having a positive outlook in life. Her belief in one’s ability to overcome any adversity overrules all notions of limits.

Disability and potential are, contrary to popular belief, mutually exclusive. This notion is at the very core of Blind Rocks where people are never limited by their disability. Nepal’s first fashion show for the blind was an effort to make them challenge and push themselves to do what they never thought they could. Rakshya Khadka reports.

And it is with this belief and Shristi’s unceasing attempts to introduce new platforms for the blind that the first fashion show with blind models was held on the occasion of the Fun Run. Higher Ground Nepal, the main organizer of the event, works for the resuscitation of survivors of trafficking, abuse, and exploitation and has been organizing Fun Run since 2015. Fun Run is essentially a marathon (originally focused on women) and the purpose of the run is to reflect founder Bimala Shrestha Pokharel’s vision of women metaphorically running or walking to their freedom and being empowered.

At the Fun Run, right after the marathon, the 12 blind models from Blind Rocks took center stage and put up a fashion show before a cheering crowd of hundreds of people. Clad in dhaka clothing by Muku designs, the models walked the ramp with their white canes to a choreographed routine. They wore accessories made by women who are victims of abuse and trafficking. Former Miss Nepal, Nikita Chandak, who also works as the Fashion Ambassador for Blind Rocks, was the choreographer for the show.

Sanjiyaa Shrestha, one of the first blind models in Nepal, was among the 12 models to walk the ramp. She says she will keep thinking about the entire experience for a long time. “The fashion show definitely motivated me and I felt as though I could do more. It assured me of my own ability,’ she says. A student of BSW (Bachelors in Social Work), Sanjiyaa hopes to become a social entrepreneur and appreciates all platforms created for people of the blind community. Sanjiyaa is also a title-holder in one of Blind Rocks’ previously organized pageant for the blind. To be presented another opportunity to walk the ramp is something she deeply values.

Throughout the show, the audience cheered and showed great support – a fact all models (nine girls and three boys) took note of. For Sabitri Paudel, the enthusiasm of the crowd was a great morale booster. She particularly appreciates the choreographer’s carefully designed modeling routine. “From leg positions to our gait, she showed us what we could do right. The fashion show was a way for us to show people that we are as capable as anyone. With careful guidance (as with this fashion show and with Nikita) we really can do anything. There are no limitations that cannot be overcome,” says Sabitri.

Shristi was inspired by a show she was the showstopper for in Australia and then later in Nepal in TGIF’s fashion show. She had decided then that she would organize a fashion show for the visually impaired and backed by designer Mukta Shrestha and her team of sponsors, she brought the idea to life. She also appreciates Nikita’s patience and persistence for the choreography. “She held their hands to help them find their footing, to time their steps. They took five days of two-hour sessions for the show and pulled it off without fault,” says Shristi.

Shweta Gubaju, who came for the Fun Run, stayed for the fashion show. She probably speaks for the crowd when she says, “The whole show itself moved me. It was well executed, visually pleasing and very heartfelt.” For Shristi, this was another successful attempt in adding color to the lives of blind people at her organization. This was another platform, another experience, and another dream come true for the models. But it was, she says, a first of many more to come. 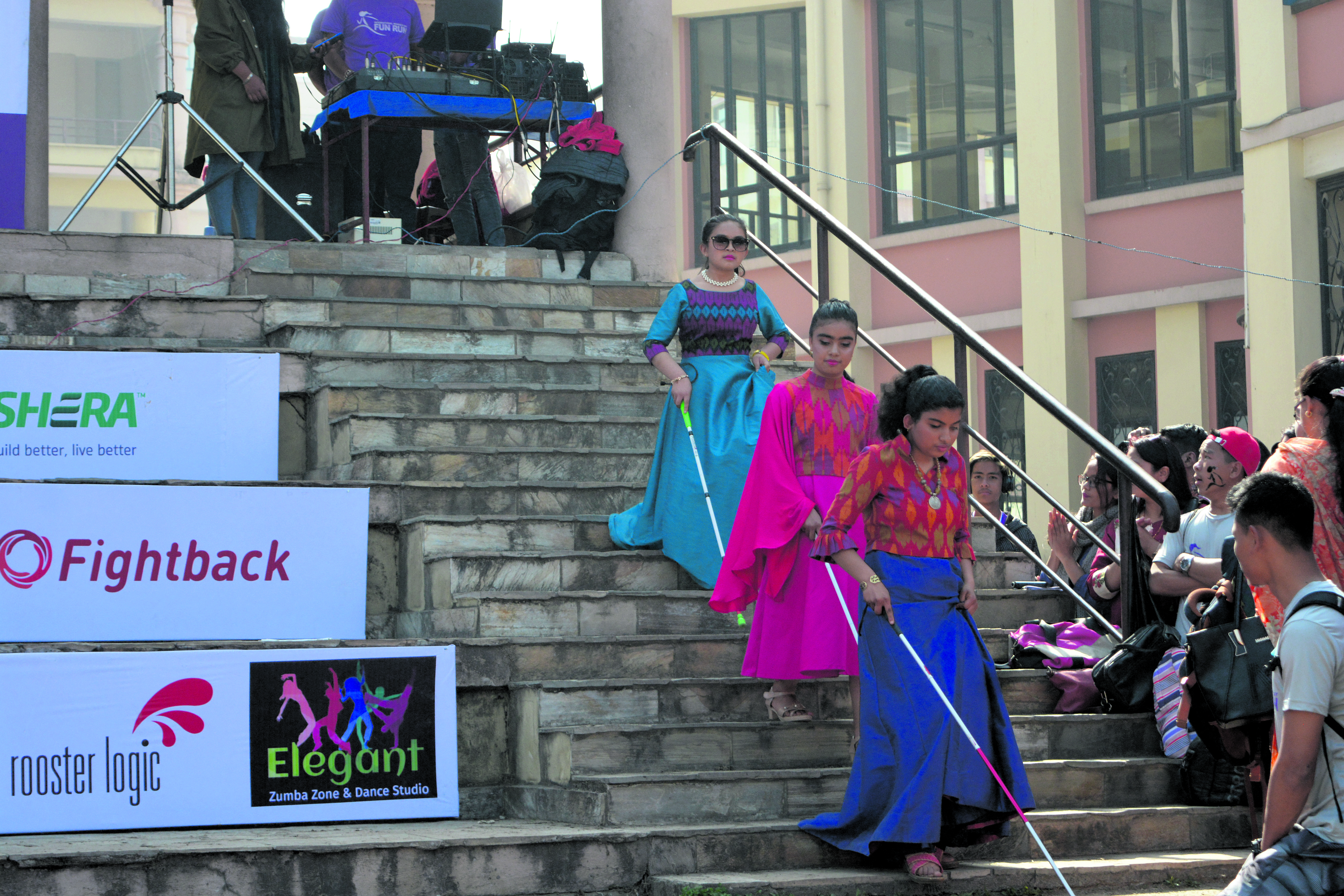 Hyatt is the most preferred hotel in Kathmandu