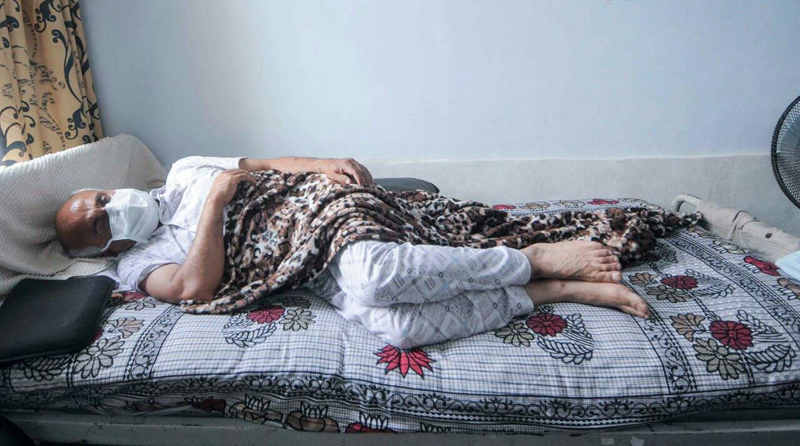 KATHMANDU, Nov 22: The condition of Dr Govinda KC, the senior orthopedic surgeon at Tribhuvan University Teaching Hospital (TUTH), is worsening on the ninth day of his hunger strike against anomalies prevailing in the medical sector.

Dr KC’s health has been deteriorating by the day, according to doctors caring for him. Dr KC began his 10th fast-unto-death from November 13.

Dr Leison Maharjan, president of the National Resident Doctors’ Association (NRDA), said that Dr KC’s condition is gradually deteriorating. “He could hardly speak today. He has been given copious amounts of oxygen and saline water,” he said. “He has been diagnosed with multiple complications, such as chest pain and low white blood cell count, which makes him prone to infections. He is weakening, the heartbeat is unstable and the muscles are cramping.”

Dr KC started his latest hunger strike after the government failed to address his demands, although it had agreed to do so. In the course of starting his 10th hunger strike, he had issued a ten-point demand. The demands include sacking TU Vice-chancellor Dr Tirtha Raj Khaniya, appointing the Institute of Medicine (IOM) dean on the basis of seniority, implementation of previous agreements, not giving affiliation to any new medical colleges before the passage of the medical education bill by Parliament, forwarding the process of impeaching Lokman Singh Karki, chief of the Commission for Investigation of Abuse of Authority, and CIAA Commissioner Raj Narayan Pathak, and implementation of the fee structure proposed by the Mathema Commission.

However, no one in  authority has officially responded to Dr KC’s strike as of Monday.

Newly appointed IOM dean Dr KP Singh announced Sunday that a five-member panel would be formed on Monday for setting the criteria for the appointment of the IOM dean, but this could not be translated into action. Dr Singh passed the buck to Tribhuvan University (TU). “We are in the process of forming it. The committee will be formed soon and is to be coordinated by Dr Ramesh Chandra Adhikari,” said TU Vice Chancellor Prof. Tirtha Raj Khaniya.

Meanwhile, various organizations have been expressing solidarity with Dr KC’s strike and supporting his demands. Kathmandu University Professors Association, Nepal Medical Students Society, Transparency International, Nayashakti Students Union and Youth Forum for Transparency and Good Governance, among others, have urged the government to address his demands.

KATHMANDU, Sept 10: Accusing the government of failing to implement the deal reached with him, senior orthopedic surgeon at Tribhuvan... Read More...