Dr KC may be shifted to ICU while talks fail 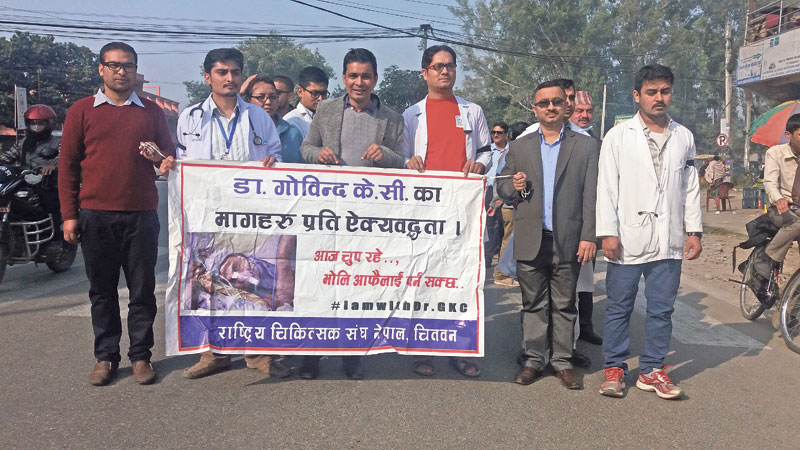 Docs to protests in street and hospitals from Wednesday
KATHMANDU, Nov 29: With Dr Govinda KC likely to be admitted to the ICU any time, the second day of talks  on his demands om Monday failed as neither side showed any flexibility.

The talks held for four hours at Singha Durbar got nowhere as the team representing Dr KC demanded the sacking of the TU vice-chancellor and the IOM dean. Meanwhile, the government's talks team insisted on maintaining the existing setup while also developing new regulations. However, both sides claimed that they were close to agreement on Dr. KC's other demands.

“We will not accept anything short of the sacking of TU VC Dr Tirtha Raj Khaniya and the resignation of IOM Dean KP Singh,” said Dr Jivan Kshetry, coordinator of Dr KC's talks team. “We will take to the streets from Wednesday if the government does not pay attention to us,” he added.

Shanta Bahadur Shrestha, secretary at the Ministry of Education and head of the government talks team, said  the government is committed to reforms in medical education through the development of new rules. “The existing rules do not allow the appointment of the dean only on the basis of seniority as there are other criteria also including capability and academic qualification. So we urged them to reach an agreement for the sake of developing the new rules,” he said.

Talks were held for six hours on Sunday but floundered over the issue of sacking the vice-chancellor of Tribhuvan University and the IOM dean.

The government team is headed by Secretary Shrestha and Dr. KC's team by Dr Kshetry. Dr KC started his latest hunger strike after the government failed to address his demands, although it had earlier agreed to do so. While starting his 10th hunger strike, he had issued a 10-point demand, including the sacking of TU VC Dr Khaniya, the appointment of the Institute of Medicine (IOM) dean on the basis of seniority, and expediting the impeachment of Lokman Singh Karki, suspended chief of the Commission for Investigation of Abuse of Authority (CIAA).

Meanwhile, the condition of Dr KC,who is  a senior orthopedic surgeon at TUTH, is critical on this  the 16th day of his hunger strike. Dr KC began his latest fast-unto-death on November 13 to protest against anarchy in the medical education sector.

“His condition is critical, with an unstable heartbeat, fluctuating oxygen level,  and low levels of blood pressure, calcium and potassium,” said Dr Leison Maharjan, a member of the talks team representing Dr. KC. “He may be shifted anytime to the ICU,” he added.

Dr Maharjan said that they would wait till tomorrow for a positive outcome. “Otherwise, we will be forced to boycott all services from Wednesday,” he warned.

KATHMANDU, July 28: A government team on Thursday held a meeting with Dr Govind KC, who is on a fast-unto-death... Read More...