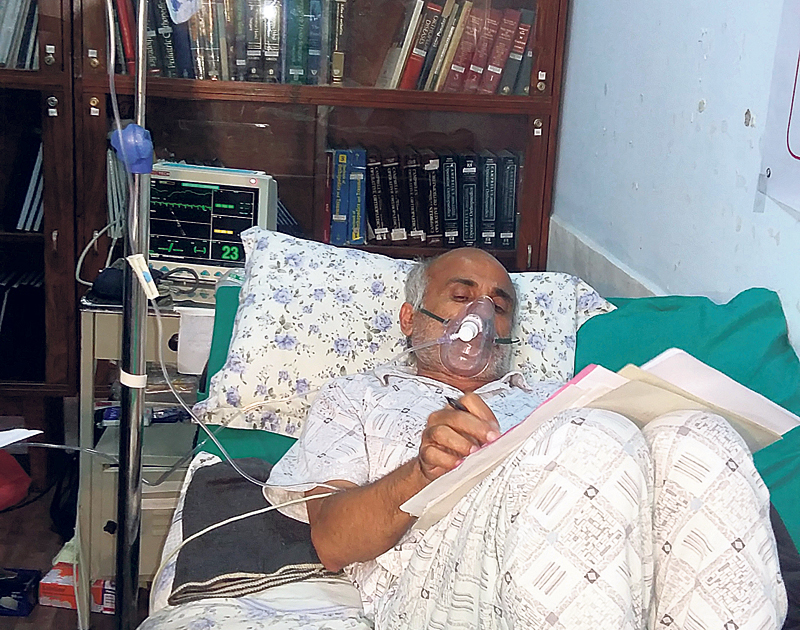 Dr Govinda KC putting his signature on a press statement Friday at the TU Teaching Hospital announcing deferral of his fast-unto-death until after the Dashain festival. Friday was the 12th day of his ninth fast-unto-death. He is a tireless crusador for vital reforms in medical education in Nepal.(Deepak Dahal/Republica)

Dr KC’s team and the government had tried to reach an agreement till late on Friday, but to no avail. Stating that his hunger strike would only dampen the festive mood of the people, Dr KC announced postponement of the fast-unto-death.

He, however, said he would resume the hunger strike once the Dashain festival is over. “I haven’t ended my fight. But I am calling it off because it might dampen the festive mood of the people. I’ll resume my hunger strike at once after Dashain is over,” said Dr KC, addressing a press conference late Friday evening.

One of Dr KC’s demands is appointment of the senior-most faculty member as dean of Tribhuvan University Teaching Hospital (TUTH). As per Dr KC’s demand, Dr Jagdish Agrawal should have been appointed dean.

However, VC Khaniya has been delaying the appointment, pointing out that Agrawal is being investigated by the Commission for Investigation of Abuse of Authority (CIAA). Dr KC has argued that Khaniya failed to uphold his responsibilities and has demanded his termination.

Dr KC, a senior orthopedic surgeon at TUTH, had begun his ninth hunger strike on September 26, demanding implementation of past agreements, passage of the new medical education bill by the ongoing session of parliament, impeachment of Chief Commissioner of CIAA Lokman Singh Karki and CIAA Commissioner Raj Narayan Pathak, and implementation of the medical fee structure proposed by the Mathema Commission.

Despite massive support from the public, the government has not shown  keen interest in addressing  Dr KC’s demands. The government is reportedly planning to end the parliamentary session before addressing his demands. Likewise, there has not been any headway in impeaching the CIAA chief and its commissioner.