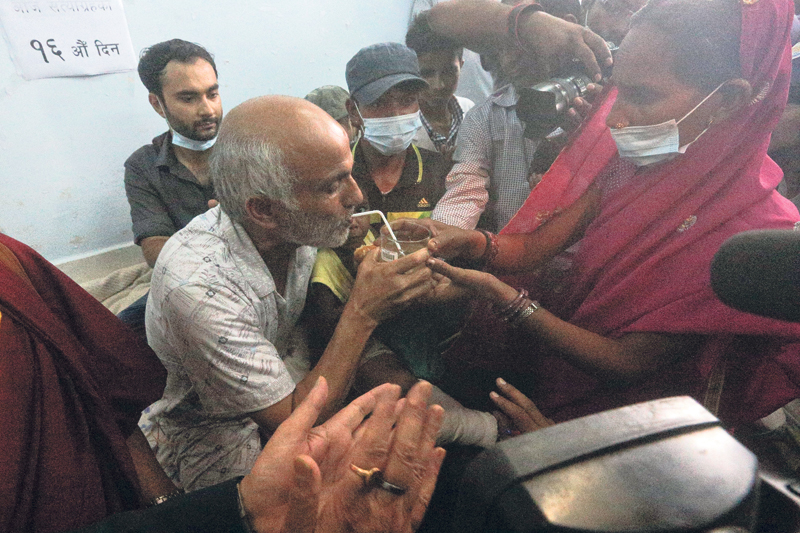 Vows to continue fight against irregularities
KATHMANDU, July 26: Dr Govinda KC, who had been on a fast-unto-death demanding reforms in the medical education sector for the last 16 days, ended his hunger strike Monday afternoon.

Nepali, from Gumba of Sindhupalchowk is Dr KC's patient, has been receiving treatment at TUTH since the last two months. Lama and Yadav are from Gorkha and Siraha districts respectively. Former Chief Secretary Leelamani Paudyal and Senendra Raj Upreti, secretary at the Ministry of Health, had also offered juice to Dr KC.
"I staged hunger strike to ensure quality education and healthcare services for all. Let's see whether the agreements will be implemented or not," he said adding, "Stern protest programs will be launched if the agreements are not implemented," Dr KC said.

Dr KC had launched an indefinite strike from July 10 demanding reform in the medical education sector and impeachment of Lokman Singh Karki, the chief commissioner of the Commission for the Investigation of Abuse of Authority (CIAA). He agreed to end his strike Sunday night after reaching a four-point agreement with the government.

The government has also agreed to include a provision in the Medical Education Bill to make 50 percent seats available free of cost at medical colleges run by the government; establish at least one government medical college in all federal provinces; stop giving affiliation to any medical, dental or nursing college in Kathmandu Valley for the next 10 years; and implement fee ceilings from this year as fixed by the Ministry of Education, the universities and Nepal Medical Council. The government side has also agreed to instruct  Vice Chancellor of the Tribhuvan University (TU) to appoint a dean at the Institute of Medicine (IoM).

Both sides also agreed not to discuss the impeachment of CIAA chief Lokman Singh Karki anymore as the issue has already come to parliament's notice.
Dr KC however, on Monday alleged that chief Commissioner Karki has been promoting corruption and impunity instead of controlling it. Dr KC said he will continue his fight against irregularities and stage, if needed, another hunger strike in future.