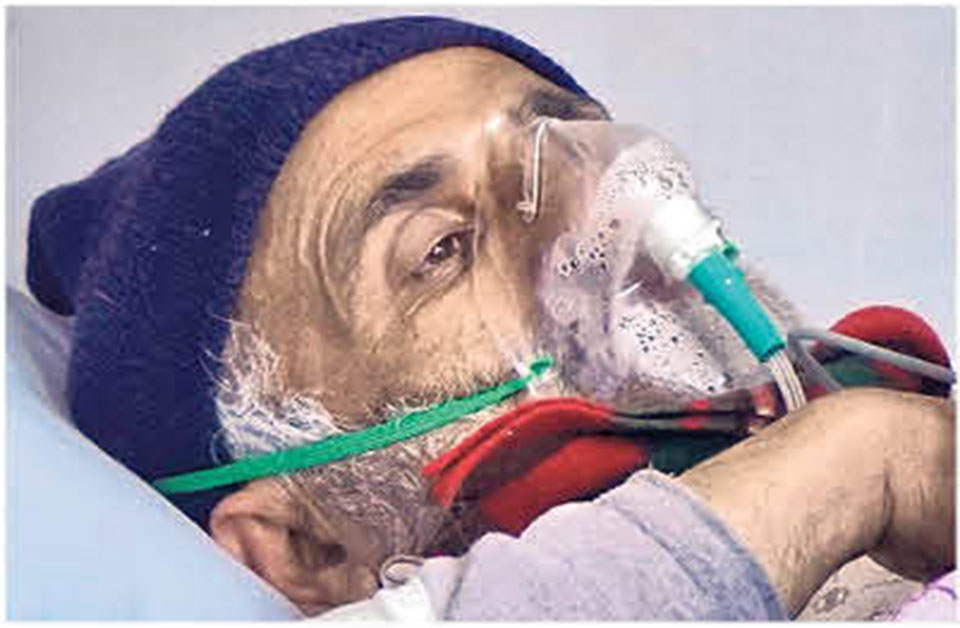 KATHMANDU, Jan 30: Dr Govinda KC’s condition has become critical and needs intensive care treatment, according to doctors attending to him. However, Dr KC, who was on the 21st day of his hunger strike on Tuesday, has refused intensive care, according to the doctors.

Dr KC, who has already staged hunger strike for over 215 days since 2012 demanding crucial reforms in the medical education sector, began his 16th fast from January 9 demanding full implementation of the July 26, 2018 agreement signed between him and the government. His major demands unaddressed by the Medical Education Bill include barring a university from granting permissions to more than five medical colleges and phasing out the medicine-related intermediate programs run by the CTEVT.

Dr KC has been suffering from severe chest pain, sleep disturbance, difficulty in breathing, muscle cramps and generalized weakness, according to the doctors. His heart rate is on lower side with frequent irregular and missed heartbeats though his blood pressure is stable.

Dr KC’s oxygen saturation is low and is being given supplemental oxygen, according to the bulletin issued by  the TU Teaching Hospital.

“His glucose, potassium, calcium, magnesium and phosphorus are on lower side,” said Dr Pramesh Shrestha. “He has denied any electrolyte replacements. His urine acetone is positive. His health condition is gradually deteriorating,” Dr Shrestha said issuing a health update.

“ICU treatment has been advised as he is in need of emergency medical interventions,” Dr Shrestha added. “However, he has refused to get admitted to the ICU.”

However, the doctors continued their relay hunger strike at TUTH and across the country on Tuesday. NMA President Dr Mukti Ram Shrestha said they would not bow to government pressure. “We are ready to take unkind steps in support of Dr KC. If the government does not listen to Dr KC then we will continue our protests and the government will be responsible if anything untoward happens,” he warned. “We can immediately launch a nationwide strike stalling all services at health facilities if the government pushes us to the edge.”

Acharya announces his candidacy for NRNA presidency
13 hours ago