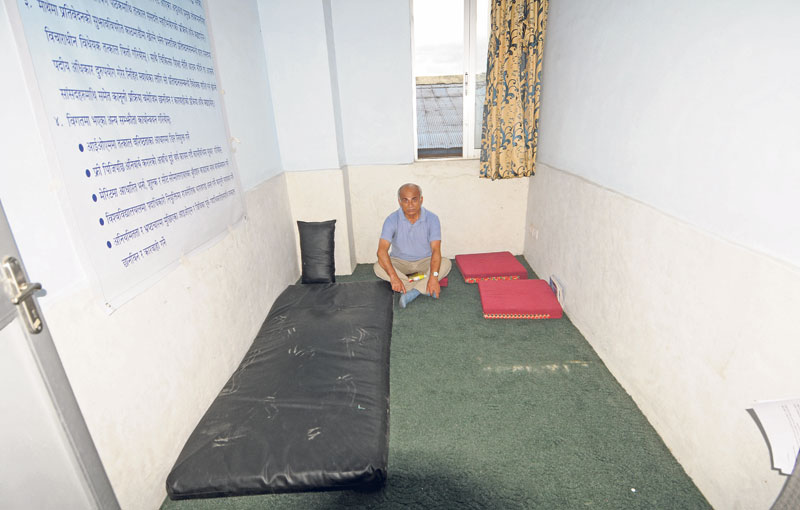 Dr KC, who has already staged fasts-unto-death seven times in the past, has put forth a four-point demand,  including impeachment of Chief Commissioner at the Commission for Investigation of Abuse of Authority (CIAA) Lokman Singh Karki and Commissioner Raj Narayan Pathak.

Earlier, Dr KC had given a 10-day ultimatum to the government to start the impeachment process against Chief Commissioner Karki, who allegedly intervened in Kathmandu University's MBBS entrance exams to fulfill some hidden interests. The ultimatum expired Sunday evening.

At a press meet organized at Tribhuva University Teaching Hospital (TUTH) on Sunday afternoon, Dr KC said that he would continue his hunger strike until his demands are fulfilled.

Dr KC has also demanded that all seats at medical universities run by the government be made free, at least one government medical college be established in all the federal provinces, no affiliation be given to any medical, dental or nursing college in Kathmandu Valley for the next 10 years, and a fee ceiling be implemented from this year as determined by the Ministry of Education, the universities and Nepal Medical Council .

He has also demanded a recall of the bill tabled in Parliament to turn Manmohan Medical College into an academy, and implementation of past agreements. Passage of the bill would circumvent the 10 year moritorium on new medical colleges.

Earlier, Dr KC had turned down  an invitation by Prime Minister KP Sharma Oli for talks. PM Oli had invited him for talks at 2 p.m. on Sunday but Dr KC sent representatives instead. "I don't think the government is serious about my demands," he complained, adding that the PM would not have invited him only at the last hour if he were serious about the demands.

Meanwhile, there was some tension at the Ganesh Man Singh Building at TUTH as a group that is for the hunger strike and another group that is against chanted slogans at each other.  Dozens of policemen were deployed to prevent any untoward incident. Most of the protesters chanting slogans against Dr KC's fresh hunger strike were women.

"I don't have any problem with Dr KC's demands but the hospital is not the place for a hunger strike," said Dr Ram Kumar Adhikari, who is leading the protest against the hunger strike. He claimed that thousands of patients would suffer and the hospital will lose millions in revenue because of Dr KC's fast-unto-death.

Meanwhile, the TUTH administration has padlocked the conference hall and other large rooms in which Dr KC staged hunger strikes in the past.

KATHMANDU, May 4: Civil rights crusader Dr Govinda KC, who is a professor at the Institute of Medicine (IOM) of... Read More...