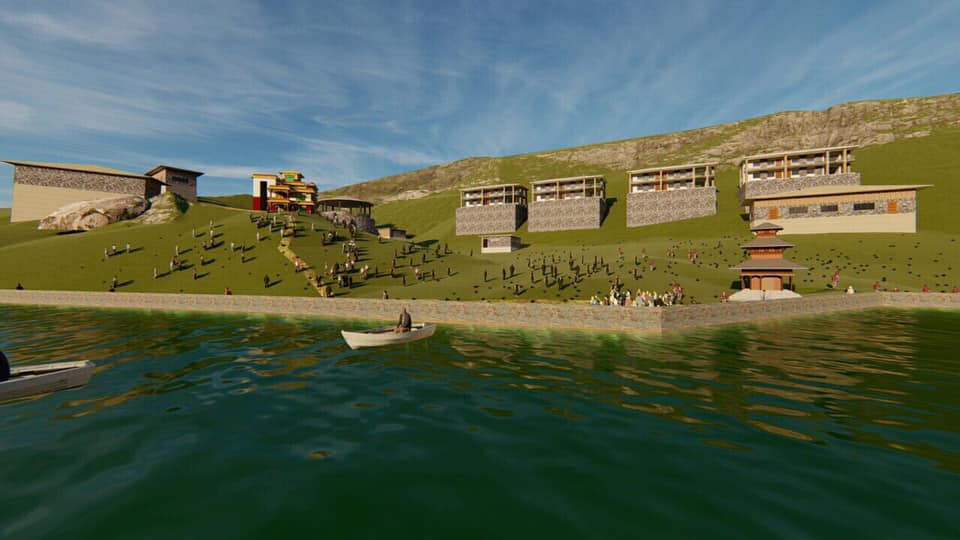 A layout design from the DPR of Gosaikunda Integrated Development Project.

RASUWA, July 29: The Gosaikunda Integrated Development Project for the promotion of Gosaikunda, a popular religious and tourist destination of the country, is set to come into operation.

The provincial government has prepared a detailed project report (DPR) for the project.

The Department of Urban Development under the Ministry of Physical Infrastructure Development prepared the DPR.

According to the DPR, Rs 300 million will be needed for the development of the Gosaikunda area. The project plan includes construction of a 'great wall', railing, roads, resting places, proper management of drinking water and sanitation, and the upkeep of the temple area. The trishul tap, helipad, and hall will be properly managed under the project.

The project plans to construct railings along the road from Buddha temple to Gosaikunda. The 'great wall' will be constructed from Gosaikunda to Cholangpati, as per the DPR.

Provincial Assembly Member Prabhat Lama said that the main objective of the project is to protect the Gosaikunda area and promote tourism here. "The number of tourists will rise in Gosaikunda if the area could be managed properly," he said, "We have started the project accordingly."

A total of Rs 1.8 million has been spent for the preparation of the DPR. For the project implementation, Rs 3 million has been allocated in the current Fiscal Year 2019/20, which will be used for preparing the environment impact assessment (EIA) report and building the railing.

Gosaikunda sees more than 20,000 Nepali and foreign pilgrims annually. Four trekking trails including Dhunche-Gosaikunda, Thadepati-Gosaikunda, Yarsha-Gosaikunda, and Sagarkunda-Gosaikunda are in use.

There are three major routes to reach Gosaikunda. Kathmandu-Dhunche-Gosaikunda is the most used route. From there, one trek along Dhunche-Chandanbaari, Chandanbaari-Lauribina and Lauribina-Gosaikunda.

Another route is Kathmandu-Sundarijal/Helambu-Thadopati, which is also used by pilgrims. Very few travelers use the Yarsha-Gosaikunda route, while tourists do not generally use the Sagarkunda-Gosaikunda route.

KATHMANDU, June 25: The Development and Technology Committee of parliament has directed the government to endorse detailed project report (DPR) of... Read More...