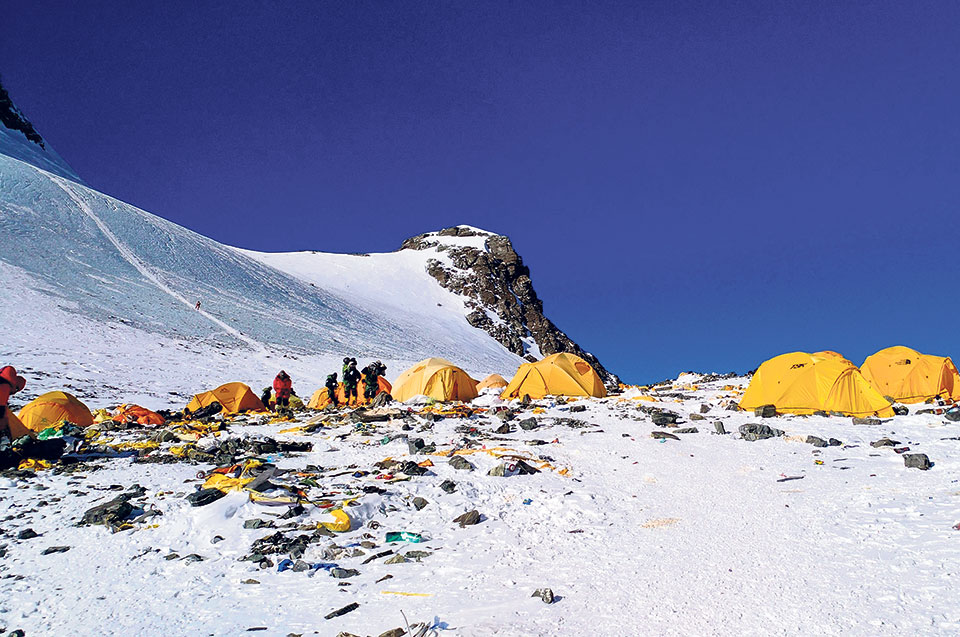 Namche, May 27: Deputy Prime Minister and Minister for Defense Ishwor Pokharel has urged those yearning for longevity and clean environment to join the ‘Sagarmatha Clean-Up Campaign.’

Addressing a program organized at Namche in Solukhumbu district today on the occasion of Sagarmatha Clean-Up Campaign-2019, DPM Pokharel said,” This initiative is an awareness drive for people across the globe who are interested in conservation of mountains and environment.” Lauding the notable role of Nepal Army (NA) in conservation and promotion of natural and historical forts, Chure area, mountains among others natural heritages, Pokharel said that NA had been relentlessly working for the greater good of country and people. Reaffirming government’s full support for the implementation of systematic programs to be brought by the local and provincial government for the development of Everest region and Khumbu area, he called for cooperation for all quarters for development and prosperity of these regions.

More than 20 government and non-government agencies have forged a collaborative partnership for the clean-up drive in Sagarmatha (Everest in English) which aims to retrieve solid wastage and discarded dead bodies from various elevations of this 8,848 meter-tall-mountain. The drive which was led by Nepal Army in association with Ministry of Culture, Tourism, and Civil Aviation, Ministry of Environment and Nepal Mountaineering Association, Sagarmatha Pollution Control Committee among others has been successful in collecting as many as 4,000 kilos of litters (both bio-degradable and non-degradable) from the highest mountains in the world and four dead bodies. The collected wastage has already been ferried to Kathmandu.

Similarly, Chief Minister of Province No 1, Sherdhan Rai underscored the need to interlink the government’s motto of ‘Prosperous Nepal, Happy Nepali’ with Sagarmatha for the implementation of this motto. CM Rai said, “Sagarmatha is our pride and identity.” He pledged to declare the Khumbu area as a touristic place of the province no 1 and to provide Rs 5 million to the Khumbu Pasang Rural Municipality for the same.

Likewise, Nepal Communist Party (NCP) leader and parliamentarian Yogesh Bhattarai commended that the Khumbu area had been contributing to advancing human civilization. Chief of Army Staffs Purna Chandra Thapa said that the NA had joined the clean-up drive, according to the highest priority to the issues surrounding environmental conservation. On the occasion, province assembly members Shurbir Rai and Buddhiraj Bhandari, Pasang Lahmu Rural Municipality Nima Dorjee among others univocally asserted that the conservation of Khumbu area was a cause for concern for the world at large.

All IOM exams for Monday postponed
52 minutes ago

SEE and Grade 12 exams in April and May, respectively
54 minutes ago

Sita Dahal inflicted with COVID-19, kept in ICU
56 minutes ago