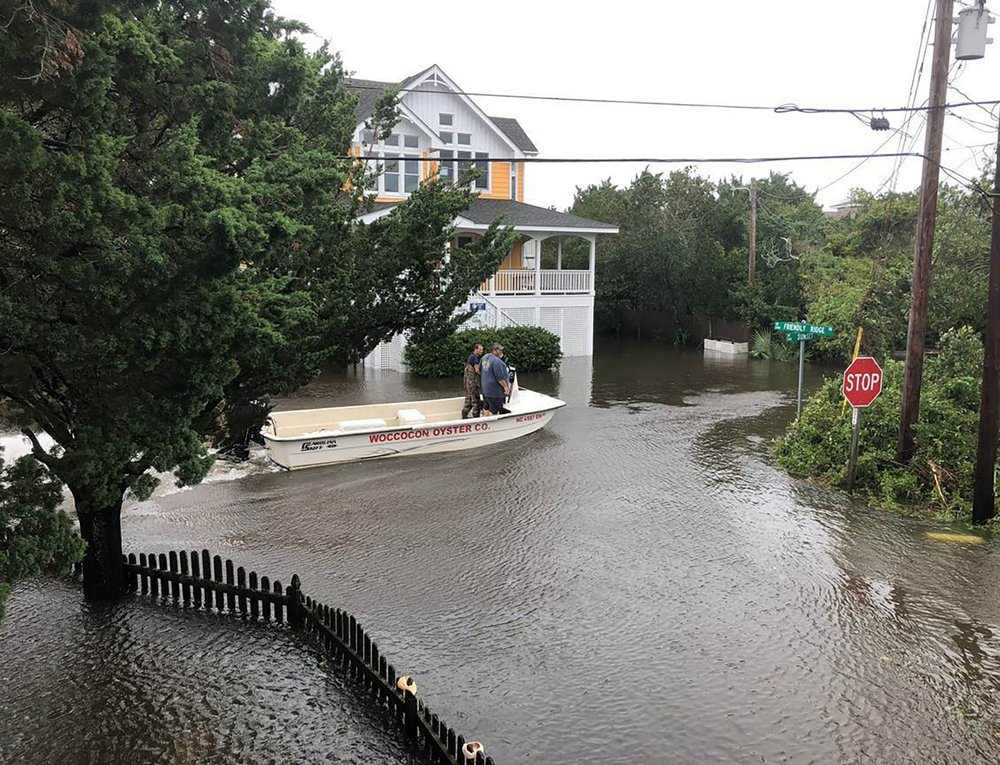 Ocracoke Volunteer Fire Department chief Albert O’Neal, in blue shirt, boats down Sunset Drive on his way to seek out islanders stranded in their flooded homes in the aftermath of Hurricane. Dorian Friday, Sept. 6, 2019 on Ocracoke Island, N.C. (Connie Leinbach/Ocracoke Observer via AP)

ATLANTIC BEACH, Sept 7: A weakened Hurricane Dorian flooded homes on North Carolina’s Outer Banks on Friday with a fury that took even storm-hardened residents by surprise, forcing people to climb into their attics. Hundreds were feared trapped by high water, and neighbors used boats to rescue one another.

Medics and other rescuers rushed to Ocracoke Island — accessible only by boat or air — to reach those who made the mistake of defying mandatory evacuation orders along the 200-mile (320-kilometer) ribbon of low-lying islands.

“We are flooding like crazy,” Ocracoke Island bookshop owner Leslie Lanier texted. “I have been here 32 years and not seen this.”

Its winds down to 90 mph (145 kph), Dorian howled over the Outer Banks as a far weaker storm than the brute that wreaked havoc on the Bahamas at the start of the week. Just when it looked as if its run up the Southeast coast was coming to a relatively quiet end, the Category 1 hurricane sent seawater surging over neighborhoods, flooding the first floors of many homes, even ones on stilts.

“There is significant concern about hundreds of people trapped on Ocracoke Island,” Gov. Roy Cooper said.

Over and over, longtime residents said that they had never seen flooding so bad, and that places in their homes that had never flooded before were inundated.

“We were all on social media laughing about how we’d done well and there was really no flooding at all, just rain, typical rain,” Steve Harris, who has lived on Ocracoke Island for most of the last 19 years. And then, “the wall of water just came rushing through the island.”

“It just started looking like a bathtub, very quickly,” said Harris, who was safe in his third-floor condo. “We went from almost no water to 4 to 6 feet in a matter of minutes.”

The Coast Guard began landing local law enforcement officers on the island via helicopter and airlifting out the sick, the elderly or others in distress, Hyde County authorities said. National Guard helicopters also flew supplies and a rescue team in. Residents were told to get to the highest point in their homes in the meantime.

“Several people were rescued from their upper floors or attics by boat by good Samaritans,” Ocracoke Island restaurant owner Jason Wells said in a text message.

In Buxton on Hatteras Island, close to where Dorian blew ashore, Radio Hatteras volunteer Mary Helen Goodloe-Murphy said that people were calling in to report that “houses are shaking like crazy” and that “it’s never been like this before.”

By evening, the governor said that officials were aware of no serious injuries on the Outer Banks from the storm. One 79-year-old man was airlifted from Ocracoke Island because of a pre-existing condition, authorities said. People in need of temporary housing were being taken to a shelter on the mainland, the governor said.

“The hurricane has left behind destruction where storm surge inundated Ocracoke Island,” Cooper said. “Currently the island has no electricity and many homes and buildings are still underwater.”

Around midmorning, the eye of the storm came ashore at Cape Hatteras, Dorian’s first landfall in the continental U.S. after a week and a half in which it spread fear up and down the coast and kept people guessing as to where it would go.

By late afternoon, Dorian had peeled off the coastline and was finally making its exit out to sea. It is expected to remain a hurricane as it sweeps up the Eastern Seaboard through Saturday, veering far enough offshore that its hurricane-force winds are unlikely to pose any threat to land in the U.S.

Power outages had dropped by about one-third, to around 213,000 in the Carolinas and Virginia.

At least four deaths in the Southeast were blamed on Dorian. All were men in Florida or North Carolina who died in falls or by electrocution while trimming trees, putting up storm shutters or otherwise getting ready for the hurricane.

As Dorian closed in, more than a quarter-million residents and visitors were ordered to evacuate the Outer Banks, which stick out from the Eastern Seaboard like the side-view mirror on a car. But many just tied down their boats, removed objects from their yards that could blow away, and hunkered down.

Dorian slammed the Bahamas at the start of the week with 185 mph (295 kph) winds, killing at least 30 people and obliterating countless homes. From there, it swept past Florida and Georgia, then sideswiped the Carolinas on Thursday, spinning off tornadoes that peeled away roofs and flipped recreational vehicles.

Still, the damage was far less than feared in many parts of the Carolinas, including historic Charleston, South Carolina, which is prone to flooding even from ordinary storms, and Wilmington, North Carolina, the state’s biggest coastal city.

Joseph Pawlick went out Friday morning to rake leaves, twigs and other debris from the sidewalk outside his Wilmington home.

“I slept like a baby last night. This, thankfully, was not bad,” he said.