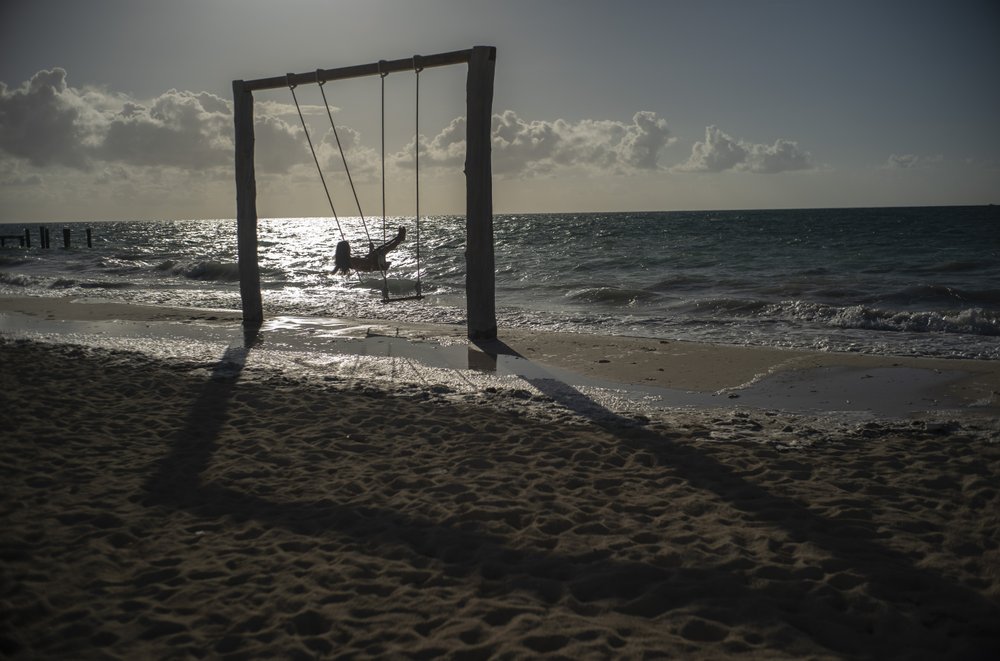 Tourist Loren Fantasia from Baltimore, swings on the beach before the arrival of Hurricane Dorian, in Freeport, Bahamas, Friday, Aug. 30, 2019. Forecasters said the hurricane is expected to keep on strengthening and become a Category 3 later in the day. (AP Photo / Ramon Espinosa)

MIAMI, Aug 31: Hurricane Dorian powered toward Florida with increasing fury Friday, becoming an “extremely dangerous” Category 4 storm but leaving forecasters uncertain whether it would make a direct hit on the state’s east coast or inflict a glancing blow.

The storm’s winds rose to 130 mph (215 kph) and then, hours later, to a howling 140 mph (225 kph) as Dorian gained strength while crossing warm Atlantic waters. The hurricane could wallop the state with even higher winds and torrential rains late Monday or early Tuesday, with millions of people in the crosshairs, along with Walt Disney World and President Donald Trump’s Mar-a-Lago resort.

Though Dorian is growing in intensity, some of the more reliable computer models predicted a late turn northward that would have Dorian hug the coast, the National Hurricane Center said.

The faint hope came on a day in which Dorian seemed to get scarier with each forecast update, growing from a dangerous Category 3 hurricane to an even more menacing Category 4 storm. And there were fears it could prove to be the most powerful hurricane to hit Florida’s east coast in nearly 30 years.

Late Friday, the National Hurricane Center’s projected new track showed Dorian hitting near Fort Pierce, some 70 miles (115 kilometers) north of Mar-a-Lago, then running along the coastline as it moved north. But forecasters cautioned that the storm’s track was still highly uncertain and even a small deviation could put Dorian offshore or well inland.

Trump declared a state of emergency in Florida and authorized the Federal Emergency Management Agency to coordinate disaster-relief efforts. He told reporters that “Mar-a-Lago can handle itself” and is more worried about Florida.

“This is big and is growing, and it still has some time to get worse,” Julio Vasquez said at a Miami fast-food joint next to a gas station that had run out of fuel. “No one knows what can really happen. This is serious.”

As Dorian closed in, it upended people’s Labor Day weekend plans. Major airlines began allowing travelers to change their reservations without a fee. The big cruise lines began rerouting their ships. Disney World and the other resorts in Orlando found themselves in the storm’s projected path.

Jessica Armesto and her 1-year-old daughter, Mila, had planned to have breakfast with Minnie Mouse, Donald Duck and Goofy at Disney World. Instead, Armesto decided to take shelter at her mother’s hurricane-resistant house in Miami with its kitchen full of nonperishable foods.

“It felt like it was better to be safe than sorry, so we canceled our plans,” she said.

Still, with Dorian days away and its track uncertain, Disney and other major resorts held off announcing any closings, and Florida authorities ordered no immediate mass evacuations.

Homeowners and businesses rushed to cover their windows with plywood. Supermarkets ran out of bottled water, and long lines formed at gas stations, with fuel shortages reported in places. The governor said the Florida Highway Patrol would begin escorting fuel trucks to help them get past the lines of waiting motorists and replenish gas stations.

At a Publix supermarket in Cocoa Beach, Ed Ciecirski of the customer service department said the pharmacy was extra busy with people rushing to fill prescriptions. The grocery was rationing bottled water and had run out of dry ice.

As of 11 p.m. EDT, Dorian was centered about 375 miles (605 kilometers) east of the northwestern Bahamas. That was also about 545 miles (880 kilometers) east of West Palm Beach with the storm packing sustained winds of 140 mph (225 kph). It was moving west-northwest at 10 mph (17 kph). Forecasters warned that its slow movement could subject Florida to a prolonged and destructive pummeling from wind, storm surge and heavy rain.

Coastal areas could get 6 to 12 inches (15 to 30 centimeters) of rain, with 18 inches (46 centimeters) in some places, triggering life-threatening flash floods, the hurricane center said. FEMA official Jeff Byard said Dorian is likely to “create a lot of havoc” for roads, power and other infrastructure.

Also imperiled were the Bahamas , where canned food and bottled water were disappearing quickly and the sound of hammering echoed across the islands as people boarded up their homes. Dorian was expected to hit by Sunday with the potential for life-threatening storm surge that could raise water levels 15 feet above normal.

“Do not be foolish and try to brave out this hurricane,” Prime Minister Hubert Minnis said. “The price you may pay for not evacuating is your life.”

In Florida, the governor urged nursing homes to take precautions to prevent tragedies like the one during Hurricane Irma two years ago, when the storm knocked out the air conditioning at a facility in Hollywood and 12 patients died in the sweltering heat. Four employees of the home were charged with manslaughter earlier this week.

DeSantis said the timely message from those arrests is: “It’s your responsibility to make sure you have a plan in place to protect those folks.”

At NASA’s Kennedy Space Center in Cape Canaveral, NASA moved a 380-foot-high mobile launch platform to the safety of the colossal Vehicle Assembly Building, built to withstand 125 mph (200 kph) wind. The launcher is for the mega rocket that NASA is developing to take astronauts to the moon.

The hurricane season typically peaks between mid-August and late October. One of the most powerful storms ever to hit the U.S. was on Labor Day 1935. The unnamed Category 5 hurricane crashed ashore along Florida’s Gulf Coast on Sept. 2. It was blamed for over 400 deaths.

SUNNY ISLES BEACH, May 13: Police are investigating a shooting near one of President Donald Trump’s resorts in Florida that... Read More...

NRB introduces new Rs 1,000 note which can be identified by visually-impaired
14 hours ago