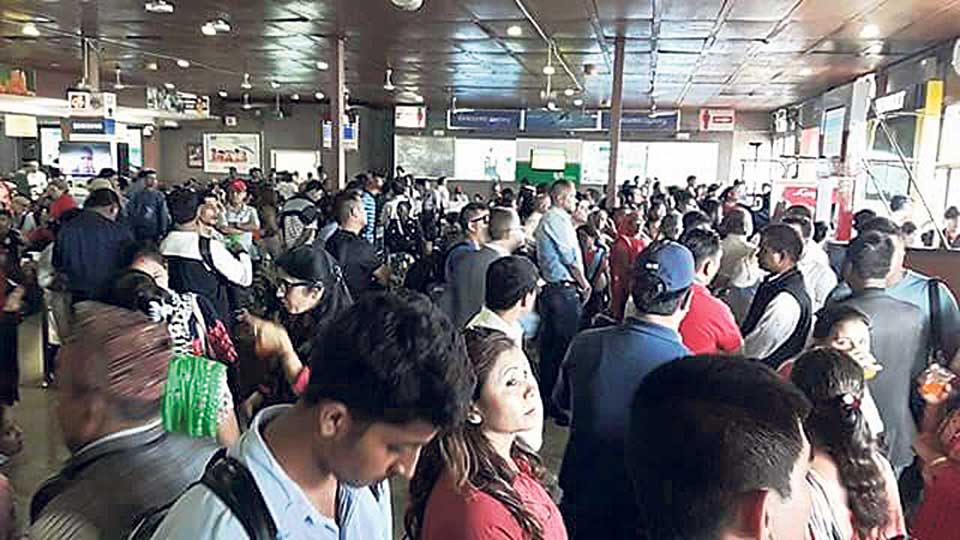 KATHMANDU, Jan 7: While Tribhuvan International Airport (TIA), the only international airport of the country, is being criticized for its terminal capacity and space, passenger movement has been increasing each year.

The recently updated data of Civil Aviation Authority of Nepal (CAAN) shows that passenger movement at both domestic and international terminals have increased significantly this year.

The CAAN data shows that between January and October this year, domestic passenger movement has increased by 41.14 percent compared to the same period of 2016.

According to the CAAN, the total number of domestic passengers has reached 3.2 million in the first 10 months of 2017, while the number stood at 2.3 million in the same period last year.

Both the airlines companies and road authorities have said that the surge in the number of air passengers is mainly due to bad road conditions across the country.

“Major roadways of Nepal are currently in bad shape,” said Laxmi Dutta Bhatta, divisional engineer of Department of Roads (DoR). “In such case, it is normal for people to choose the air route.”

“These days, it is difficult for passengers to travel by road because of under-construction roads,” Bhatta said, adding that people have been choosing the air route also to save time.

Air traffic has increased in the Bhairahawa and Chitwan sectors because of the Narayanghat-Mugling road section that is under-construction for two years.

Speaking with Republica, former director general of DoR Dinkar Sharma said that he preferrs air route to avoid the hassles of travelling by road while going out of valley.

“Nobody wants to go on such burdensome travel,” Sharma said.

He further said people have been choosing the air route also because of their improved economic status.

While the passenger movement has increased in the domestic routes, more private airlines are coming into operation. According to Airlines Operators Association of Nepal, currently eight private airline companies -- Buddha, Yeti, Tara, Summit, Shree, Simrik, Sita, and Saurya -- along with the government-owned Nepal Airlines Corporation are operating domestic flights.

Meanwhile, international passenger movement has also increased by 9.36 percent in the 10-month period of 2017 compared to the same period last year. According to the CAAN data, 3.1 million passengers traveled on international flights from January to October in 2017, while the number was 2.8 million during the same time period in 2016.

KATHMANDU, Dec 29: Domestic carriers flew around 1.18 million passengers in the first nine months of 2016, according to the Civil... Read More...

Over 40 percent of air tickets for Dashain already booked

KATHMANDU, August 24: Passengers have started booking air tickets for Dashain even though the festival is still about a month... Read More...

Can kids be harmed wearing masks to protect against COVID?
3 minutes ago