KATHMANDU, Jan 8: Officials at the Department of Archeology (DoA) have taken strong exception to the United Nations Educational, Scientific and Cultural Organization (UNESCO)’s nod to the illegal construction of a commercial complex inside the UNESCO World Heritage Site Hanuman Dhoka Durbar Square’s protected monument zone and demanded apology from the UN agency. DoA officials said the construction violates the existing building by laws.

Aruna Nakarmi, the chief of Hanuman Dhoka Durbar Museum Development Committee, said that the UN body should apologize for supporting the ongoing construction of the commercial complex which is in clear violation of the Nepal’s Protected Monument Zone bylaws and the Ancient Monument Preservation Act.

“The complex has clearly violated the existing bylaws. Even UNESCO had earlier issued a statement and said so. But all of a sudden, it issued another statement later saying it has no objection to the ongoing construction. This has taken us completely aback,” she said, adding, “The UN body should apologize and correct its recent statement.”

She said the department won’t allow the construction of the complex unless it complies with the existing bylaws related to the Protected Monument Zone.

A statement issued by UNESCO on December 4, 2017 to relevant authorities including the complex owner said, “According to the information received, the construction has been carried out violating the building bylaw set forth in the Nepal’s Protected Monument Zone Bylaws, 2064 (2006). Furthermore, the Ancient Monument Preservation Act 2013 does not allow construction of underground structures near heritage sites.” The UN body had even urged the complex owner to abide by the existing construction laws and avoid any adverse visual impact to the World Heritage property.

“First, the complex is outside the World Heritage property. Secondly, according to the plans, the construction will fully respect the allowable height limit and have a neoclassical style façade, matching with the surroundings, in particular with the Gaddi Baithak. The digging of the underground was done in an area, which already mostly had an underground floor, with some additional parts necessary for the structural stability of the building. For these reasons, we don’t see at this stage of construction no [any] negative impact on the Outstanding Universal Values of the Kathmandu Valley World Heritage property,” the second statement read.

The statement came at a time when a joint team of Kathmandu Metropolitan City and Kathmandu Valley Development Authority had already said constructing the complex has violated the building bylaws by constructing basement, which is not allowed in the heritage area.

“The complex has already violated the standards set by the government. The construction of the basement is illegal. I really have no idea on what ground an international body like UNESCO issued a statement endorsing the construction. We won’t allow construction of the complex unless it meets prescribed standards,” Director General of the Department of Archeology Bhesh Narayan Dahal told Republica.

On Saturday, locals had even staged protest seeking apology from the UNESCO for its controversial statement over the construction of the complex. They had even burnt an effigy of UNESCO Nepal Representative Christian Manhart.

“We smell a rat in the UNESCO’s changed stance. In the past when the government bodies violated the rules related to heritage sites, UNESCO played crucial role to pressure the government to act responsibly. But now how can we rely on the UN body when it supports constructions that are likely to affect the World heritage site,” said Ganapati Lal Shrestha, a heritage site preservation activist, who led Saturday’s protest against UNESCO.

According to DoA officials, the DoA will issue its official statement on Monday over the UNESCO’s recent move. “Today [Sunday], we discussed the issue internally. Since our World Heritage Site in-charge is on leave, we could not issue a statement. But we will make our official position public on Monday,” Devendra Basnet, a DoA official said. 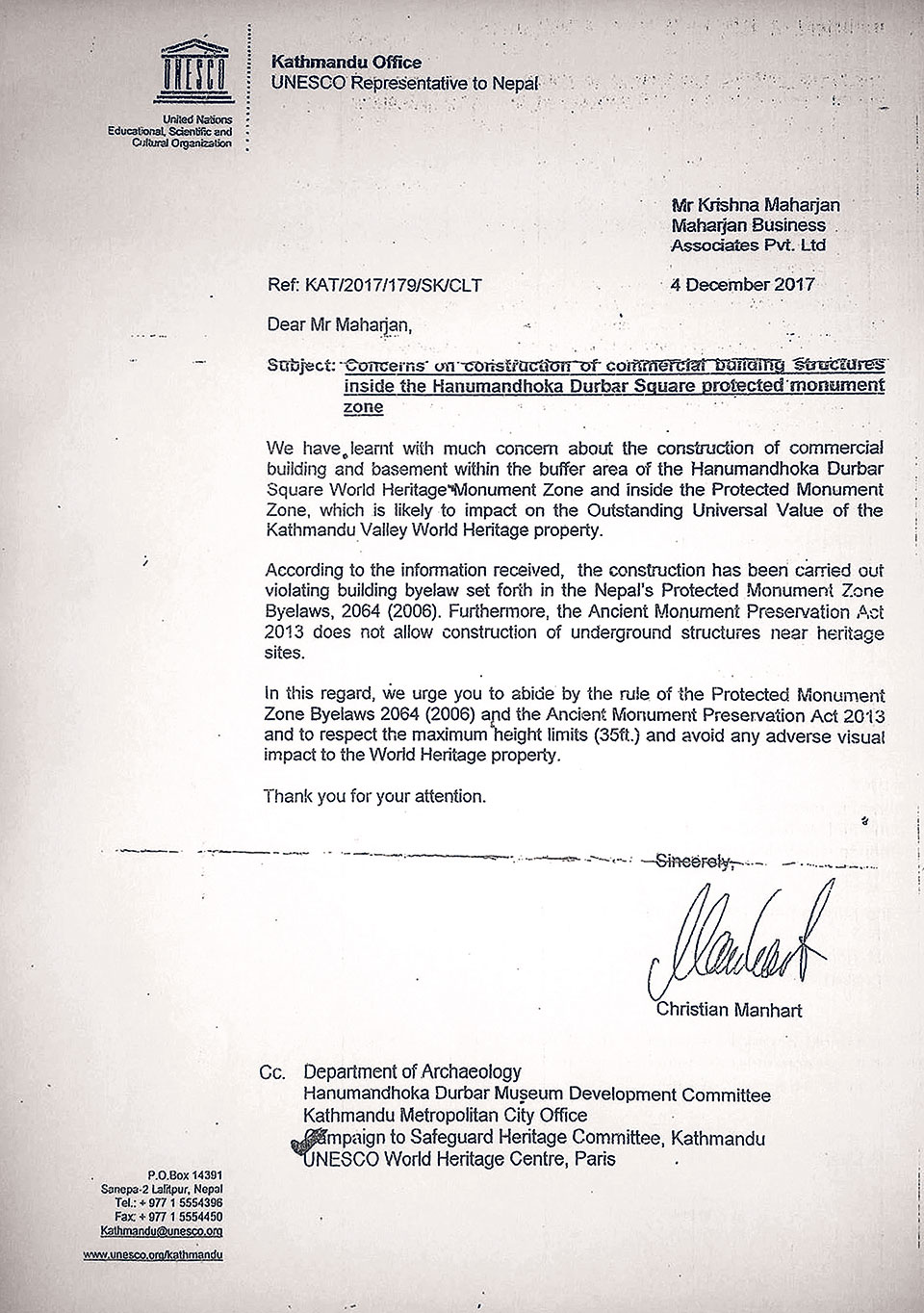 The US border officials are checking the Facebook profiles of immigrants before allowing them into the country, a media report said. ... Read More...