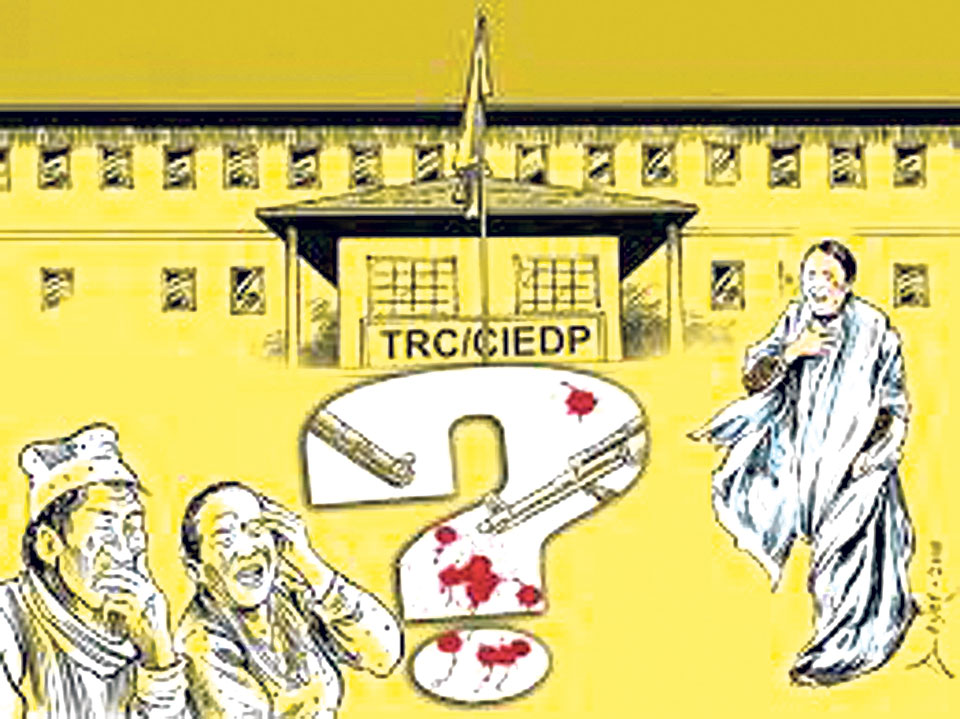 With changed political landscape the issue of transitional justice is gaining momentum again. The government’s acknowledgment of an ongoing amendment of Enforced Disappearances Enquiry, Truth and Reconciliation Commission Act (2014) has re-invigorated the discussion on the matter. However, the amendment of TRC Act in line with the 2015 Supreme Court ruling and Nepal’s obligation under international human rights and humanitarian law is a prerequisite for moving forward with substantive process.

A close look at decade-long half-hearted attempts at undermining the accepted norms and principles to address transitional justice concerns reflects the lack of two required elements—political commitment and confidence of the stakeholders. It is evident that the lack of commitment from those in authority is what has lingered the process so far. This also has created an atmosphere of frustration and distrust among victims and members of their families.

Thus any transitional justice apparatus put in place without ensuring political commitment and confidence of stakeholders, primarily victims and their families, is destined to fail.

Doing it right
Past efforts made by the government have been deemed substandard and below the accepted legal threshold in terms of provisions incorporated. The Supreme Court in its landmark judgment in case of Suman Adhikari has struck down several provisions of TRC Act to ensure its compliance with the ideals of justice and Nepal’s expressed commitment towards international legal instruments.
The ongoing amendment of TRC Act gives the government an opportunity to do things right this time with transitional justice. The basics of transitional justice to which no compromises can be made are evident in legal documents. There is a wide array of literature, state practices and normative guidelines for Nepal to refer to in order to come up with an acceptable and functional mechanism.

In this backdrop, where Truth and Reconciliation Commission (TRC) and Commission for Investigation on Enforced Disappeared Persons (CIEDP) have failed to impress and  intent and good faith towards transitional justice is being questioned, amendment of TRC Act, its process and outcome will be the  main indicators of what we can expect in the days to come.

Stay committed
The two basic elements that are prerequisite to success of the transitional justice process are political commitment and confidence of the victims in the apparatus set forth. The apparatus, however ideal it may be, cannot attain the desired end if there is lack of political will and commitment on part of those in power. Second, the major part of the process, the victims need to feel assured that justice will be delivered.

The amendment process itself should accommodate views and aspiration of the victims and stakeholders concerned to start building up the long lost confidence and trust. The political commitment must also be well spelled out to ensure that the transitional justice isn’t just a ritualistic effort to show and tell. The government and those in power must commit that they are ready to do what is right and just to address past wrongdoings.

Only with commitment from the government and confidence from the victims, can transitional justice be accomplished within accepted normative and legal framework. In absence of any of these elements, we won’t be able to achieve the desired outcomes.

Eyes on Nepal
For Nepal which is seated in UN human rights council addressing the transitional justice is not a domestic issue. It has a wide domestic and global attention affixed on it. The domestic and international experts, right based groups, watchdog organizations are observant about the development in Nepal. The amended Act and the apparatus set up and its functioning will at all times be under the scrutiny of observant.

The transitional justice process and apparatus must meet the legal benchmark set internationally and must comply with Nepal’s obligation under international law.  The failure to do so will only reflect Nepal’s unwillingness and inability to deal with the issue. This will tarnish Nepal’s reputation and open up the prospect of exercising universal jurisdiction in other countries.

With all eyes on Nepal’s transitional justice process, we have the opportunity to make it better and result-oriented. It is an opportunity for Nepal to send a clear message on our effort to address the past wrongdoing and prove our commitment to peace and justice.

The government effort to address transitional justice will give out a clear message on its stand on human rights, rule of law, rights of victims and broader principle of justice. This is both a challenge and an opportunity for the government to reaffirm its commitment towards human rights standards and generally recognized principles of justice.

Beyond technicalities, transitional justice should also focus on building a peaceful and just society. It should balance the idea of both peace and addressing past wrongdoings. In doing so, the apparatus and process must comply with Supreme Court’s order, applicable international law and accepted principles and practices of transitional justice.

The cardinal question that lies at the center of the debate is: Is the government committed enough to do what is right and just?

The author is an advocate with specialization in human rights law  barunghimire123@gmail.com

Newly found planet could be just right for life

WASHINGTON, April 20: Astronomers have found yet another planet that seems to have just the right Goldilocks combination for life: Not so... Read More...

The most basic thing you can control while applying makeup to make sure you don’t look like a clown when... Read More...

US Acting Assistant Secretary Trudeau in Kathmandu
21 hours ago

Over 10,000 people enter Nepal via Gaddachauki in a week for Dashain
20 hours ago

KMC will continue its programs according to its policies: Mayor Balen
1 hour ago