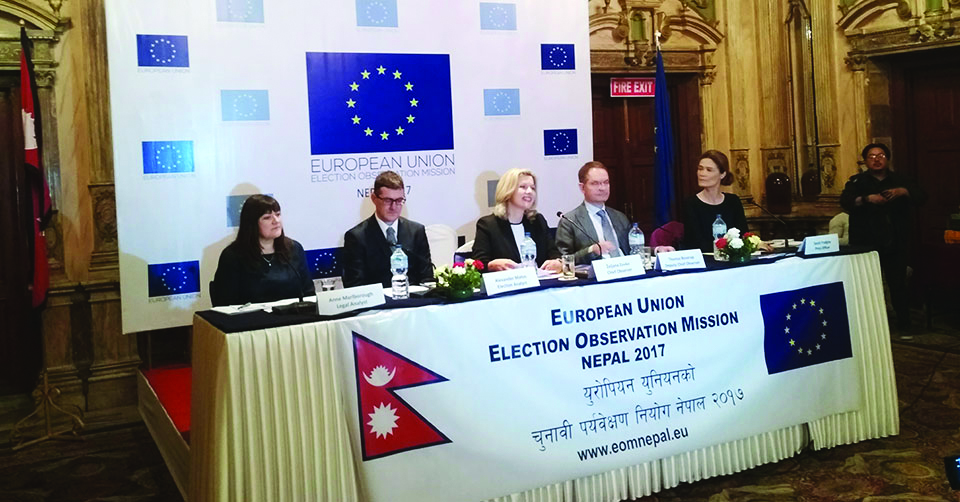 The EU report treats Khas Arya as the source of all problems. It has tried to create rift and division in closely integrated Nepali society

European Union Election Observation Mission to Nepal (EUEOMN)’s election report became the subject of heated debate in Nepal’s social and political spheres. This was natural for this questionable report came at a time when the country is getting back on stability path after eight years of debate and counter debates on the provisions that were finally enshrined in the constitution. Drafting constitution through people’s representatives was a dream deferred for Nepalis. It had been envisaged back in 1950, it came true only in 2015.

The prolonged transition that started after signing of Comprehensive Peace Agreement between warring Maoists and parliamentary forces in 2006 came to an end along with promulgation of the constitution—ratified by over 90 percent of lawmakers in Constituent Assembly. Under the same constitution, the government in 2017 held three levels of elections successfully. EU representatives were allowed to observe these elections but EU did much more than that.

It started to make comment on Nepal’s constitution and political system set by this constitution. Ignoring Nepali social dynamics, it suggested excluding ‘Khas-Aryas’ from reservation quota though there is no provision of reservation for Khas Arya in the new constitution. ‘Proportionate inclusion’ of all ethnicity is the provision we have. Clearly, EU is interfering in Nepal’s internal matters.

Social justice is crucial for country’s stability. Nepali society is complex and largely made up of migrants who came to this land years ago from the north and south. Mainly they are Indo-Aryan, Caucasoid and Tibeto-Burman or Mongoloids/Kirat. Caucasoids are caste-based and Mongoloids are tribal-based communities. They migrated in different time periods. As tribal communities, Tibeto-Burman prefers to be called janajatis (indigenous). Whatever our origins, we have been living together with perfect harmony for ages. Apparently, this is not what EU wants to see.

However, given the history of Europeans’ ill designs in Nepal, we should have been cautious already. King Prithvi Narayan Shah was cautious enough not to allow British mission from the very beginning of his unification campaign. It was Jung Bahadur who made it easier for Britishers in the south to interfere in internal politics. Even Panchayat regime had introduced a regulatory mechanism called Social Service National Coordination Council in 1985 to coordinate and systematize foreign aids in socio-economic sector. Back then some donors, who were bent on creating social division in the country, had expressed aversion against this rule.

The EU played dubious role during Maoist rebellion. EU stood behind them while they were fuelling separatist feeling among janajatis.

ILO’s Article 107 of 1957, first of its kind, defines indigenous people as those who are backward and need to be included in national mainstream. Many Nepali of Indo-Aryan origin living in the western high hills belong to this category. They are not only backward, but also need state support in health, education and livelihood. People of Tibeto-Burman origin get priority in British and Indian armies. Perhaps because of this, they are much better off than Khas of western hills.

EU, which wants us to exclude ‘Khas-Arya’ from proportional system, is perhaps inspired by Nepal’s ratification to ILO Convention 169. This article adopted in 1989 redefines ILO 107 and guarantees rights to indigenous people with recognition of separate culture, unique life-style and tradition.

Out of 193 member states of the United Nations, only 22 including Nepal ratified ILO 169 in August, 2007, while none of the member states that exercise veto power have done so. Even countries like India and Australia, which have large number of indigenous populations, have not.

ILO 169 is confusing. It defines indigenous people as those who are completely different from other national communities, or who have been living before the colonial rule or before being defeated by outsiders or before the present demarcation of the state was fixed. None of these conditions apply for Nepal. For one, Nepal was never under colonial rule. King Prithvi Narayan Shah who unified this country was not an outsider. And demarcation of borders of Nepal was settled long time before ILO 169 came into existence.

In Nationalism and Indigenous Peoples of Nepal late Dr Harka Gurung mentions that there are two combined tribes in Nepal—mangols and aryans—both migrated from outside. Hence there are no original tribes in Nepal.

Nepal Federation of Indigenous Nationalities (NEFIN) has been advocating for their rights, but after restoration of multi-party democracy in 1990, dozens of different ethnic groups, languages and religious practice were constitutionally recognized. But majority of them failed to produce their separate script, common language and history of origin to prove they belong to indigenous category.

Migrants displaced and deprived of indigenous people their rights in Africa, America and Australia. ILO 169 was adopted to protect them. In Nepal there is no history of one community displacing others and depriving them of their basic rights. Many points to unification campaign of King Prithvi Narayan Shah to prove displacement argument but they forget that unification was basically an internal campaign. No foreign forces were involved in this process.

Although Nepal is multi-ethnic, multi-lingual, multicultural and multi-religious country, Tibeto-Burmans are only considered indigenous under the ILO 169 ignoring the important role of Khan-Aryas in unifying modern Nepal. It has been dealt as if Khas Arays were the enemies of the nation or that they never existed in this land.

The EU report treats Khas Arya as the source of all problems. It has tried to create a rift and division in closely integrated Nepali society.

Looking back, it is curious how the government of the day proposed ILO 169 for ratification in the legislative parliament in 2007 and submitted to ILO? We are facing the consequences now.

Prime Minister KP Sharma Oli rightly warned EU not to interfere in internal affairs. Now his government should bring the bill in the parliament to scrap Nepal’s ratification of ILO 169. Will he do it?

The author is strategy and security analyst

By far the most important responsibility that has fallen on the shoulders of new Prime Minister Sher Bahadur Deuba is... Read More...