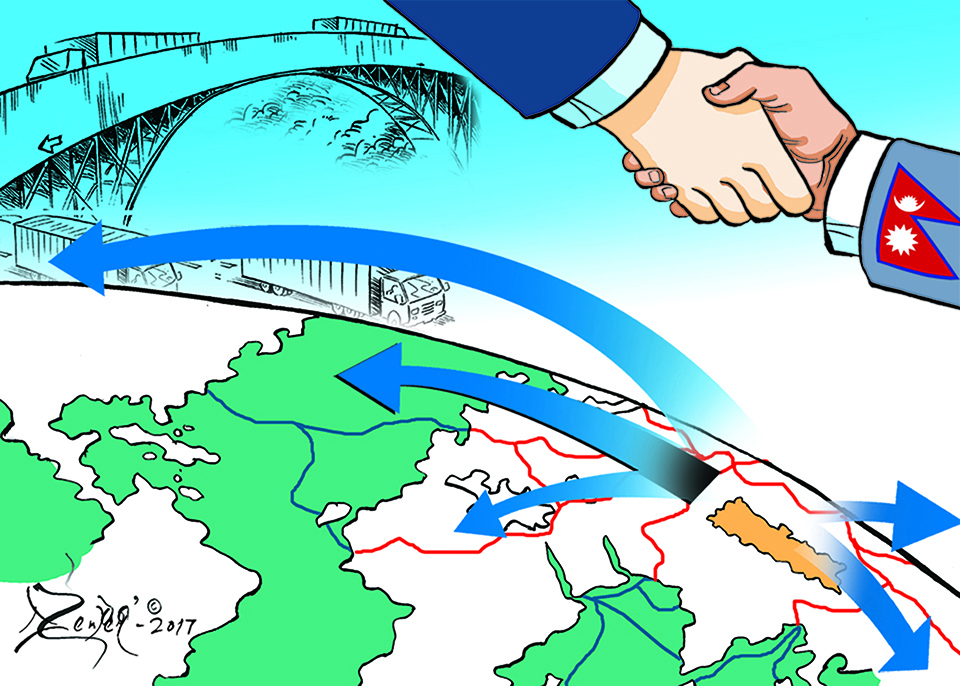 For South Asia, which has poor infrastructures, various development projects of China’s Belt and Road Initiative (BRI) can have a greater positive impact in respective countries if they take up those projects with wisdom and caution. However, in the recent times, narrative of debt trap and specter of colonialism have been deliberately raised to downplay the importance of BRI and to mislead the common people of this region who are already much below the poverty line.

It took Nepal four years to sign the framework agreement on BRI in 2017. Nevertheless, we   still have lots of gaps to fulfill on our part starting from the policy coordination, formulation and implementation of its true spirit by integrating it with our national development strategy where many aspects of connectivity, infrastructure development, technology transfers and other areas are of utmost necessity. Urgency has been felt to intensify the value chain by taking up these connectivity projects. Nation’s unparallel touristic, agricultural and other potentials cannot be realized without this.  We cannot afford to sit on the fence and discuss further about US, India, EU’s perceived strategic threats within this initiative.

It may be noted that our growth rate was all time high of 8.60 percent in 1993 and a record low of 0.10 percent in 2001. Now it seems to grow by only 5.9 percent. Nepal’s economic condition was perhaps better than India’s and China’s in the 1940s. But despite having huge resources and very energetic hard working human capital, the sovereign independent nation has failed to get along with these mighty neighbors which have emerged as super powers.  Much has been said earlier about our political leaders and also bureaucracy relating to corruption. As nation embarks on a republican setup and welcomes many bilateral and multilateral economic cooperation mechanisms including BRI, it has raised the possibility of a brighter development future.   But we have not been able to gain anything of substance out of these. At the same time, many Nepalis are still unaware of what BRI entails for us. The government has not been able to come up with a concrete vision to optimize BRI advantage.

Major powers which enjoyed unilateral hegemony feel challenged by rising China and aim to disrupt her economic trajectory by designing strategic imbroglio.  The issues in South China Sea, China’s economic power  projection and Tibet and Xinxiang come to the Western mind as “core issues.”  India, on the other hand, is adamant against strategic interest in South Asia. Every Nepali has started to think about the possible future power battle.

Many BRI related seminars and interaction programs are being organized in this region.  In November this year, a seminar was organized in Kathmandu where many spoke against BRI. It is unfortunate to experience the vocal campaign to portray BRI as a zero sum game.

Recently some professors from Leshan Normal University of Sichuan had visited our institute. They made inquiries about weak progress on Nepal’s part on taking BRI projects forward, even while many nations like Bangladesh, Sri Lanka, Pakistan in South Asia and Myanmar, Malaysia, Thailand, Indonesia, Cambodia, and Laos in South East Asia have enthusiastically jumped on the bandwagon.

Few Indian scholars argue that if China’s influence in South Asia grows, India will be faced with the challenge of managing its relationship with its biggest neighbor (China) and competing to maintain its prominence in the region. India’s national interest claim is weird in regard to BRI.

Nepal becoming a part of BRI framework has attracted the attention of the US and its allies. Chinese investments under BRI might alter the US dominion of last 70 years in the region.  But we have to evade their influence to ascertain our credible choice even amidst growing US-India alliance.

Although Nepal’s financial standing is much less significant compared to those of big powers we should not forget that our significant geo-strategic location in Trans-Himalaya and BRI projects demand that Nepal play a greater role in the region.

Enhanced people-to-people connectivity can help. With projects of infrastructure facilities, connectivity and trade, Nepal will stand in better position with BRI. But our leaders need to be willing, sincere and committed to utilizing BRI for Nepal’s advantage.

The author, former Spokesperson of Nepal Army, is a CEO of Nepal Institute for Strategic Studies