Disputes in Mid and Far West over local restructuring 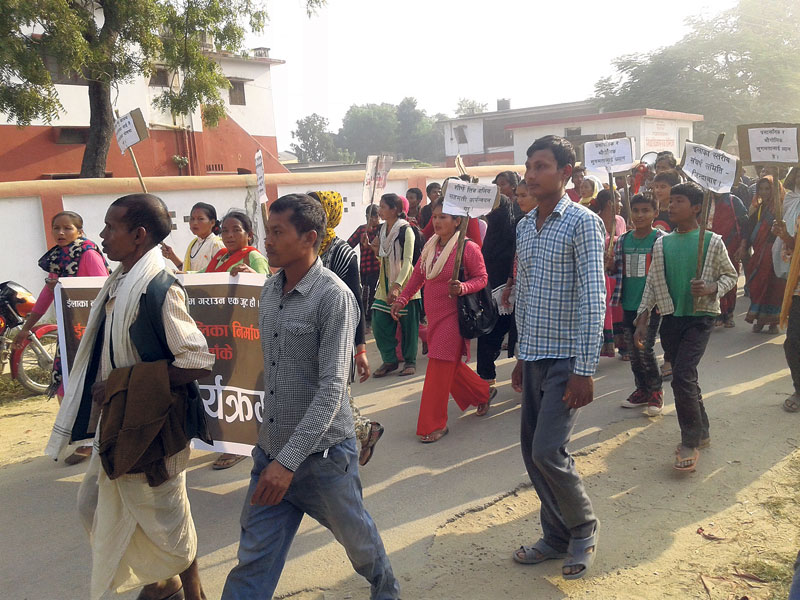 Locals protesting in Nepalgunj this week demanding revision of the borders of local units in the district. Photo: Arjun Oli/Republica

KATHMANDU, Nov 24: Dismayed with the proposed restructuring of local bodies, locals in the mid and far-western regions of the country have started protests in their respective districts, demanding changes in local level delineations.

They have accused senior political leaders of trying to make changes without consulting them and ignoring calls from local parties and the technical committees formed at the local level to assist the restructuring task.

In Bajhang, people from Kanda Village Development Committee have been staging a sit-in at the district development committee office, saying the village council as proposed by the government should be revised. They complained that the proposed village council would not be accessible for them. They have demanded the inclusion of Kada VDC in the proposed Melbisauda Village Council. Ran Bahadur Bohara, former chairman of Kanda VDC, said his VDC was not declared a separate village council as promised by local politicians.

Protesters have padlocked the offices of Phattepur, Binauna, Gangapur and Matehiya VDCs in Banke. Harishankar Pandey, spokesperson of the protest committee formed to oppose the local body restructuring in the district, said they would continue the protests unless their demands are addressed.

"The proposed village council is not accessible for us. So, we have been demanding that our ilaka be declared a village council," said Tara Kasera, coordinator of the protest mobilization committee in the district, adding, "We will initiate strong protests if our demands are not addressed."

Locals of Pokharathok, Chirtungdhara, Helang, Tahu and Bahadurpur and Chidipani VDCs are also miffed over the restructuring of local bodies in their areas.  Locals from Pokharathok and Chirtungdhara have submitted a memorandum to the Local Bodies Restructuring Commission, demanding corrections to the existing village council. They have demanded that an accessible place should be declared a village council, taking into consideration the geography, economic growth and physical infrastructure. "The leaders have declared village councils only seeing them as election constituencies," said Raj Kumar Panthi, a local of Chidipani adding, "Locals cannot benefit if the restructuring is done in this way."

Politicians, however, have cited multiple reasons for failing to accomodate the concerns raised by locals. "We cannot declare Kanda VDC a separate village council in Bajhang because it lacks the population," said Harka Jung Singh, president of Nepali Congress Bajhang.

Singh said a population of at least 3,000 is required for declaring a VDC a separate village council.

Ram Prasad Pandey, local development officer in Palpa, said he was ready to reconsider the borders of local bodies if the commission allows him to make the changes.  He warned that a crisis could emerge if the genuine concerns of the locals are ignored.

Jiblal Bhusal, local development officer in Banke, informed that efforts are underway to resolve the disputes through discussions. Bhusal, however, has refused to do anything against the criteria set by the commission.

KATHMANDU, Aug 13: The restructuring of the local bodies has become a new bone of contention among the political parties... Read More...