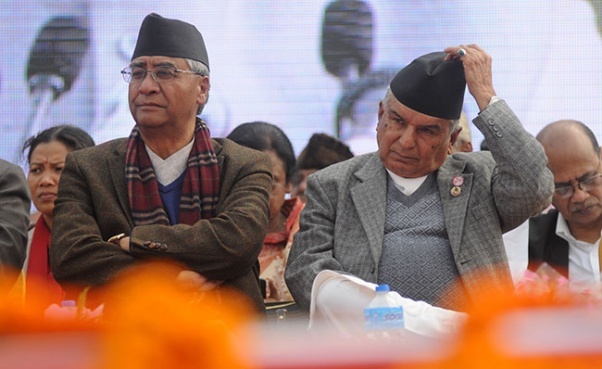 KATHMANDU, July 25: The delayed expansion of the cabinet has been deferred yet again following a dispute between Prime Minister Sher Bahadur Deuba and  rival leader Ram Chandra Paudel over the sharing of ministerial portfolios.

Individuals  familiar with  internal disputes within the ruling Nepali Congress (NC) said the cabinet expansion plan was deferred for Wednesday after the Paudel faction demanded at least five ministerial portfolios against a previous understanding on four portfolios. The Paudel faction has maintained that they would not send even a single minister into the cabinet if they are denied five portfolios.

Of the 13 ministerial portfolios allocated to NC, Deuba has promised one ministry each to the Krishna Sitaula and Khum Bahadur Khadka factions. He has already appointed three ministers -- Gyanendra Bahadur Karki (Finance), Gopal Man Shrestha (Education) and Farmullaha Mansoor (Labor)--from his faction.

KATHMANDU, Aug 24: The ruling coalition Nepali Congress has witnessed mounting dispute on the selection of leaders to join the... Read More...