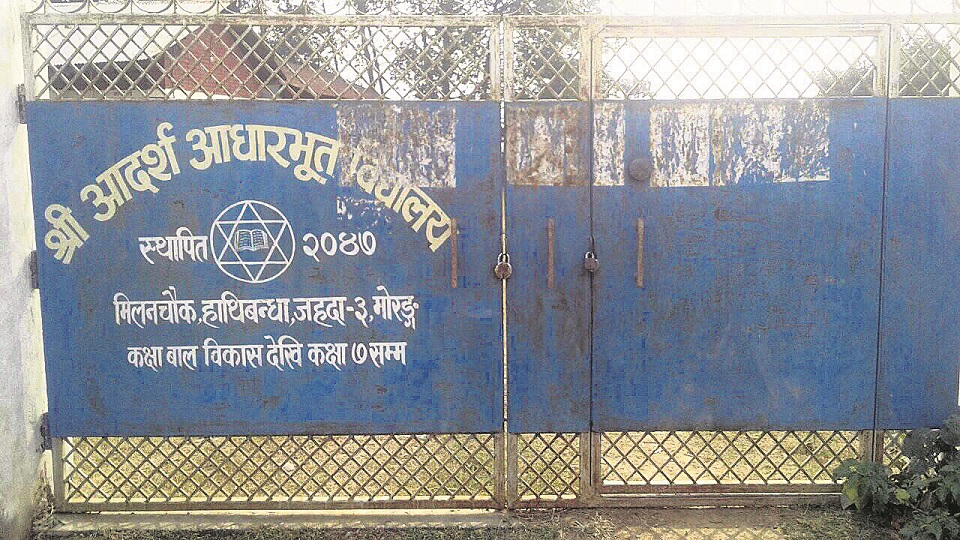 Adarsha Basic School, Jahada, Morang district, remains closed for the past one month due to disputes over the appointment of the principal of the school.

BIRATNAGAR, Jan 30:  Depriving students of their right to education, Adarsha Basic School of Hathibanda, Jahada Rural Municipality - 3 of Morang district remains closed for a month now due to disputes over the appointment of principal.

There are two groups which have been lobbying for their preferred candidate for the appointment. As they have not been able to settle it, the main gate of the school has been padlocked.

Though classes were halted since a little earlier, the gate was padlocked on 2 January. The earlier school principal Rajkumar Sah retired 10 months ago. Since then, problems surfaced in the school affecting its day to day operation.

Before retirement, Sah had handed over the responsibility to one of the teachers, Muga Herman. The school management committee and the ward office had also recommended that he be formally appointed as the new principal.

But the rural municipality, which takes the final decision, appointed another teacher of the school Ashok Sah as the new principal. And this triggered tension in the school.

According to Govardhan Sah, the rural municipality did not act wisely.

As a result, the school is in a mess affecting the education of dozens of students. "The rural municipality ignored the recommendation of the ward and the school management committee. This brought troubles," he said.

A group of teachers in the school have been asking for transfer of the newly-appointed principal Ashok Sah let alone cooperate with him as the principal. Until and unless he is transferred elsewhere, the school will not come back to earlier form, dissatisfied teachers have warned.

"There is a huge problem now. Unless he is transferred, things are not going to get smooth," Govardhan  Sah said.

Meanwhile, chairperson of Jahada Rural Municipality, Kailash Prasad Mandal, stated that Muga Harman is not fit to become the new principal as he has been working in the school under relief quota. "It is not appropriate.

He is a teacher under the relief quota and not a permanent one," Mandal said. "So, we appointed Ashok Sah as the new principal," he clarified.

He further stated that the rural municipality has been trying hard to help end the dispute. It has even tried to take the help of the district administration office for it.

"We have sought the local administration's help in this regard," he said. "Police should remove the padlock," he added.

Meanwhile, Anuj Bhandari, assistant CDO of Morang, stated that it is the responsibility of the rural municipality itself to resolve the problem.

"We are ready to provide security as they want, but about solving the dispute others can't help. It is the responsibility of the concerned rural municipality itself," he said.