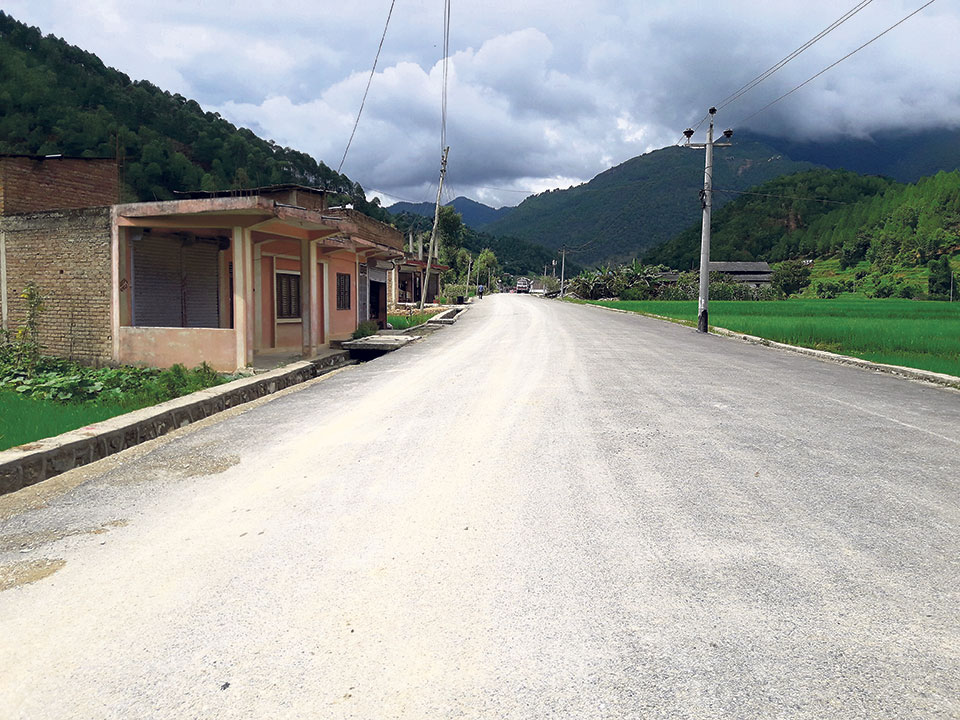 A blacktopped section of the Saljhandi-Sandhikharka-Dhorpatan road. Photo: Laxman Ghimire

ARGHAKHANCHI, Feb 19: Even though the construction of the Saljhandi-Sandhikharka-Dhorpatan road started a decade ago, the project has seen very dismal progress as only a five-kilometer stretch of the road has been blacktopped till date.

As there has been no significant progress, the project is preparing to scrap the contract with the construction company, said an official of the project.

The contract of the 196.2-kilomter road stretch was handed to Biti Jaya Baba JV Swoyambu in 2013. As per the contract, the road should have been blacktopped within four years. But, there has been no progress after December, 2014.

The road project is an alternative to the Tansen-Siddhababa road section. After the completion of the project, residents of Arghakhanchi will reach Butwal in two hours.

Of the 196.2-kilometer road, 10-kilomter is blacktopped; 56-kilometer is graveled, while the remaining 100-kilometer is off-road. Of the 10-kilometer completed road, a five-kilometer stretch was blacktopped before the contract was awarded to Biti Jaya Baba JV Swoyambu.

Till date, a total of Rs 1.50 billion has been spent for the project including the preparation of the detailed project report (DPR). As per the DPR, the estimated cost of the project is Rs 8 billion.

The completion of the project is expected to play an important role in tourism development of the region.

According to Ramji Prasad Ghimire, a member of the provincial assembly, the project will promote the tourist and religious destinations of the region. “We have been taking initiatives for the project work to resume at the earliest,” Ghimire said.

Likewise, Kamal Prasad Bhusal, mayor of Sandhikharka Municipality, said that the municipality is also taking initiatives for the resumption of the project.

Mayor Bhusal further added that the completion of the project will promote tourism in the region.

Photos of Minister, Secretary and DG of Road Department pasted on public buses

DOLKHA, Nov 13: Locals have protested against the minister, secretary and director general of the Department of Road (DoR) for... Read More...

DAMAK, May 27: Initially planned to be completed in 18 months, the construction of the four-lane Birtamod- Bharatpur road has not... Read More...