Dishes to drool over

We have all watched videos on Buzzfeed and Tasty of American barbeques and elaborate sandwiches that made us think, “these Americans really know how to work their meat”. However, when it comes to the availability of these authentic foods here in Nepal, the restaurants in Kathmandu don’t have much to offer, except for regular burgers and grilled chicken wings. And these, I must admit, look nothing like what we see online.

Flat Iron Grill, located on the premises of Hotel Ambassador in Lazimpat, Kathmandu, hopes to change that. Started it 2015, in the past it catered mainly to expats but ever since opting to have their food delivered through Foodmandu, they have gained a large Nepali following as well.

Shibani Simha-Swiger, co-owner of Flat Iron Grill, says that her husband Brian Swiger and his partner Raju Rijal are the brains behind the whole concept of Flat Iron Grill. The meat, sauces, and the bread are all made in-house by their own team at the restaurant. “Whatever we don’t make or produce, like vegetables or honey, we make sure to get them locally sourced,” she says.

As the restaurant is located on the ground floor of Hotel Ambassador, the interior has been done to go along with the hotel’s decor. The high ceiling and the minimalism in decor, along with the glass walls on two sides, give the place an airy and spacious vibe. Moreover, there is a collection of vintage flat irons showcased on wooden platforms that help add a kind of charm to the place besides going really well with the name of the restaurant. Moreover, brass and metal sculptures of pigs add a sense of aestheticism to the place.

The signature dishes of the restaurant are the ‘Pulled Pork’ and “The Himalayan Rueben’ (reviewed below). They also have an array of fantastic desserts like cheesecake, éclairs, lemon tarts, etc. all of which are simply amazing to look at. Flat Iron Grill also hosts ‘Fired up Fridays’ where one can go and enjoy different off-menu delicacies like tacos and chicken wings every week. 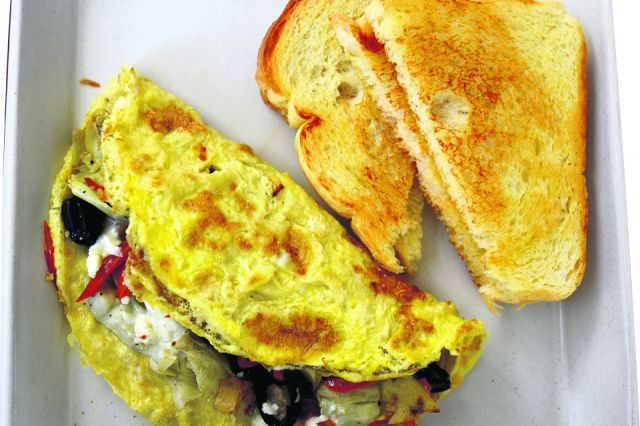 A part of their Breakfast menu, the Greek omelet with toast makes for a light yet flavorful meal. The omelet has artichokes, olives, tomatoes, onions, roasted red peppers, and feta cheese. The dish offers a variety of taste – sourness from the olives, buttery flavor from the egg and cheese, and sweetness from tomatoes and onions – without any of it being too heavy on the palate. It is filling yet you don’t feel weighed down by your meal – just the right dish to start your day with.

In the case of pulled pork, the way it’s made says it all. The pork is slow-smoked for as long as 17 hours, after which it’s flavored with BBQ sauce and served on a sesame bun. The pulled pork was soft and tender. The sweetness of the BBQ sauce added newness to the dish, especially in context to our Nepali taste buds. The bun provided neutrality to the dish which otherwise might have been a little too flavorful. I also recommend you get yourself a bowl of yogurt or a salad afterward. Moreover, there was also a side of their in-house potato crisps that complemented the dish really well.

Three words: bacon, egg, and cheese. All this goodness wrapped up in a sesame bagel makes this dish an absolute delight. The bacon was crisp and chewy, the egg was pleasant, and the cheese added the final touch of making this bagel dish a pure delight. But all the fat and greasiness from the egg and bacon tend to numb your tongue. However, this is where the fresh fruits, yogurt, and the muesli come in. They cleanse your palate.

Half Himalayan Reuben with Half Carrot Ginger Soup
Price: Rs 260 and Rs 300

I was personally very excited to try the Himalayan Reuben because of the sauerkraut and the mutton pastrami. Along with these two ingredients, the dish included cheese and their own Russian dressing, all placed in a baguette. The portion is actually a half (meaning you can order the same dish but a bigger portion) and it was complemented by a half carrot ginger soup. The sandwich, though it looked a bit intimidating, was surprisingly light. The tanginess of the sauerkraut went wonderfully with the tender pastrami, the in-house Russian dressing, and the cheese to make a delicious sandwich. The carrot ginger soup was fragrant and had a healthy, warm taste to it. There was also a generous helping of potato crisps on the side. If there were one word to describe this dish, it would be fresh. The honey mustard salad consisted of crumbled blue cheese, candied walnuts (which were to die for), apples, pomegranate, red onions, and their own honey mustard dressing. It tasted like a bowl of goodness. The pomegranate added a dash of sweetness and the honey mustard dressing was really flavorsome. The veg Caesar salad wrap was basically a flatbread stuffed with artichokes, roasted red peppers, black olives, and Himal Grana cheese, all drizzled with Caesar dressing. The combination of the wrap and the salad was natural, neutral, and flavorful.

Until a few months ago, I used to be very rigid about my food choices. I knew what I liked,... Read More...

HAN to unveil cook book and video of 30 Nepali dishes