Discord in ruling NCP over agreement with CK Raut 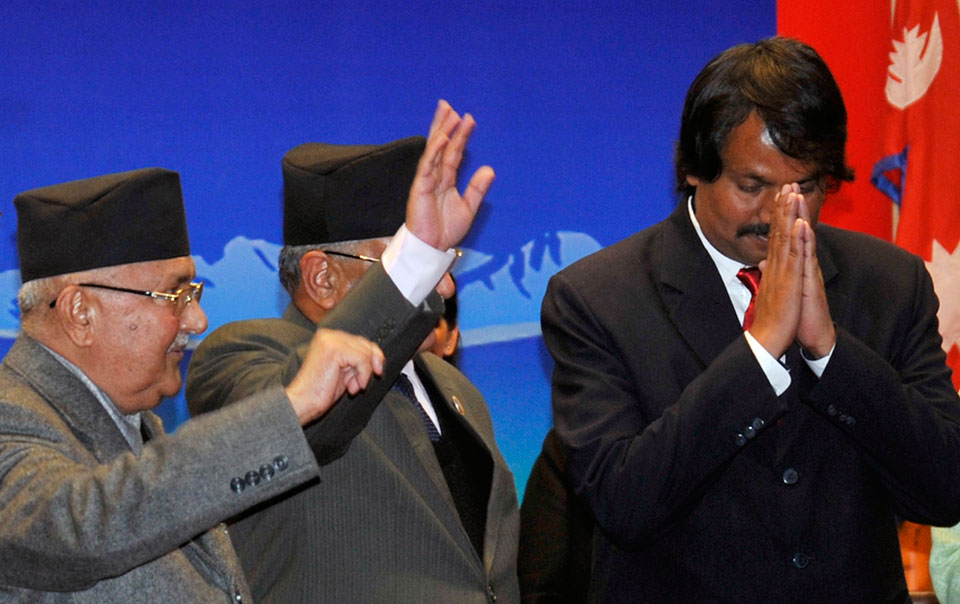 KATHMANDU, March 9: A section of the leadership of the ruling Nepal Communist Party has expressed discontent over the process followed to bring CK Raut into mainstream politics and the content of the agreement reached with someone accused of campaigning for secession. They said one could not conclude from either the agreement process or the language used in it that Raut has denounced his secessionist movement.

Some secretariat members of the NCP attending a meeting organized to endorse the agreement with Raut have cautioned party Chairmen KP Oli and Pushpa Kamal Dahal ‘not to fall for someone else’s grand design’. The disgruntled leaders said Raut has nowhere mentioned that he has abandoned his movement. Also, the prime minister’s presence during the function at which the political agreement was announced was beyond the requirement of the occasion, the disgruntled leaders claimed.

“CK Raut has said that he will fulfill his demands through the people’s mandate. This is his old position. It seems he is legalizing what he has been doing to go on to the next round of his movement,” said a secretariat member adding, “And our prime minister and others have fallen for the grand design of someone else.”

NCP leaders Madhav Kumar Nepal, Bamdev Gautam and Narayankaji Shrestha had objected to the government signing any agreement with Raut.

They say they are worried as he has not used a single word denouncing his secessionist movement. “Why was the deal reached between CK Raut and the government couched in language befitting an agreement between two countries?” wrote NCP senior leader Bhim Rawal.

Rawal has urged party leaders to unearth the mystery behind Raut’s refusal to admit his mistake in threatening to split up the country in previous utterances.

Meanwhile, the main opposition Nepali Congress has asked the government to clarify whether the wording ‘people’s mandate’ in the deal meant a referendum  for deciding territorial integrity. “The government should say so if no referendum is involved. Otherwise, [the government] should clarify the issues of the referendum, the selection process, methodology and dates and causes.” said NC Spokesperson Bishwa Prakash Sharma.